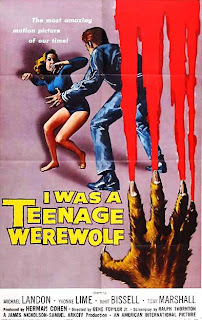 ...aka: Blood of the Werewolf

Directed by:
Gene Fowler, Jr.
Up until the point this film was made, producers had really underestimated teenagers, their love for the horror genre and how much of a dent they could make at the box office if there was a film that directly related to them. And that's something really hard to imagine these days, where it seems like theatrically-released horror films geared toward an adult audience are few and far between; with the majority of big screen genre releases rated PG-13, cast with flavor-of-the-week CW Channel model types of limited (or no) talent and edited like a music video to help ADD-addled brains fight the temptation to start clicking cell phone buttons in the darkened recesses of our nation's cinemas. However, things were quite different back in 1957, when horror films were primarily considered adult fair. That all changed with the release of this film.
.
Thanks to a brilliant last-minute title change (it was originally called BLOOD OF THE WEREWOLF), obvious parallels between its angst-ridden lead and Jim Stark (played by James Dean) in the hit REBEL WITHOUT A CAUSE (1955), issues concerning everything from teen dating to how parents just don't understand, an ear for teen lingo of its day and a marketing campaign designed to draw attention to the high school setting/teen appeal, this caught on with a younger audience in a big way. Suddenly a small film meagerly budgeted at 82,000 dollars went on to become a smash hit, raking in millions during its original run. Others immediately tried to cash in, leading to I WAS A TEENAGE FRANKENSTEIN (1957), MONSTER ON THE CAMPUS (1958), TEENAGE MONSTER (1958), TEENAGE ZOMBIES (1959), TEENAGERS FROM OUTER SPACE (1959) and others. Teenage Werewolf is also notable for being the first lead role for actor Michael Landon, who'd go on to become a huge and enduring television star for playing Little Joe Cartwright on Bonanza, Pa Ingalls on Little House on the Prairie and angel Jonathan Smith on Highway to Heaven.
.
At Rockdale High School, juvenile delinquent Tony Rivers (Landon) has a tendency to "hide behind jive talk," scream and explode into violent rages. Yessir, he has some major anger management issues and is rather easy to set off. Make a loud noise near him and he'll pummel your face in. The troubles may be stemming from home. Mom's dead and while dad's a nice enough guy, he's a weak disciplinarian who keeps long hours at work and doesn't get to spend much time with his son. After getting into a fist fight with his friend Jimmy (Tony Marshall), a local police officer (Barney Phillips) suggests Tony visit psychologist Dr. Alfred Brandon (Whit Bissell). Tony's resistant at first until his rage gets the better of him at a Halloween party, so he finally breaks down and goes to see Brandon, hoping he can help him control his rage. Instead, evil Dr. Brandon sees the perfect specimen for his regression hypnotherapy experiments. These sessions (complete with an injection of something-or-other) reduce Tony to his animal instincts and before long he's time-lapsing into a clawed, fanged, drooling, hairy-faced werewolf and attacking random people.
.
Tony kills his friend Frank (Michael Rougas) while he takes a shortcut through the woods late at night and then kills gymnast Teresa (May 1957 Playboy Playmate Dawn Richard) in the high school gym the following day. Faculty and students see the beast fleeing the school and recognize the jacket as being Tony's. Police are called in, a torch-carrying mob is organzied and the hunt is on for the teenage werewolf. Throw in a dog vs. werewolf fight and a random musical number (Kenny Miller's "Eeny Meeny Miney Moe") and the mix is complete.
.
The cast also includes Yvonne Lime as Tony's understanding girlfriend, Malcolm Atterbury (THE BIRDS) as the teen wolf's dad, Vladimir Sokoloff (MR. SARDONICUS) as Pepe the school janitor (who seems to know all about werewolves) and Louise Lewis (BLOOD OF DRACULA) as the high school principal.
★★★
Posted by The Bloody Pit of Horror at 10:57 PM

This is a great horror site.One of the best i found so far.Congratulation.