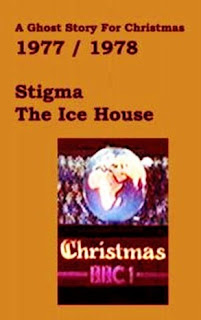 ...aka: Ghost Story for Christmas: Stigma


One of the later entries in the Ghost Story for Christmas BBC series, which lasted through much of the 70s; putting out one short film per year from 1971 to 1978. While doing some landscaping near a country home, a pair of workers attempt to remove a huge rock with a bulldozer. As the stone is lifted up, something sinister seems to be released from underneath. Suddenly, mum Katharine Delgado (Kate Binchy) starts to experience strange noises and visions, before noticing she's bleeding around her ribcage. Upon further inspection, there's no wound or cut; the blood seems to simply be coming from her pores. She wraps herself in a bandage and doesn't say anything, as not to worry husband Peter (Peter Bowles) and teenage daughter Verity (Maxine Gordon). Later that evening the bleeding seems to stop and Katharine goes to bed only the awaken the next day... And right here's where I better just stop with the plot synopsis.

Overall, it's a decent 32-minute short subject, with minor plotting and average acting. The premise itself is fairly creepy (as is a clever aerial shot at the very end of the film), though it doesn't quite get under your skin as well as A WARNING TO THE CURIOUS (1972), an earlier entry from the same director (Lawrence Gordon Clark). This one does have some nudity and blood in it, plus the great song "Mother's Little Helper" by The Rolling Stones is played. Followed by THE ICE HOUSE (1978), which ended up being the last "Ghost Story" until the series was briefly revived in 2000 with host Christopher Lee.

You're rather hard on this compelling and well acted film. The impact, as conjured by the stones of Stone Henge and the Druid ring at the end lend a sinister morass to the work. I think it's extremely well done, and unflinching. Quite good.

I plan on revisiting this one here soon so hopefully it'll make a better impression on me the second time. I didn't *dislike* it the first.