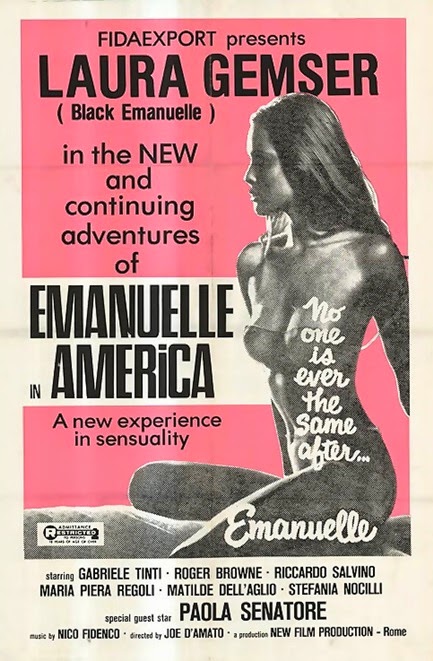 ... aka: Black Emanuelle in America


NYC-based photo journalist Emanuelle (Laura Gemser) knows she’s got the workings of a hot story when she travels through the labyrinthine underground sex culture with a secret camera, where one sexuality perversity leads to ten more, each more extreme than the next. Being the insatiable Emanuelle, she can’t help but participate in some of it, as well. D’Amato’s most notorious exploitation effort tries to cater to a variety of fetish, from the most basic to the most exotic. The sex in the Blue Underground uncut version is both soft-core and hardcore (the latter supposedly added by French distributors after the film was completed). The couplings range from the expected pairings (man/woman, woman/woman…) to a cake orgy in Venice, a tropical vacation retreat for sex-starved women and a whore-house complete with a notorious scene of requited female-equine love. It’s reputation as a major cine-shocker for sick movie buffs seems to hang solely on two portions, the first of which is the horse yanker scene (which really isn't even all that bad). The second is some strong and effective snuff film footage at the very end of the picture when Gemser hooks up with a "respectable" U.S. senator (Roger Browne). Shot on grainy film stock and with gore, torture and breast/vaginal mutilation galore, it does rise to the extreme level of repulsiveness sick movie freaks want. Otherwise, this Emanuelle outing is your usually badly dubbed, badly written and badly acted Euro sex flick with many gruelingly boring passages.

Gemser is certainly beautiful to look at, but she seems in a daze throughout most of the film (an exception being a look of mild discomfort while viewing the snuff footage). Italian horror fans should note the appearances of Gabriele Tinti (Mr. Gemser) and Paola Senatore as a rich Italian couple, Lorraine de Selle as a lesbian named Gemini and Salvatore Baccaro (Ook from FRANKENSTEIN'S CASTLE OF FREAKS). Also with adult film actress Marina Hedman. The original U.S. release was basically missing all of the content that makes it worth watching in the first place, so avoid all early video prints and go for the DVD (which also features decent interviews with both D’Amato and Gemser).