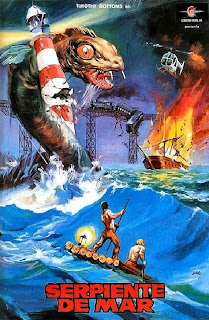 I would say that this seems to have time warped in from the 1950s, but I don't want to insult the far superior giant monster films from the 1950s in the process. An American military plane is having issues with their bomb mechanism. To try to prevent those pesky Russkies from getting their mitts on the top secret weapon, they're instructed to simply drop the bomb into the ocean and go on their merry way. After doing so, the atomic blast awakens a vicious sea beast that appears to be taking a nap on the ocean floor before it's revived. Soon after, local fisherman in a nearby Spanish fishing village have been reporting that most of the fish in the area seem to either be dead or have a strange, radioactive glow.

One of the boat owners gets desperate enough to hire Captain Pedro Fontán (Timothy Bottoms) - a recovering alcoholic with a not-so-great reputation - to take a crew out to sea to try their luck. On their trip, the boat is attacked by the monster. It sinks the boat and several men get gobbled up. Pedro, along with his first mate Lemaris (Jared Martin) and a few others make it back to safety in a lifeboat. Unfortunately for Pedro, Lemaris harbors a long-standing grudge against him because he blames him for his brother's death during a shipwreck. Lemaris denies the presense of the sea monster and gets the others to follow suit. During a trial, Pedro loses his captain's license and is set to go to court facing criminal negligence charges. Things aren't much better for Margaret Roberts (Taryn Power), who witnesses her drunken friend Jill (Carole James) get eaten alive by the beast. No one believes her either and she's locked up in a Portuguese nuthouse.

Some time passes and Pedro (now on the run from the authorities) somehow learns of Margaret's ordeal and goes to Lisbon to help her escape from the asylum. The two hide out in the area while plotting to prove the existence of the beast. They meet up with cranky but helpful marine biologist Timothy Wallace (Ray Milland), who believes their story and wants to help. Learning of another suvivor of a similar attack, the trio rush to a hospital, but they're too late. The man has already been smothered to death by a pillow by his irate boss (Jack Taylor)! Lemaris also shows up in the area hoping to hunt down Pedro and get revenge. Instead, he bears witness to a night watchman (Víctor Israel) getting set on fire and then eaten by the monster, which prompts a change of heart. Strangely, Lemaris acts like he didn't see the monster earlier in the movie as it attacked and killer several of his buddies, but oh well. Things lead up to an exciting (not!) finale where our heroes toss molotov cocktails at the monster from the sidelines and then... simply let it swim off to safety, without even informing the authorities OR proving its existence to anyone else. Uhhh...

Director Amando de Ossorio (credited as "Gregory Greens" in the anglacized credits) has a decent reputation in horror circles because of his sometimes-admired (but in my opinion, overrated) Blind Dead series. He had also made FANGS OF THE LIVING DEAD (1968) with Anita Ekberg, THE LORELEY'S GRASP (1973; which also involved a sea beast, but this time a sexy one played by Helga Line), NIGHT OF THE SORCERERS (1973), DEMON WITCH CHILD (1974) and others. This is by far the crappiest thing I've seen from him. Don't get me wrong, some of the other films listed above are also duds, but they're not outright incompetent. SERPIENTE DEL MAR is, and it skims by almost entirely on unintentional laughs.

One of the big problems is that the film is horribly paced. The film just torpedoes ahead, totally skipping over what one would assume should be key plot elements. None of the dialogue is interesting or humorous, the cliche-ridden plotline is utterly void of anything new or fresh, the acting by most is horrid or horridly wooden (though this is likely because of the atrocious - and goofy! - English-language dubbing), the musical score is an annoying, by-the-numbers cloning of John Williams' famous JAWS theme and by the time the film is over, one gets the impression they ran out of time or money or both to come up with a satisfactory conclusion. There's nothing worse than a film leading up to something, only to have that something be nothing.

The special effects are the sole saving grace of the film. Don't get me wrong, they too are awful, but they're also kind of cute and oddly entertaining to watch, anyway. The sea monster, designed to look like a giant snake, is laughably visualized with giant ping pong ball eyes and what appears to be wings. It has also been aptly described as looking like a giant sock puppet by many viewers. The fx team created both miniature models (used when the monster destroys large structures or transports) and a scale model (used for close-ups of the the cast thrashing inside to simulate being eaten). Over the course of the movie, the monster destroys several boats, a lighthouse, a helicopter (it headbutts it, making it flip over and explode) and a bridge. It even almost blows itself up at the very end when a train's last car (marked "ARAL"... and why no caboose?) comes loose, falls into the water and blows up. And yet our "overgrown worm" lives to see another day, anyway.

Showing up briefly in the film are Gérard Tichy (from Bava's HATCHET FOR THE HONEYMOON and many others), Charly Bravo, José Canalejas, Pilar Alcón and Bernabe Barta Barri. Director León Klimovsky (who had made some very enjoyable Euro-horrors back in the 1970s and really has a much better track record than de Ossorio, though he's not as well-known) also appears briefly as a doctor.

It has been released several times on VHS in the U.S. (the first issuing was from Lightning Video), but there's no DVD release as of yet. The original release title of this Spanish / U.S. co-production was SERPIENTE DEL MAR, which basically means "The Evil Snake." In America, we get the uber-generic title THE SEA SERPENT. It was also released as HYDRA: MONSTER OF THE DEEP and under other titles. By any name, it's pretty bad but enjoyable for a generous smattering of unintended laughs.

You can get it on dvd-r at ioffer.com.Seller's name is videodust84...