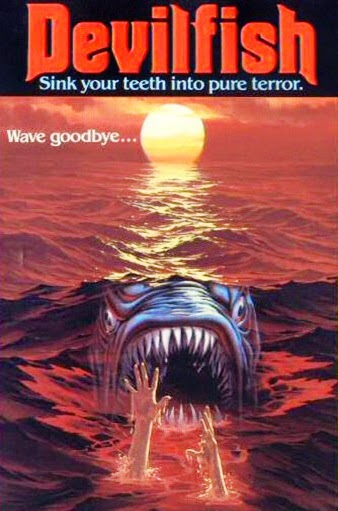 
A "40 foot long" giant mutant squid with five tentacles, razor fangs and the ability to reproduce its own cells terrorizes a small Florida town. Various marine biologists, doctors and cops plot to kill it. Meanwhile, a human monster named Miller (Paul Branco) offs people who discover the "Devilfish" is a man made creation used for the greedy benefit of some evil doctors. Miller attacks a lovely researcher named Florinda (Cinzia de Ponti), strangles her, drowns her in the bathtub, tosses in a hairdryer, then rips the panties off her dead body! Lots of false alarms are set when our heroes Peter (Michael Sopkiw, from MASSACRE IN DINOSAUR VALLEY), Stella (Valentine Monnier), Janet (Darla N. Wagner) and Bob (Lawrence Morgant) set out on a high tech (by 1984 standards, anyway) "Seaquarium" boat to catch the killer menace, who is frequently seen in close up or hilariously obvious speeded-up film to seem more menacing. And only fire can destroy it, which leads to a flamethrower-armed posse vs. aquatic beast finale.

Pretty bad and also pretty tame (other than a legless corpse and a decapitation) but faintly watchable import benefits from an excellent "Antony Barrymore" (Fabio Frizzi) score and a decent monster. It's currently smack in the middle of the IMDb Bottom 100 list, but really doesn't deserve it and is only there because it was featured on an episode of "Mystery Science Theater 300." Luigi Cozzi and Sergio Martino wrote the original story. The cast includes Gianni Garko as the sheriff, William Berger as the professor and Dagmar Lassander.