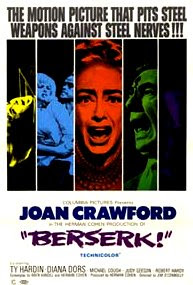 ...aka: Circus of Blood
...aka: Circus of Terror
Directed by:
Jim O'Connolly
At the Great Rivers Circus, aerialist Gaspar the Great's high wire act meets with tragedy when his tight rope snaps and somehow manages to wrap around his neck like a noose as he's falling; hanging him. Accident? The authorities seem to think so, but cold-blooded co-owner Monica Rivers (Joan Crawford) doesn't seem to care how he was killed. She doesn't hide the fact she thinks her performers are all expendable. She's all-business, all the time, and seems delighted that the publicity surrounding the death might increase box office sales. Hey, it's been a slow year! And just like in the 1960 gem CIRCUS OF HORRORS, that's just what happens; an occasional freak accident seems to bring the audience in in droves. Monica's frustrated business partner/part time lover Albert Dorando (Michael Gough) agrees that "People have a morbid curiosity about death" but is sick of dealing with Monica and demands she buy him out, forcing Ms. Rivers to use her feminine wiles to convince him to stay on for a bit longer ("I just may let you tuck me in tonight.") For starters, this is Joan Crawford and Michael Gough we're talking about and they're two of the effortlessly campiest people the genre has ever seen. Watching these two interact during the first few scenes is what I like to call camp nirvana. Actually it's almost too camp for this reviewer to handle. Well, almost. In any case, great stuff.

Arriving on the scene soon after the death of Gaspar is handsome, cocky performer Frank (Ty Hardin), who goes by the name "The Magnificent Hawkins." His act involves the dreaded "walk of death" where he walks a tightrope over a bed of razor-sharp bayonets while wearing a hood over his head. Both impressed by his act and by his physique, Monica decides to hire Frank as a replacement. Soon the two become lovers, and Frank starts to get a little greedy. He not only wants a big caravan with his name on it but also split ownership of the circus. Meanwhile, Albert is killed when someone hammers a spike through his head. This brings not only a Scotland Yard detective (played by Robert Hardy) to investigate, but also a cloud of suspicion that hangs over everyone at the circus. Monica and Frank are both chief suspects, but there's also Monica's faithful dwarf assistant Bruno (George Claydon), a strongman, a skeleton man, a bearded lady, a fortune teller and others who may have reason to be committing these murders. It's definitely a bad time for Monica's cherubic teen daughter Angela (Judy Geeson) to get kicked out of private school and return to the circus looking for work. And hard-drinking, tart-tongued tramp Matilda (Diana Dors) doesn't help matters either. She's convinced Monica is the killer and doesn't hesitate to let the world know how she's feeling. Even though she's married to magician Lazlo (Philip Madoc), Matilda tries to seduce Frank with a bottle of cheap booze in his trailer and is later involved in a memorable catfight with Marianne Stone. There's no shortage of suspects, but the eventual resolution is as illogical as it is unintentionally hilarious with the psycho, after finally being discovered, shrieking "Kill! Kill! Kill!" and darting out into the rain where he/she is immediately struck down by lightning!

In addition to the murders (including someone getting split in half with a giant electric saw blade), we get to see several long circus acts that really don't have anything to do with the plot, but do add to the overall atmosphere. Some viewers may find these tedious to sit through, but I liked watching most of them. There's a lion tamers act, a bunch of horses doing laps around the ring act and a knife thrower's act. There's also a great act involving 5-ton "Jody the Wonder Elephant," who walks over six women lying on the ground. My favorite act though is Phyllis Allen and Her Intelligent Poodles; which is basically a bunch of dogs doing a conga line, jumping through hoops, doing flips, jumping rope, dancing and walking the tight rope. It's a lot of fun, and the circus atmosphere itself is colorful and well presented in this film. There's even a musical number where four of the "freaks" do a song-dance called "It Might Be Me" while looking directly at the camera!

But when all is said and done, this entire film is pretty much dominated by that blistering force of nature known as Joan Crawford. As if being cast in a role obviously meant for someone in their mid to late 30s wasn't amusing enough, the 62-year-old gets to run around for much of the time in tights, panties and a ringmaster's coat (an outfit she admittedly still looks pretty good in). Flatteringly lit at all times (notice the shadows around her neck), with her trademark dark penciled-in eyebrows and her hair pulled back very tightly (is this what they did before face-lifts?) and complemented by some weird orange bun hair piece, she carries on entertainingly throughout. Much of her lines are either dripping with sexual innuendo as if written for a desirable young sexpot to recite or are extremely bitchy ("Look. Don't waste my time with these broken down has-beens. Some of them are as old as my elephants and twice as wrinkled!"). While you might squirm a little watching her awkward romantic scenes with her hunky male co-star (who was half her age when filming), it's still a blast to watch and is quintessential Joan in her twilight years the way we horror fans know her and love her.
Score: 6.5 out of 10
Posted by The Bloody Pit of Horror at 7:07 AM

Crawford’s character is played by a drag diva, David Cerda. The parity is actually a fusion of two of Crawford’s movies: 1964's "Strait-Jacket" and 1967's "Berserk”.

I now have to see the movie for more laughs.

That play sounds like it would be hysterically funny. What a great idea. I'll definitely check out those pics. Thanks for posting, Rodney!