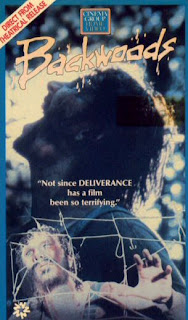 Directed by:
Dean Crow
A young couple (Christina Noonan and Brad Armacost), who pretend to be siblings but aren't (?), go hiking and camping in a secluded Kentucky forest. After Spam humor and a tent sex scene, they end up saving a young girls life. The girl's hillbilly father (Dick Kreusser) invites them back to his house for dinner, so they go and decide to stay a bit and help care for the little girl (Leslie Denise). William (Jack O'Hara), a drooling, toothless, bearded slob is the repulsive, retarded older son. He has a murderous past, kills animals, geeks chickens and watches the woman change clothes several times. Nothing much happens in the entire first hour (it plays more like a drama than a backwoods horror flick), so it's a relief when William finally goes nuts and starts attacking everyone. And it's all because Karen's hair is just like his late mothers (!?) While BACKWOODS isn't really anything special, it's actually pretty entertaining and has its moments. The cast is also pretty enjoyable; O'Hara is creepy enough to elicit chills and Noonan (not a bad actress) is a pretty good heroine who fights back, runs through the forest and sets up booby traps to help defend herself.
Filmed in Indiana as GEEK and very low budget, but worth a look fans of obscure backwoods horror flicks. If you want a somewhat similar and much more outrageous killer geek movie, check out LUTHER THE GEEK (1988).
Score: 4.5 out of 10
Posted by The Bloody Pit of Horror at 5:29 AM