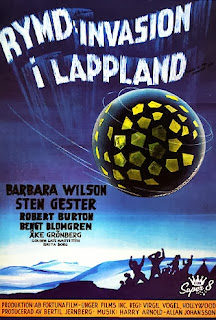 
Director Vogel began his film career as an editor in 1951. By the middle of the same decade he'd make his directorial debut with the somewhat fun THE MOLE PEOPLE (1956) and then became an in-demand TV director who worked on hundreds of television shows until his death in 1996. Here and there, he'd work on a low-budget movie. This is one of those, and it was made the same year he helped edit Orson Welles' masterpiece Touch of Evil (1958). As far as I can tell, Rymdinvasion i Lappland ("Space Invasion of Lapland"), a Swedish / US co-production filmed in English, received two different releases here in America after a 1959 release in Sweden. The first and (unfortunately) most common of these versions, which was a fixture on TV for years, was the one titled Invasion of the Animal People. Released in 1962, that version was victim of a Jerry Warren raping. He had it re-edited, cut out footage and then added new, cheap, talky scenes starring the original film's star, Barbara Wilson, plus new cast members George Mitchell, Katherine Victor and Fred Hoffman. Name value star John Carradine was then drafted to narrate the entire mess. This version also played in theaters on a double bill with Warren's Terror of the Bloodhunters (1962). An un-tampered with version titled either Horror in the Midnight Sun or Terror in the Midnight Sun later showed up. The Something Weird DVD contains both versions for easy comparison. The original cut before Warren got his grubby mitts on it is clearly the one to go with. 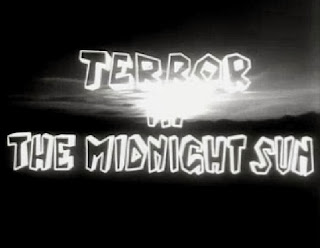 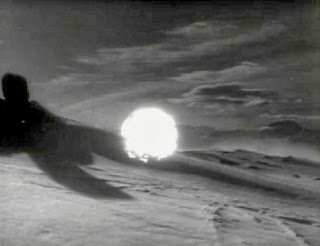 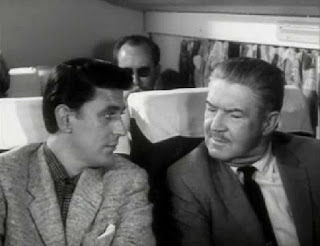 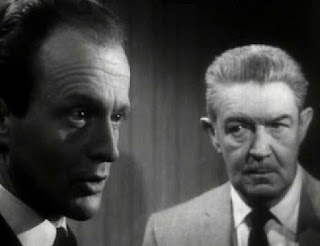 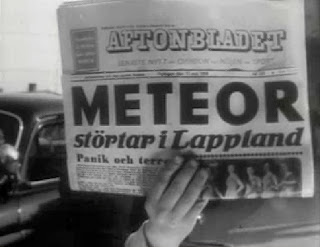 A large, round, glowing meteor-like object slides across the ground and crashes into a mountainside in the Midnight Sun Territory in Lappland above the Arctic Circle in Northern Sweden. Because natives reported that the unidentified object moved across the horizon for miles before finally deciding to fall, authorities begin to suspect that it wasn't really a meteor as reported, but some kind of spacecraft. American scientist Dr. Frederick Wilson (Robert Burton) shows up in Sweden to lead the investigation. He goes to the Royal Academy of Science, where Dr. Walter Ullman (Gösta Prüzelius) hooks him up with young playboy geologist Erik Engstrom (Sten Gester). Upon arriving in Lappland, Dr. Wilson and Erik meet up with military man Colonel Robert Bottiger (Bengt Blomgren), another scientist named Dr. Henrik (Åke Grönberg) and the rest of their expedition and they're off to survey the site by helicopter. Finding the still-smoldering object lodged in the snow, they decide to return the following day. Before that can happen, a bunch of slaughtered reindeer and giant footprints belonging to something "at least 20 feet tall" are found...  Is there a correlation between the fallen "meteor," the dead deer and the footprints? 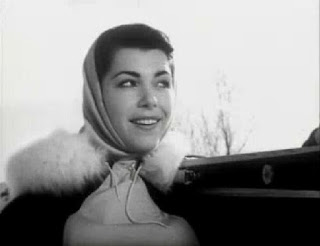 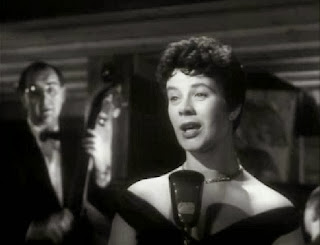 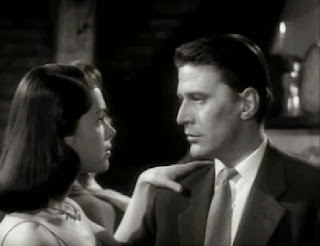 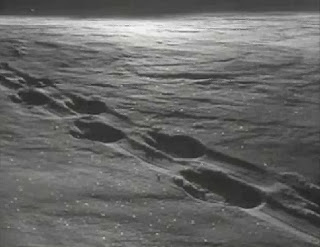 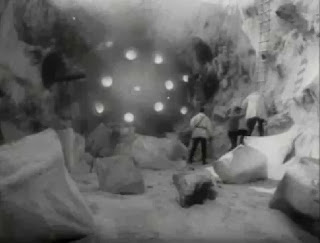 The men, plus Dr. Wilson's rebellious (and pretty annoying) Olympic figure skating / skiing star niece Diane (Wilson), who sneaks on board the helicopter, head out to the site. There, they discover what the meteor truly is (a spherical ship), but something really tall and powerful shows up destroy both their helicopter and their pilot. Stranded miles from anywhere, Diane and Erik - the best skiers in the group - head out toward the nearest village for help. While the other men wait, one falls prey to something else lurking inside the spacecraft. Diane injures her knee hitting a tree, but luckily she and Erik find a safety cabin, which turns out to not be so safe when a very tall, hairy monster shows up and causes an avalanche. It grabs Diane and takes her back to the ship where she also encounters a trio of cone-head aliens dressed in black, hooded robes. After the creature destroys a village, our heroes and the natives head out after it for the cliff-top finale. 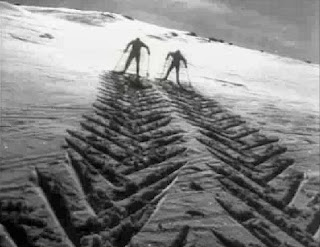 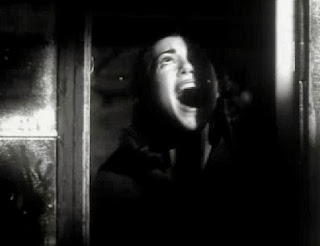 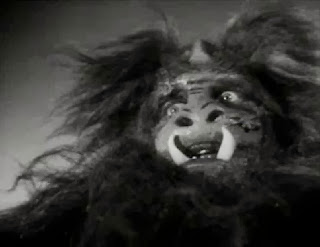 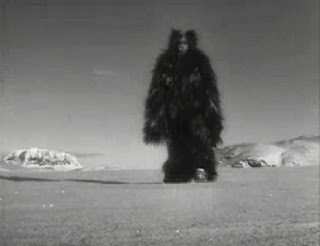 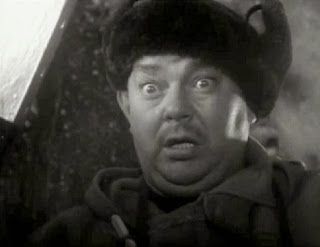 Far more enjoyable than usually given credit for, this hearkens back to several classic American monster movies of the past; most notably King Kong (a big hairy monster having an affinity for the pretty leading lady) and Frankenstein (the torch-carrying mob [though amusingly on skis] heading out after the creature). The sense of place and the desolate, snowy environment - vividly captured by very good on-location filming and nice aerial photography by Hilding Bladh - also helps to distinguish it. And like any good monster movie, naturally this needs a good monster to succeed. Thankfully, this film has one. The big, shaggy-haired, man-in-a-suit, Yeti-like creature has a flat pig-like snout and protruding tusks, is pretty expressive and charming, and gets several small scale sets to tear through at the end. It's saved for the last 20 minutes of this 71 minute film, but it's worth the wait and gets a lot of scenes once it finally does show up. Odert von Schoultz did an above average job on the special effects for the time. 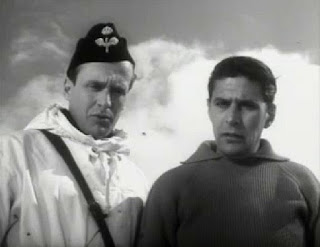 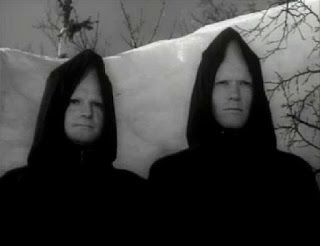 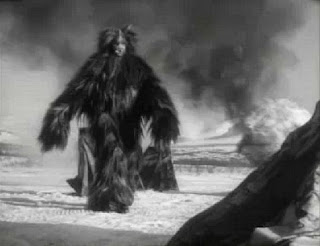 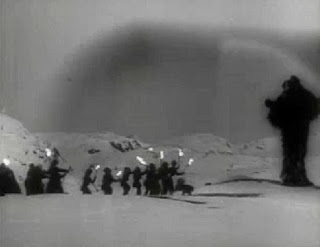 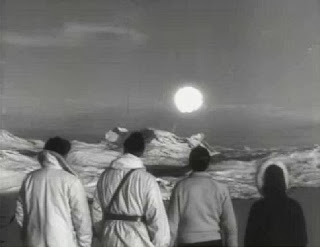 There's also a lot of well-photographed skiing footage (even sometimes utilizing skier POV camerawork), a musical number and even an amusing theme song ("Midnight Sun Lament"). Fans of 50s monster movies should definitely check this one out. In 1960, starlet Wilson sued the producers for 150,000 dollars for utilizing a body double to film a nude scene (seen from behind a sheer curtain) without informing her. Some prints have this brief scene, while others do not.

I remember a short confused version of this being shown on TV in the early '70's! The version you reviewed seems to make a little more sense...

Maybe you watched Warren's version. This original cut is much, MUCH better. Great setting and monster. The biggest debit is that the lead female character is an annoying twit!