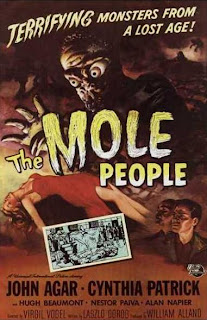 Directed by:
Virgil W. Vogel
During the five-minute prologue, Dr. Frank Baxter, a real-life Professor of English at University of South Carolina, tells us of the various theories about what's really going on in the middle of our Earth. Then the credits cleverly roll out of a steaming hole in the ground and our story begins. Somewhere in Asia (Tibet, I think), archeologists unearth a stone tablet and a child brings them an ancient oil lamp he claims he found near the base of the mountain. A five-man expedition; Dr. Roger Bentley (John Agar), Dr. Judd Bellamin (Hugh Beaumont), Prof. Etienne Lafarge (Nestor Paiva), Dr. Paul Stuart (Phil Chambers) and some other guy who might as well be wearing a red Star Trek uniform, is organized to climb the snowy mountain to look for more artifacts. After scaling for a couple of days and surviving several avalanches, they come across a Sumerian temple carved into the mountainside. The ground starts giving way, Paul falls inside a hole and the rest climb down hundreds of feet to try to locate him. Unfortunately, by the time they get to Paul he's dead and the nameless guy is crushed during a rockslide.
Roger, Jud and Lafarge stumble on underground, locate more artifacts, get pulled thought the dirt down to another level by clawed hands and come across an ancient civilization of light-hating, mushroom-eating albinos who want to sacrifice them to "The Divine Fire of Ishtar." The mole people, led by mole king Sharu (Arthur D. Gilmour) and high priest Elinu (Alan Napier), have enslaved clawed mutants called "The Beasts of the Dark" and force them to do their manual labor. The archeologists are spared their wrath for the time being when they brandish a flashlight, but know they need to try to get out of their pronto or else they'll be killed. Naturally, there's a hot, normal-looking mole woman named Adel (Cynthia Patrick) who strikes Agar's fancy. Can the scientists get out of there alive?
As a juvenile 'lost world' adventure, this Universal production works OK. Napier does a standout job in his role, some of the sets, mattes and makeups (from Bud Westmore) are decent enough and the general idea is pretty intriguing. However, if you have a low tolerance for absurdities, you'll probably want to give this a pass. Why an ancient Sumerian mole tribe would speak perfect English, dress like ancient Romans and have Egyptian hieroglyphics adorning their walls boggles the mind. Where their finely tailored and impeccable duds and herd of sheep come from may also give you a pause. The science is a bit silly, with characters behaving as if the 'great flood' is factual, and it's also saddled with a terrible ending. The mountain climbing scenes economize by stealing footage from the 1929 German film WHITE HELL FROM PITZ PALU.
Director Vogel also made the Swedish abominable snowman movie TERROR IN THE MIDNIGHT SUN (1959). The film got the usual ridicule from the MST3K folks in 1997. In 2008, Universal released it as part of the box set "The Classic Sci-Fi Ultimate Collection, Vols. 1 and 2."
★★
Posted by The Bloody Pit of Horror at 7:04 PM

It's ironic that they used footage from another movie as Jerry Warren used a few Mole People scenes in "The Wild World of Batwoman"!