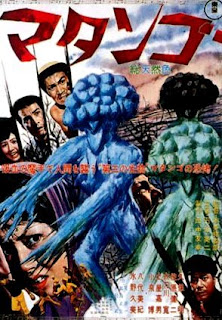 
Varied group of seven people; level-headed professor of psychology Kenji Murai (Akira Kubo), rich company president Masafumi Kasai (Yoshio Tsuchiya), opportunistic radio and television actress Mami Sekiguchi (Kumi Mizuno), famous mystery novelist Etsurô Yoshida (Hiroshi Tachikawa), skipper Naoyuki Sakuta (Hiroshi Koizumi), naive female college student Akiko Sôma (Miki Yashiro) and sailor Senzô Koyama (Kenji Sahara), hit the high seas on a sailboat for what they assume will be a pleasurable trip to Europe. Their wish for that promptly ends when rough seas break off the mast, shred the sail and threaten to sink the boat. The next day the heavily damaged boat is lost in the thick fog and drifting somewhere south. There's no way to call in for help because the CB radio shorted out the night before. They have enough battery power in a portable radio however to hear part of a news broadcast that lets them know the authorities are aware they're still out at sea. Days pass, food and water runs out, tensions start rising and some are even borderline delusional (one guy even sees a ghost ship), but the aimless drifting at sea is about to come to an end. An unpopulated, uncharted, tropical island comes into view.

Immediately upon making it to land, the famished and weakened survivors decide to head inland to see if they can find any kind of nourishment or any kind of help. Fresh water is quickly found and so are a few signs that the island may not actually be deserted. They eventually locate a huge wrecked research ship on the beach, which seems to have been there at least a year. No inhabitants are inside. Upon inspection, they realize that each of the rooms has a strange coating of fungus on it aside from areas containing any kind of chemical subtance. They find a rifle, that could be used to hunt with, and about a week's ration of canned food, which will tide them over until they get rescued. They also find a box labeled "Matango." Inside is a giant mushroom that seems to be native only to this particular island. A captain's log book indicates that men sent out into the jungle to gather edibles never returned and gives the shipwreck survivors ample warning that they better not consume any of the mushrooms that populate the island. Everyone decides to clean up the inside of the ship and stay there until they can either fix up their sailboat to satisfactory condition or they're rescued. If they're rescued.

Strangely, no animals seem to live on the island and, even stranger, birds passing through refuse to land there, so being able to hunt for meat isn't an option. There are a few turtle eggs around and they, along with some seaweed and some edible plant roots, provide a couple of options for food; just not in enough quantity to comfortably feed everyone. The grim situation manages to bring out the worst in most of the characters. Koyama tries to lay claim on the women. Wealthy scumbag Kasai sleeps and eats apart from everyone else, tries to steal and hide what little canned food they do have and doesn't think he has to lift a finger to help with anything. He also waves around his cash and is able to secretly buy extra food off the slimy Koyama. Sakuta ends up running off with all their food and the ship, stranding everyone else there. The arrogant Mami, who's been Kasai's mistress, reveals she was just using him to get to Europe, all the while she's been carrying on a not-so-secret affair with Yoshida. Speaking of Yoshida, he's the first to crack and go against the decision to not eat the mushrooms. He gorges himself on them and slowly starts going crazy, threatening to shoot everyone, until they're forced to lock him in a room.

The mushrooms that are in abundance on the island are a strange vegetation indeed. They come in all shapes, colors and sizes, they possess mind-altering / hallucinogenic properties, they're highly addictive and they're just like potato chips (or if you're like me - Cheez-It's): once you eat one, you just can't stop. A steady diet of the mushroom mutates whoever eats them, both mentally and physically. First, fungus slowly grows on the skin until the eater is transformed into a lumpy-face ghoul before a full-fledged transformation into giant mushroom.

Mushroom People? Sounds rather ridiculous, right? But this one actually works. Far from a piece of Grade Z schlock, it's a good, very atmospheric, serious, fairly compelling horror / survivalist picture about the dark side of human nature and the depths some people will go to save their own ass at the expense of others. The tale is told from a psychiatric hospital where the sole survivor of the ordeal explains what happened to doctors. Shot in Tohoscope, there's a very hazy / foggy sheen that creates a great amount of dreary atmosphere and the makeups and monster designs are effective. Matango was also influential in a rather unexpected way. A sailor, a skipper, a professor, a rich guy and a movie star all shipwrecked on an uncharted island waiting for rescue? Sounds an awful lot like a very popular 1960s TV sitcom to me. In fact, this movie was released the year prior to Gilligan's Island, so it's quite possible this is where the general idea came from.

Originally released in the U.S. under the title Attack of the Mushroom People, which certainly didn't help anyone take it seriously. It was also known as Curse of the Mushroom People and Fungus of Terror. In actuality, the full-grown mushroom monsters aren't even really seen until the very end of the film. The DVD from Tokyo Shock / Media Blasters contains some great extras, including a commentary from star Kubo, an interview with Teruyoshi Nakano, a spoken word segment with production stills, several language options (an English dub or the original Japanese language track with subs) and trailers.

I'm glad that someone else sees something deeper in Matango. I love this movie as a whole but the way it shows friends turning on one another is brilliant. Oh yeah and Nice catch on Gilligans Island.
That got past me somehow.

I think if the title had stayed 'Matango' instead of 'Attack of the Mushroom People' people'd probably take it more seriously.