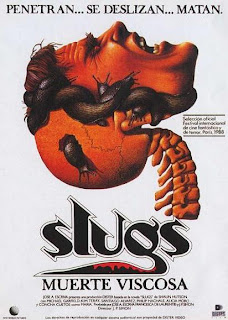 
The director of such notoriously awful flicks as the chainsaw slasher gore-fest PIECES (1982) and the MST3K favorite POD PEOPLE (1983) returns with what - in theory - sounds like another surefire stinker. With a plot-line centering around slightly larger-than-normal killer slugs one cannot get their hopes up too high, right? However, this is a surprisingly enjoyable and fun nature-runs-amuck tale that hits most of the right notes. It sounds like it should be pure schlock, and to an extent it is, but there's a big difference between badly-made, inept schlock and well-made, competent schlock. This, an adaptation of the Shaun Hutson novel, falls into the latter category. Not badly-made at all, this is nicely-photographed, has good special effects, a passable cast, a workable plot and characters and it thankfully takes its premise seriously without making a complete mockery of the proceedings, accidentally or otherwise. Yeah, so the dubbing is sometimes pretty awful (it uses both English and Spanish-speaking actors; dubbing the latter) and some of the dialogue is laughable, but perhaps the single silliest thing about this is that the original Spanish title Slugs: muerte viscosa ("Slugs: Death Slime") was changed in America to Slugs: The Movie: as opposed to Slugs:... the what? 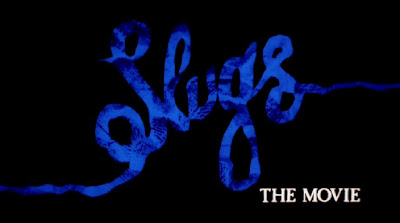 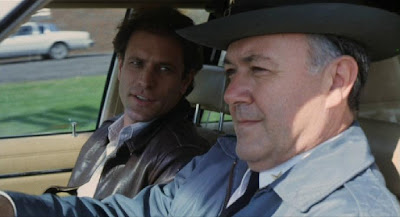 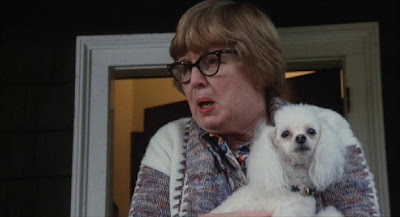 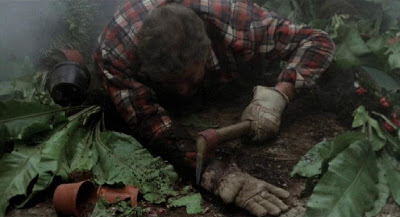 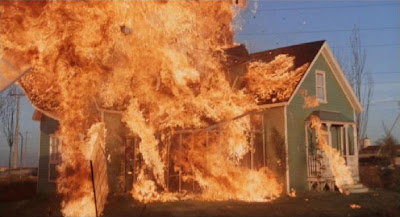 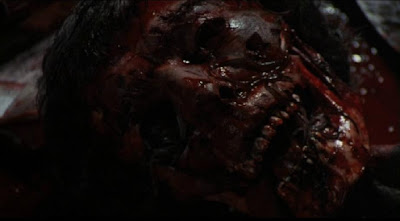 The small town of Ashton is an exciting place; so exciting that one woman refers to it as "the armpit of America." Luckily for her, things are soon about to change. We've already seen a young man fall into a lake and get turned into a pool of bubbling blood by something (*cough* slugs *cough*) in the water, as well as an old drunk getting gobbled up by something (*cough* slugs *cough*) while trying to pass out on his couch, so something is definitely up. To follow-up on eviction proceedings on the latter, the Sheriff and our everyman hero - health inspector Mike Brady (Michael Garfield) - go the home and find the wino's half-eaten, skeletal corpse. It's crawling with wiggly worms and is missing some important things such as the eyeballs, kidneys and liver. Upon further inspection, Mike discovers slime trails leading into the basement. And he's not buying the sheriff's theory that the guy had been killed by "raccoons driven out of the hills by the cold" (!!) Mike, as well as county sanitation supervisor Don Palmer (Philip Machale), are being driven crazy by a sudden influx of complaints about the sewer systems being backed up. 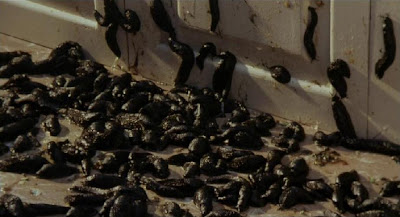 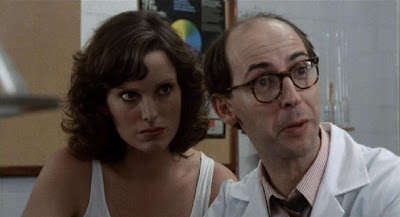 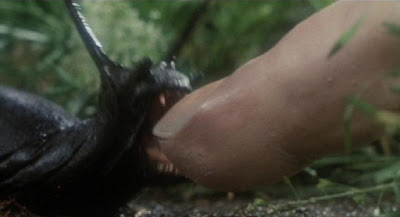 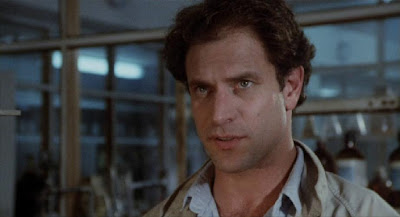 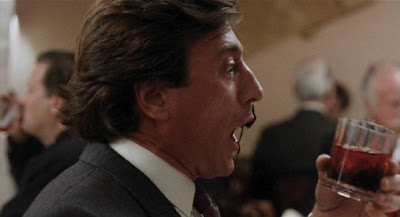 A henpecked old man gets a slug in his gardening glove and can't get it off so he chops off his own hand with a hatchet before blowing he and his wife up after accidentally knocking over some chemicals. At another home, Maureen (Alicia Moro), a housewife with a drinking problem, ends up accidentally serving her husband David (Emilio Linder) a slug salad. He has stomach cramps that evening and notes "The salad did taste a little salty" before heading off to bed. We'll get back to him later. Mike and his schoolteacher wife Kim (Kim Terry), who is nicknamed "The Wicked Bitch" by her classmates for being too strict, find some slightly enlarged slugs in their garden. After one actually bites his finger, they take a few to the school so scientist Dr. John Foley (Santiago Álvarez) can take a look at them and explain to us all thing slug. Did you know that because of its thick slime trail, a slug can slide across the edge of a razor blade without ever even touching the razor? Well now you do! After the scientist witnesses one of the slugs attacking a hamster, he starts to believe something is seriously wrong with Ashton's slug population. Don the sanitation man discovers that much of the town as built upon a (uh oh!) toxic waste dump and that construction of a new shopping center is responsible for stirring up the problem. 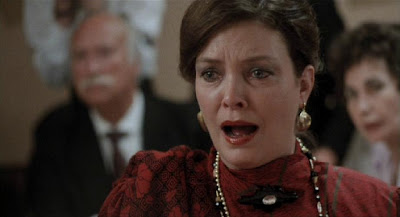 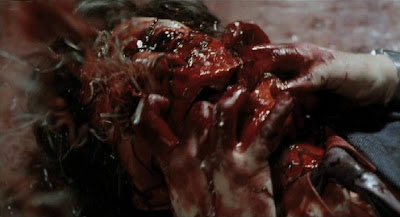 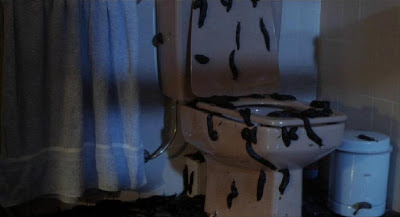 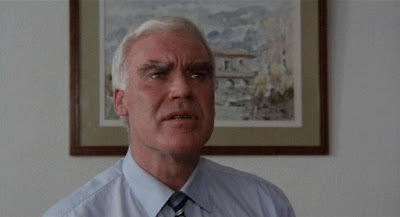 In between eating rats, chickens, puppies and kitties, the slugs sneak into a home and have a midnight snack consisting of two nekkid teenagers. They also eat a lettuce farmer and make his stomach explode and attack a guy on the toilet. And as far as David, the man who ate the salty salad the night before, is concerned. Well, he goes to a business dinner, blood starts pouring out of his nose and then his eyeball explodes in a bloody mass of worms. The slugs not only are equipped with venom that has paralytic abilities and can also infect people with a parasitic worm that quickly multiplies in the body. And since slugs are hermaphroditic, they can fertilize their own eggs. For the big fiery finale, the scientist concocts a batch of lithium, which combusts when it hits moisture. Mike and Don hit to the sewers to try to find the slug's breeding ground... and end up blowing up half the town in the process! 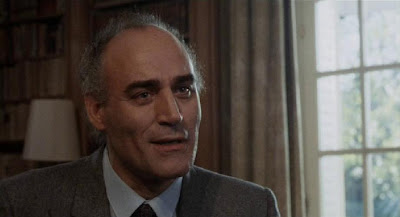 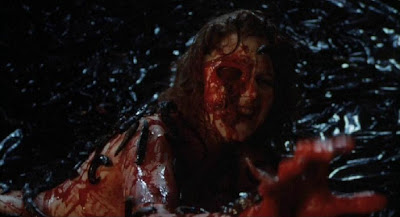 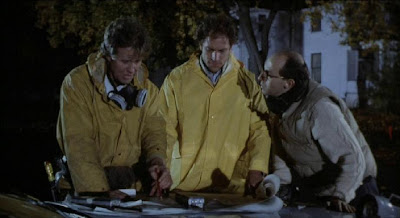 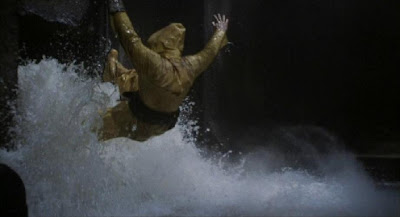 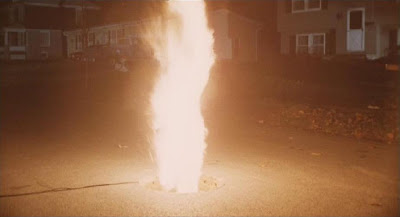 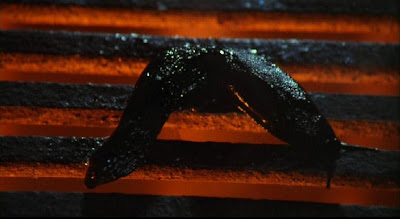 Oh how I love Slugs. Everything about it. The fact that the title sequence lets me know that it is Slugs "The Movie" and of course that beautiful exploding eyeball sequence. But why worms?

I only tag recurring themes or people. Since this one is the only killer slug movie in existence (at least as far as I know!), I didn't bother slug-tagging it. But it does have parasitic worms and a handful of other movies prominently feature worms. Hope that makes some sense!

Yeah I was not asking why you tagged Worms. I was sarcastically trying to say why would the film makers have worms exploding from a mans eyeballs. Especially since the movie is about slugs. If that scene was in Squirm it would make much more sense. Either way I love the exploding eye scene and the worms are okay by me.

Ah, OK. But yeah, it's funny how the worms turned out to be the best part of 'Slugs.' The director really should have followed this with a parasite worm movie instead of that bore Endless Descent.

The stand out gore scene for me was the hot nude chick who slips on the slime covered bedroom floor and dives in butt-naked into the mass of toothy slugs, did you notice this actress had a nice ass?!

Yeah, that was definitely one of the best scenes. And yes she did. I thought the blonde on the boat at the beginning should have had a larger role, as well.

Disgusting gore aside, the naked woman the slugs devoured had an awesome ass.