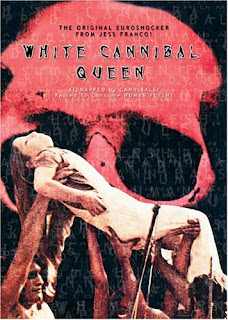 ...aka: Barbarian Goddess
...aka: Cannibal Horror 3
...aka: Cannibals
...aka: Inferno der kannibalen
...aka: White Cannibal Queen
Directed by:
Jesus Franco
.
Eek! Caucasian cannibals in bikini briefs and clown makeup! Professor Jeremy Taylor (Al Cliver, of ZOMBI 2 fame), a specialist in tropical diseases, his wife Elisabeth (Pamela Stanford), their young daughter Lana (Anouchka) and some other guy are enjoying a relaxing trip on their yacht when they're attacked by a cannibal tribe. Mom is immediately killed and eaten (these cannibals apparently don't bother cooking their meat), the other guy is speared in the back and the good professor is clubbed unconscious, dragged back to the cannibal village and has his arm chopped off, but manages to escape into the jungle, is found by some hunters and rushed off to a hospital. As for little Lana, she's also located by the tribe and brought back to the village. Instead of eating her, they decide to start worshiping her. Why? I'm not really sure, but I'm presuming it's because of the luxurious bleach blonde hair the brown-haired child miraculously manages to sprout later on in the film.
.
Many years after the attack, Jeremy finally recovers from a long bout of temporary amnesia with help from his loyal nurse Ana (Lina Romay) and decides to organize a safari into the jungle to try to locate his now-grown daughter (Sabrina Siani). They, along with wealthy skeptic Charles Fenton (Olivier Mathot), pampered Barbara Shelton (Shirley Knight) and half a dozen other nondescript men and women, then venture into the jungle and end up getting picked off one by one. Though most of the dreadfully dubbed cast are done away with by poison arrow or spear, there are three cannibalism scenes - all of them involving topless women and all of them going on for what seems like an eternity... in slow motion... with the same shots of cannibals pulling out and chewing on organs and the same sounds of moans and slurping noises being repeated over and over again...
.
Trying to come up with a list of all the areas where this fails would far exceed the word limit allowed here, but where it's most inadequate is in the believability department. Some of the best cannibal movies work because they were actually filmed in tropical locales and managed to establish a sense of complete isolation far removed from "civilized" man. Here, the "jungle" looks like some kind of country club where the native vegetation and surroundings are just all wrong. It's hard to believe a cannibal tribe could thrive when there are modern houses with paved sidewalks a hop, skip and a jump away. During one hilarious scene, a couple of cannibals are even seen running down what appears to be a paved road! Speaking of the cannibals, they aren't the least bit believable either. Most are white/European and Spanish actors that have their faces painted in unnaturally bright blue, red and yellow clown colors. The shyer members of the tribe have also somehow managed to acquire some bikini briefs to wear under their loincloths. Siani gets her own specially made thong loincloth, though. I guess they felt she was special since she's just one of two women shown to be in the tribe.
.
As far as cannibal movies go, this one sits at the very bottom of the list next to DEVIL HUNTER (1980; another Franco bomb) and CANNIBAL TERROR (1981). All three came from a hack production company called Eurociné, who were also responsible for two of the worst zombie movies ever made; OASIS OF THE ZOMBIES (1981; again by Franco... see a pattern here?) and ZOMBIE LAKE (1980).
.
★
Posted by The Bloody Pit of Horror at 3:42 PM

I heard of most of the movies you mentioned in this review but I didn't know about the movie itself!

This one's not hard to find. It's on DVD on two different labels; Televista (titled "White Cannibal Queen" and the box pictured) and Blue Underground (as the creatively title "Cannibals," lol).

What makes it really confusing is that IMDb lists yet another movie titled "I Cannibali" in their database. It is supposedly from 1979, features most of the same actors and is said to be directed by Franco Prosperi. The opening credits of White Cannibal Queen say "A Franco Prosperi film" before the title and then at the end of the credits says "Directed by Jess Franco." Weird. Maybe they both had a hand in directing it?