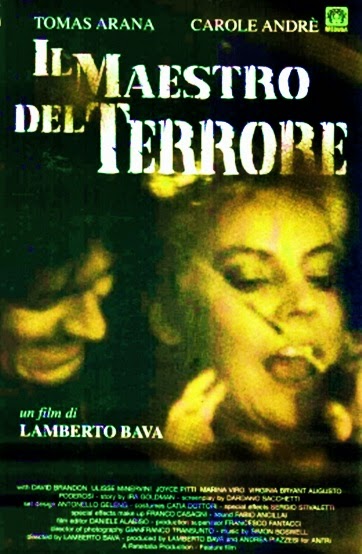 
One of the rarest of Lamberto Bava’s 80s horrors, this – sort of a home invasion thriller with a supernatural twist - has never been officially released anywhere to my knowledge; not even in Italy. Bootleg copies exist though, and the one I obtained had a “Not For Commercial Use” warning at the bottom of the screen the entire time. It’s silly, farfetched and confusing, but entertaining and surprisingly well made. The “Prince of Terror” is the name the media has given to famous Romanian horror movie director Vincent Omen (Tomas Arana). Omen is having problems on the set of his latest zombie movie and decices, along with the film’s producer Philip Moses (Pascal Druant), to fire scriptwriter Paul Hillary (David Brandon), whom he claims is a plagiarist (“It’s a tribute, not a ripoff!”). While being interviewed, Omen tells a reporter (Virginia Bryant) “I am the devil” and plays with golf ball with “666” on it. Hints are also made that he may be ageless, or not quite human. Though he may be more than he seems, Vincent lives a relatively normal life in an ultra-modern gated mansion (complete with horror movie props) with his wife Betty (Carole Andre), their teenage daughter Susan (Joyce Pitti) and their pet pooch Demon (!)

After hosting a dinner for Philip and an airhead actress named Magda (Marina Viro), strange and horrifying things begin happening. The toilet overflows with blood and pages of Paul’s script are found stuffed inside. In an unintentionally hilarious scene, the daughter goes to pick up her dog and removes only the skin. After the dog is placed in a garbage can outside, someone heaves it back through a window. The power goes out and before long, a bald maniac breaks into the home and starts terrorizing everyone. The killer turns out to be Eddie Felson (Ulisse Minervini), a former actor burned on a movie set over a decade earlier who blames Omen for ruining his career. He may or may not be acting alone. And there’s more to the story than just that. The film also makes room for bear trap and chainsaw usage, a hand getting impaled with a shard of glass, a Poe moment of someone getting bricked up behind a wall, a decapitation, a robot (!) and a killer golf ball (!!) that explodes an eyeball on contact!

Many of the leads seem to be speaking English and the acting is actually pretty good aside from the daughter, who looks older than her mother yet irritatingly acts like a whiny 7-year-old. There’s plenty of gore (by Sergio Stivaletti), the screenplay (from the prolific Dardano Sacchetti) offers up some genuine surprises along the way, the home it’s set in looks great and Gianfranco Transunto’s cinematography and Simon Boswell’s score are both fine. If only the whole thing weren’t so silly and it wasn’t saddled with such an annoyingly inconclusive ending… Oh well, Lamberto’s done much worse than this.

I'm gonna have dig up a copy of this!

wanted the sustained full-tilt stupidity of bava's earlier GRAVEYARD DISTURBANCE, but i won't complain: the "indoor-golf with satan" finale was... jaw-dropping.