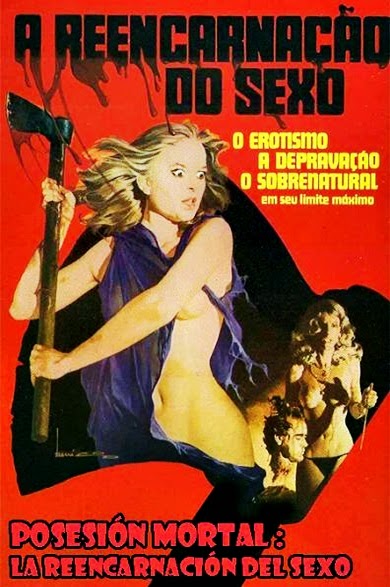 ... aka: Mortal Possession: The Reincarnation of Sex

... aka: Posesión Mortal: La reencarnación del sexo
... aka: Reincarnation of Sex, The


According to the Coffin Joe bio "Maldito," written by Andre Marcinski and Ivan Finolli, the Brazilian film industry was on its last legs by the time the 1980s rolled around. The only way the industry could keep going was to shift its attentions away from mainstream films and focus its attentions on X-rated adult features. In fact, of the 679 films produced in the country during the decade, 425 were actually hardcore porno. While Reincarnation seems to be among the non-hardcore Brazilian films of the time (unless I saw a censored version that excludes close-ups) it's still loaded to the gills with sex, sex and, you guessed it, even more sex. The scenes are technically soft and about as graphic as what you might find late at night on Cinemax, except for one scene involving a sex toy (I'll be getting to that later...) and some full frontal male nudity (which is still pretty taboo on U.S. cable channels for some strange reason).

At a secluded farmhouse, teen Patricia (Patricia Scalvi) and a farmhand named Antonio (Artur Rovedeer) have loud sex, which seems to really piss off the girl’s father (Roque Rodrigues). The next day, dad lures the lover out into the woods, chops him up with an axe and then buries the body. The lover’s vengeful spirit then calls out to the girl at night, leading her to his body. She's possessed, goes bonkers and starts rubbing blood all over her body. The film then cuts to “Dez Anos Depois” as another young couple – Celia (Celia Santos) and Fabio (Fabio Vilalonga) – purchase the same home and move in. Celia hears the lover's voice, becomes possessed and turns into a nympho who’s always running around the house naked and demanding rough sex. She also has visions of Patricia floating outside her window a la the vampire kid in Salem's Lot. While most men might be in heaven, Fabio becomes concerned that his wife isn't quite herself and contacts his friend Roberto (Roberto Miranda) for help. Before Roberto gets there, Celia manages to get her hubby into bed and stabs him to death during sex. But you think that's gonna stop her? Ha! She just keeps on going on top of Fabio's corpse and then decapitates him when she's done! Sharon Stone, eat your heart out.

All in all, adequate sleaze.