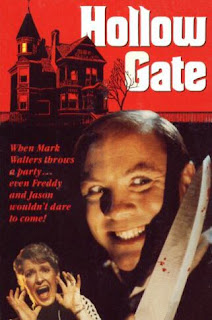 Directed by:
Ray Di Zazzo
An alcoholic tries to drown his young son after he fails at the bobbing-for-apple game (!) at a Halloween party. Ten years later, the now grown boy – Mark (Addison Randall) – is a mentally disturbed guy who seems to go bonkers every year when All Hallow’s Ever rolls around. He blows up an obnoxious guy and his date in their car (by putting her panties in the gas tank and lighting them right before they drive off!) and then two years later attacks a girl who won’t go on a date with him. He’s placed in an institution briefly before being released into the care of his wealthy widowed grandmother, Mrs. Nelson (Pat Shalsant), who owns a large country estate called Hollowgate. Granny keeps him insolated in a secure room but makes the mistake of letting him out on Halloween when he hasn’t taken his medication. He murders her with a pair of scissors and then sets about stalking and killing four teenagers; Kim (Katrina Alexy), Allen (Richard Dry), Mandy (Patricia Jacques) and Billy (J.J. Miller), who he traps on his grounds with an electric fence that surrounds the property. Mark dons different costumes and personas (soldier, hunter, doctor, etc.) and kills with axe, shotgun, combine harvester and a pair of killer Golden Retrievers (!?) while overacting and spouting off various silly one-liners.
.
Goofy, cheap, highly dumb cheese? Absolutely. But in comparison to other shot-on-video titles of the 80s, it's surprisingly fun and watchable, with decent cinematography, settings and an enthusiastic cast. Randall plays the killer for high camp, and the rest of the cast are adequate. The victims are all amusingly sensitive, touchy-feely and overly emotional. Producers Joseph Merhi and Richard Pepin also made the horror EPITAPH, before finding their niche in the direct-to-video action market.
★★
Posted by The Bloody Pit of Horror at 4:45 PM

Glad you're back! These reviews made my day! I might actually see one or two of them one day!

Thanks! I was getting a little burnt out so a break was in order!