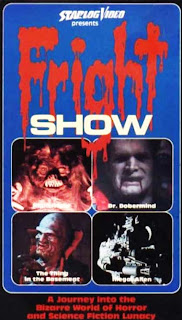 In an attempt to cash in on the 80s/90s video boom era, several genre magazines branched out to give us horror releases on their very own video labels. Of course, there's Fangoria Films, who'd produce three rather unsuccessful original films themselves in the early 90s, starting with the vampire movie CHILDREN OF THE NIGHT (1991), before deciding they'd be better off just releasing other people's movies. Before them, the sci-fi rag Starlog tried their hand with this release and the documentary FANGORIA'S WEEKEND OF HORRORS (1986). Judging by the fact those were their only two releases, I'd say their video distribution division didn't fair too well. FRIGHT SHOW (aka CINEMAGIC) is comprised of four independent short subjects; three of which were done by people who surprisingly went on to have pretty successful careers. The combined run time of the four shorts falls well short of an hour, so unfortunately Starlog decided to pad this tape out with worthless "comic" linking segments directed by Damon Santostefano and hosted by a pair of unfunny dimwits, played by Chris Phillips and stand-up comdian Eddie Brill, who basically sit around making lame jokes, making shadow puppets on the walls and eating stale popcorn. Santostefano would go on to work for Fangoria himself, making two SCREAM GREAT documentaries and one of their ill-fated original productions (1992's SEVERED TIES), before switching to more wholesome stuff like the TV series The Adventures of Pete & Peter, and such teen-oriented drivel as BRING IT ON AGAIN (2004) and ANOTHER CINDERELLA STORY (2008).
The first story "Dr. Dobermind," is about a young girl who meets deranged, gap-toothed taxidermist Dr. Dobermind while on a school tour of a natural history museum. She's then haunted by visions of Dobermind, who squashes her ice cream cone at Häagen-Dazs and materializes in ghoulish ways in her home later that night. Directed by Jonathan Mostow, who'd go on to make the very good thriller BREAKDOWN (1997), U-571 (2000) and the upcoming Bruce Willis film DUPLICATES (2009). The cinematographer was Peter Rader, who'd go on to direct GRANDMA'S HOUSE (1989) and the 1995 made-for-TV remake of RETURN TO WITCH MOUNTAIN. Next up is Jeffrey Baker's "Illegal Alien," which is easily the best segment. It's a surprisingly successful parody of ALIEN, which squeezes in a high number of amusing and knowing gags in a short time before ending rather abruptly. The third tale is "Night Fright," a kind-of-cute short about a horror movie loving little kid who discovers there's a literal monster in his closet. Directed by Frank Kerr, who has made several low-budget films over the years, included the recent horror effort JACK IN THE BOX (2008). Finally, the comic "Thing In the Basement" involves a bald-domed alien with laser beam eyes that crash landing near the home of three poker-playing yahoos. The make-up is by John Carl Buechler, who also appears in this segment.
Overall, there ain't much to really get excited about here. Four homemade shorts; one of which is pretty good and the other three just so-so; with awful linking segments you'll probably just want to fast-forward through.
★★
Posted by The Bloody Pit of Horror at 9:07 AM