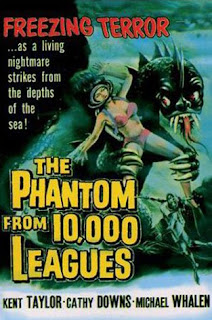 Lots of monster movies understandably used their creature sfx as "money shots" for later in the film. They'll get either a "Hey, that's kinda cool..." or a "I waited around just to see that?!" type of response, but at least the anticipation of seeing what the monster actually looks like builds up some intrigue over the course of the film and helps viewers make it through the obligatory talky passages, which are usually centered around scientific discussions that are - more often than not - basically just jibbberish. Here, the filmmakers make the major mistake of unleashing their awkward-looking man-in-a-suit papier-mâché sea menace in the opening scene as it kills a fisherman after tipping over his rowboat. And after you see it doing its thing at such an early stage in the film, and see what a silly-looking beast it is, you might not even bother sitting through the rest of the film. And I can't say I'd blame anyone for wanting to bail out early. Or never taking the plunge at all. This one's pretty dull overall. It's woodenly-acted, slow-moving and nothing surprising or interesting ever happens. It's also a little longer than usual for a 50s B sci-fi/horror flick, clocking in at around 80 minutes.
Dead bodies charred with radiation burns are being found lying around the beach at Baker's Cove, California. Our government sends out two operatives; oceanographer Dr. Ted Stevens (Kent Taylor) and federal agent William S. Grant (Rodney Bell) to investigate. Meanwhile, Prof. King (Michael Whalen), who teaches at "The Pacific College of Oceanography," has discovered a giant, glowing uranium deposit/rock underwater and decides to see what kind of effect it may have on ocean life, which results in... Well, we already know since we saw "it" in the opening sequence. Cathy Downs co-stars as the professor's daughter Lois, who's basically around to show some 50s-style skin in a bathing suit and silhouette shower scene, plus take part in a dull, cliche romance with Ted. Other characters include George Thomas (Phillip Pine), the professor's murderous and treasonous assistant, who's in cohorts with a sexy blonde foreign spy named Wanda (Helene Stanton), and Ethel Hall (Vivi Janiss), the professor's secretary, who ends up getting shot in the back with a spear gun for being too nosy.
.
The fact the monster is usually spotted clear as day from various rowboats and is always seen bobbing around in shallow water near the shore (the same location of the atomic rock), the title makes absolutely no sense. Apparently 1 league is equal to 3 miles, which would imply that the creature comes from 30,000 miles (!) under the surface! Maybe they should have called it The Phantom from 100 Inches instead. The title actually was most likely an attempt to cash in on Disney's bit hit 20,000 LEAGUES UNDER THE SEA, released the previous year.
.
The Russian-born director (who is best known as an editor) also made FROM HELL IT CAME (1957). Screenwriter Lou Rusoff would go on to write films for Roger Corman, including DAY THE WORLD ENDED (1955) and IT CONQUERED THE WORLD (1956), and composer Ronald Stein would also go on to work for Corman. It was "presented by" Samuel Z. Arkoff and James H. Nicholson.
★1/2
Posted by The Bloody Pit of Horror at 4:49 AM