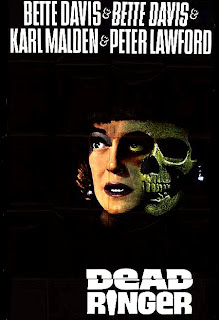 In my estimation, this isn't really a horror film (it's more of a suspenseful drama), but since it's a title included in several of my horror reference books, I'm including it here. It's also often listed as an entry in that subgenre of terror films spurned by the success of WHAT EVER HAPPENED TO BABY JANE? (1962); which cast "over the hill" or "washed up" former female film stars in lead roles as killers of varying degrees of psychosis. I've seen this cycle of films referred to under many titles, including "Gothic moderne," "Hag Horror" or "Grand-Dame Guignol." Whatever the name, the common link are the female leads, each of whom enjoyed a career revival of sorts through these films. The subgenre as a whole is an extremely enjoyable one primarily because of these veteran actresses, who brought a stamp of professionalism, class and often overwrought, but always sincere, campy humor to some otherwise seedy films, as well as those intangibles that only come from experience. In DEAD RINGER, we get a double dose of Bette Davis, playing identical twin sisters... neither of whom is really all that right in the head.
Edith (Davis) was in love with a successful and very wealthy businessman, who ended up leaving her after succumbing to the charms of her identical twin sister Margaret (Davis again), who he'd apparently knocked up after an affair and thus felt obligated to marry. That was eighteen years earlier, but Edith has never forgiven her sister for it. In fact, she hasn't even seen or spoken to her since the incident. The man both women fought over has recently died of a heart attack and the sisters are reunited at the funeral. Margaret invites Edith back to her sprawling mansion home, bad memories come to the surface and Edith leaves enraged. After finding out through Margaret's chauffeur Henry (Cyril Delevanti) that her sister really never was pregnant and then learning she's about to lose her nightclub to a debt, Edith decides to get revenge. She lures Margaret to her home, shoots her in the head and then tries to take on her sister's appearance and demeanor and swap places with her. Margaret is now Edith - who'd just committed suicide, while Edith gets to walk in Margaret's shoes and live a lavish and worry-free lifestyle with plenty of money at her disposal. At first, things seem to be working without a hitch, but one man in each ladies life - Edith's dedicated detective boyfriend Jim Hobbson (Karl Malden) and Margaret's sleazy, materialistic playboy lover Tony Collins (Peter Lawford) - threaten to uncover what's really going on.
Based on the story "Dead Pigeon" by Rian James, the script for this one (written by Albert Beich and Oscar Millard) was actually penned way back in 1944 and had been sitting around collecting dust at Warner Brothers for around 20 years before finally being filmed. And it's definitely a good thing they finally did produce this one because it's a worthy suspense-drama with excellent acting, nicely-drawn characters and several last reel twists that really throw you for a loop. The score (by André Previn) and b/w cinematography (by Ernest Haller) are both excellent, and the mansion interiors were filmed at the amazingly ornate Greystone Park & Mansion in Beverly Hills. Davis (who also got to play twin sisters in 1946's A STOLEN LIFE) is great, as usual, and the supporting performances are all fine, with Malden and Delevanti adding especially nice touches to the film via their supporting roles. The cast also includes Philip Carey as a police sergeant, Jean Hagen (in her final role) as one of Margaret's uppity friends, George Macready, Estelle Winwood, Bert Remsen as a bartender and Monika Henreid (the director's daughter) as a maid.
.
I'd like to dedicate this review to Mr. Malden, who'd just passed away a few weeks ago after a long and distinguished career. An Emmy and Oscar-winning actor best known for his performances in A STREETCAR NAMED DESIRE (1952) and ON THE WATERFRONT (1954), as well as his role as Detective Mike Stone on TV's The Streets of San Francisco (1972-1977), Malden also lent his talents to the genre films PHANTOM OF THE RUE MORGUE (1954) and CAT O' NINE TAILS (1971).
.
★★★
Posted by The Bloody Pit of Horror at 3:40 AM