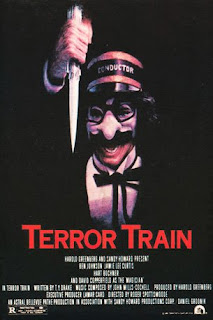 ...aka: Monstre du train, Le
...aka: Train of Terror
Directed by:
Roger Spottiswoode
A bunch of nice, popular frat guys trick the horny college nerd (Derek McKinnon) into a bed with a topless (and armless) female corpse, from which the poor guy emerges in psychological shambles. After spending time in an institution, he secretly boards a train hosting a masquerade party for the graduating seniors, starts killing those responsible for his earlier traumatic experience and dons the costumes of each successive victim. One of the more popular slasher movies of the era, this (like all of Jamie Lee Curtis' early horror films other than HALLOWEEN) is actually pretty bland for the duration of its running time. The cast is OK (Ben Johnson is especially likable here as the train conductor), John Alcott's photography is stylish, David Copperfield's magic act is pretty fun to watch and there's an effective surprise ending to make it all tolerable. With Hart Bochner (APARTMENT ZERO), Sandee Currie (CURTAINS), former model and Prince protege "D.D. Winter"/Vanity (now working as an evangelist) and Joy Boushel.
★★
Posted by The Bloody Pit of Horror at 11:39 PM