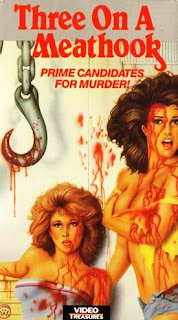 ...aka: 3 on a Meathook!
Directed by:
William Girdler
Four young women on vacation break down along a country road in the middle of the night and are picked up by awkward Billy Townsend (James Pickett), who lets them come back to the secluded farm he shares with his controlling, widowed father. Pa (Charles Kissinger) doesn't exactly welcome the guests with open arms, but reluctantly caves in to his son's wishes if he agrees to take them into town in the morning. As the women are ready to turn in for the night, they're all attacked and brutally killed by an unseen assailant. One's stabbed to death while taking a bath, two are blasted with a shotgun and the fourth is decapitated with a hatchet (a brief, but grisly, effect). The next morning, poor, lonely Billy doesn't remember a thing but Pa insists he attacked and killed the women. Billy runs off to town to drown his sorrows in a nightclub and runs across a bitter barmaid named Sherry (Sherry Steiner). The two immediately hit it off, Billy invites her back to the farm and she decides to go spend a day or two there with her friend Becky (Madelyn Buzzard). Will history repeat itself, or will Billy's newfound love save the day? And what gives with all the mention of delicious, yet strange-tasting meat, that Pa serves everyone?
.
Like DERANGED (1972; released in 1974) and THE TEXAS CHAINSAW MASSACRE (1974), this was loosely based on serial killer Ed Gein, and while it's not nearly as good as either of those other two films, it's not completely without its own special charm. The film is actually one of the first of its kind in the backwoods psycho genre, which would become popularized with the huge success of Chainsaw two years later and then revitalized a second time three decades after that with the release of the Chainsaw remake. After the first twenty or so minutes, the film settles down into a slower-paced, low-key psychodrama detailing Billy's attempts to live his own life away from his father. It's all pretty predictable, but Girdler at least throws us a curve ball at the very end, and even adds a little exposition. During the nightclub scenes, the action stops for two songs performed by a little known group called American Xpress. Thankfully, both songs are great. The acting is highly variable, though Pickett gives a fairly good performance.
.
Linda Thompson, who plays the bathtub victim and is the one to provide most of the nudity, had been crowned Miss Tennessee in 1972 and was the girlfriend of Elvis Presley from 1972 to 1976. Their relationship was the subject of the TV movie ELVIS AND THE BEAUTY QUEEN (1981) starring Don Johnson and Stephanie Zimbalist. Thompson was also married to Olympic decathlete Bruce Jenner for several years and is the mother of obnoxious reality TV "star" Brody Jenner. Linda and Bruce divorced after a couple of years and she eventually met and married composer David Foster. The two went on to write hits for such artists as Whitney Houston ("I Have Nothing;" which earned the couple an Oscar nomination), Josh Groban and others.
.
Mr. Girdler would go on to become an independent success story during the 70s, later making the highly profitable genre films GRIZZLY (1976; a JAWS cash-in that ended up becoming one of the highest grossing films of its year), DAY OF THE ANIMALS (1976) and THE MANITOU (1977) before tragically dying in a helicopter accident in 1978.
★★
Posted by The Bloody Pit of Horror at 11:41 PM