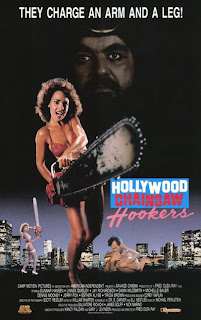 ...aka: Hollywood Hookers
Directed by:
Fred Olen Ray
Cheerfully cheap, infamously-titled B horror/comedy (filmed in just five and a half days) hits most of the right notes if you like this kind of stuff. Sleazy, wisecracking private eye Jack Chandler (Jay Richardson, who also narrates) is hired to locate runaway Samantha (Linnea Quigley) by her mother. While hanging out with some cops investigating a rash of mysterious dismemberment murders, Jack swipes a matchbook with the name of a hooker, Mercedes, written on it, as well as her phone number. He calls, arranges to meet her (Michelle "McLellan"/ Bauer) at a local bar, shows up and is immediately drugged. When he comes to, he finds himself knee deep in a cult of chainsaw-worshipping prostitutes who seduce and then chainsaw hapless saps to pieces to please the ancient Egyptian God Anubis. The cult is presided over by "The Master" (TEXAS CHAINSAW MASSACRE's "Leatherface" himself, Gunnar Hansen) and Jack learns that Sam has infilatrated the group to get revenge on the death of her friend.
.
HCH is every bit as silly and aggressively campy as one might expect from the title and delivers precisely what is expected of it. It's loaded with nudity and there are plenty of amusing scenes featuring cartoonish amounts of blood and rubber body parts flying all over the place when the hookers cut their clientel down to size. Aside from the horror content, the film also effectively takes aim at noir and TV detective shows with Richardson's dry, almost nonstop and often very funny narration track (conceived with a playear for wordplay and puns by the director and T.L. Lankford).
.
No one's expecting top flight acting from one of these things, they're expecting good-natured, enthusiastic camping, and that's precisely what most of the cast deliver. Richardson does a fine job in the lead role (one of his firt), though the character he's playing is so unlikable and sleazy it's tough to really take to him. Quigley - introduced at a later junction in the film - and Bauer both look like they're having a blast playing their respective parts. Better yet, both ladies get their very own memorable dance sequence. Quigley's - "Virgin Dance of the Double Chainsaws" - has her emerging from a sarcophagus clad only in a thong and some body paint with two mini- chainsaws in hand. Bauer's - the best scene in the entire film - has her stripping, dancing to some imitation Elvis and prepping her room (covering her painting of The King in plastic and putting on a shower cap!) before making a mess of her trick (Jimmy Williams). Dawn Wildsmith (as a chainsaw hooker in custody during the opening scene) and "Jerry Fox" / Fox Harris (as a customer who wants to make a topless little league calendar) have memorably amusing smaller roles. The only real disappointment is with Hansen, who seems like he's not even trying. Also with "Dukey Flyswatter"/ Michael D. Sonye as a bartender, Dennis Mooney as a cop and Gary J. Levinson.
.
It was selected as the #4 coolest B-movie by Maxim Magazine not long ago and is one of the director's best films. Ray's company Retromedia released a 20th Anniversary Edition in 2008 which includes a commentary track from Ray and Lankford and a "making of" featurette with Ray, Quigley and Bauer.
★★★
Posted by The Bloody Pit of Horror at 2:01 AM