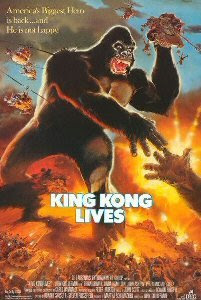 
Director Guillerman, executive producer Dino De Laurentiis and special effects man Carlo Rambaldi, the team behind the lame 1976 KING KONG remake, didn't leave well enough alone and returned with this belated sequel. It was critically panned (deservedly so) and was a flop, failing to match even half its budget in theaters. Linda Hamilton (is this the best she was offered after THE TERMINATOR?) and Brian Kerwin play scientists who give the giant simian an artificial heart after his disastrous fall off the World Trade Center. Then they decide to mate King with the amply-chested Lady Kong, who is of equal size and demeanor, resulting in the super-cute Baby Kong. The government wants to destroy them all. I would rather have the Divine role in a PINK FLAMINGOS remake than watch this moronic piece of trash again. From the failed DEG. Contains flashback footage from the '76 film.