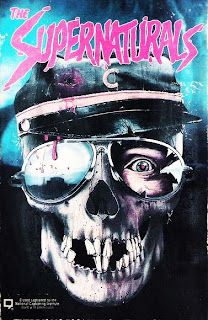 Directed by:
Armand Mastroianni
The tiny subgenre of "zombie soldier" flicks includes the fairly good SHOCK WAVES (1975), the notoriously awful French film ZOMBIE LAKE (1980), the equally bad Spanish effort OASIS OF THE ZOMBIES (1981) and a couple of others. Here's another to throw on that pile. It's American and involves confederate Civil War zombies. Just because the costumes are different that doesn't make this any better than others of it's ilk. In fact, it pretty much blows. "Yankees" make some confederate POWs walk through a field of land mines. Everyone dies but a little kid who turns around and clinches his fist, which then glows. Many years later, some young military recruits show up at a training camp and the vengeful ghouls kill them off. Star Trek fans might enjoy seeing Nichelle Nichols (Sgt. Uhura) in a rare lead role as the tough drill sergeant and the zombie make-up in decent, but the photography is terrible, the movie is too dark, nothing of much interest really happens and the whole thing is dull.
.
The cast includes British schlock/horror movie hunk Maxwell Caulfield, Talia Balsam (Martin's daughter, who also starred in CRAWLSPACE), LeVar Burton (Reading Rainbow), Bobby Di Cicco and Scott Jacoby. The director also made the wedding slasher HE KNOWS YOU'RE ALONE (1981) and writer/producer Joel Soisson went on to make direct-to-video sequels to MANIAC COP, THE PROPHECY and PULSE.
★1/2
Posted by The Bloody Pit of Horror at 9:27 PM