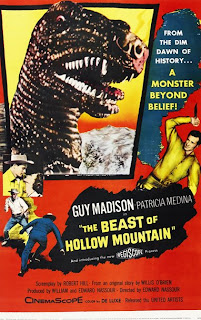 ...aka: Bestia de la montaña, La
...aka: Monstruo de la Montaña Hueca, El
...aka: Valley of the Mists
Directed by:
Edward Nassour
Ismael Rodríguez
Other than being your standard issue monster movie, this introduced the new process "Nassour Regiscope," which promised "animation in depth" to cinemagoers. In layman's terms, they used two different types of stop-motion animation; one employing a single model that is moved frame-by-frame, the other using a bunch of different models with slight differences which are replaced frame-by-frame to achieve the effect of movement. The film was also the first film to combine stop-motion effects with anamorphic widescreen and color (Cinemascope).
.
Mexican legend has it that a creature dwells inside accursed "Hollow Mountain" and any time there's a drought people and animals have a tendency to mysteriously disappear. An American cowboy, Jimmy Ryan (Guy Madison), along with his trusty partner Felipe Sanchez (Carlos Rivas), run the profitable Rancho Bonito cattle ranch near the mountain. Jimmy's fair cattle prices have managed to anger some people in the area, including hot-tempered competitor Enrique Rios (Eduardo Noriega), who effectively scares off all of Jimmy's ranch hands with stories of the fabbled mountain monster. Thankfully, little motherless Panchito (Mario Navarro) and his pleasant, but ne'er do well father Pancho (Pascual García Peña), who spends too much time at the local cantina, show up one day to work there; feeling indebted to Jimmy because he saved Pancho after his horse started to drag him. Busty señorita Sarita (Patricia Medina), who has tried to be a mother figure to Panchito since his mother passed away, swings by to check up on the kid and strikes Jimmy's fancy (and vice versa). Unfortunately, she's engaged to be married to Enrique, which leads to a brawl at an outdoor market and Enrique trying to harass Jimmy until he agrees to leave town.
Jimmy secretly meets Sarita in a graveyard, which is colorful and not dreary and ugly European and American ones, where she urges him to reconsider Enrique's offer. While he's gone, papa Pancho wanders off into the swamplands and never comes back. Jimmy decides to sell the ranch and then head back to America just as a village fiesta begins in celebration of Enrique and Sarita's wedding. Little Panchito runs off into the swamp to search for his father... So we're nearly an hour into this 78 minute movie, and you're probably like me and thinking; "What the heck happened to the beast." Well, it finally does show up with less than 20 minutes left to go and is a crudely-but-charmingly animated T-Rex dinosaur full of personality that was probably pretty impressive back in 1956. I love this kind of effect regardless of how well it's done. Was it worth sitting through an hour's worth of people riding around on horses, shots of cows grazing in fields and listening to a child's endless whining? I personally though so, but it'll take a pretty patient viewer to get that far. I'd fully understand if anyone would skip ahead to the last 15 minutes and just watch that.

The dino causes a cattle stampede (accomplished by hilariously speeding up the film) that kills two guys. Then it eats a cow. After that it starts chasing Panchito around and then moonwalks out of a mud puddle. Sarita and Panchito barricade themselves in a house and the dinosaur jogs circles around it. It runs down the mountain, slides down a dirt embankment on its butt and chases after a horse, all the while wiggling its tongue and making weird noises that usually sound like either an elephant or a bobcat. These scenes are great. The rest, not so much, though nice outdoor locations are utilized throughout.
The film was "based on an idea" (actually a story) by stop-motion fx master Willis H. O'Brien (KING KONG), who was otherwised not involved in this film. The same story would be refilmed a second time in 1969 as VALLEY OF GWANGI, which also mixed the western setting, cowboys and stop-motion dinosaurs (and other monsters).
★★
Posted by The Bloody Pit of Horror at 11:07 PM

Ha! Yeah, the dino did make some weird noise in those scenes!