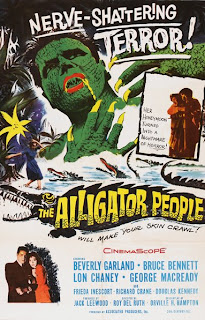 
The great trailer (see below) promises "suspense that will clutch you like quicksand, pulling you down into bottomless depths of suffocating horror!" The film hardly delivers all that, but it's actually pretty entertaining for what it is, thanks mainly to a highly enjoyable cast, offbeat setting and amusingly cut rate monster creations. The always spirited and lovely Beverly Garland (who passed away not too long ago - R.I.P.!) stars as Joyce Webster, a newly-married woman whose husband Paul (Richard Crane, of Rocky Jones fame) mysteriously disappears on their wedding night. Joyce then embarks on a frantic search for her missing mate, which leads her deep into the Louisiana Bayou to secluded Cypresses plantation and its strange and suspicious-acting inhabitants. She's greeted with hostility by the home's owner, Lavinia Hawthorne (Frieda Inescourt), who when forced to accomodate Joyce, advises her not to leave her room or go out at night and doesn't make it a secret she wants her gone the next morning.
.
Next door is a private clinic run by Dr. Mark Sinclair (an understated George Macready), whose well-intentioned experiments with accident victims; using a serum derived from alligator hormones and a cobalt radiation ray, have backfired in a big way and have turned his patients into "revolting scaly monarchs" and "hideous living gargoyles." If all that's not enough for you, Lon Chaney, Jr. has one of his flashier later day roles as a hook-handed, alcoholic backwoods Cajun brute/poacher who just loves shootin' gators (whether they're walking on two or four legs) because one had bit off his hand. It's all told in flashback, with Garland's character reliving the experience (years after the fact and under a new identity) to psychiatrists Bruce Bennett and Douglas Kennedy through hypnosis sessions.
.

.
Despite obviously cheesy alligator man designs and some dated laughs, this is actually somewhat better than it's reputed to be. Though there's some wooden acting from a few of her co-stars, Garland is excellent and really carries this film, the swampland scenes generate some genuine atmosphere and it's all harmless fun. Plus it was filmed in "Screaming Horrorscope!" In theaters, it played on the bottom half of a double-bill with RETURN OF THE FLY (1959) and in fact it was green-lighted for the very purpose. The DVD from 20th Century Fox is a nice widescreen print of the film.

Chaney does a good deranged job in this one.