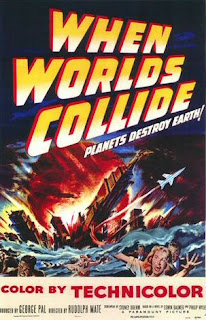 Directed by:
Rudolph Maté
El Mundo Evacua! Verdens Ende! Quittez La Ville! Das Ende der Welt! Extra! Extra! Read all about it! End of the world right around the corner! Things begin with a close-up of the Bible, with the cover swinging open to reveal the passage "And God looked upon the earth, and behold, it was corrupt; for all flesh had corrupted his way upon the earth. And God said unto Noah, The end of all flesh is come before me; for the Earth is filled with violence through them; and, behold, I will destroy them with the earth... " Uh oh. You know what that means. Our world is toast. At the Mount Kenna Observatory in Johannesberg, South Africa, scientists discover something speeding toward Earth at an alarming rate. They hire high priced delivery boy and ladies man David Randall (Richard Derr) to deliver a small black to Dr. Cole Hendron (Larry Keating) at the Cosmos Observatory in New York City. At the airport, he's met by Hendron's daughter Joyce (Barbara Rush), who escorts him to his destination. There, the box is opened and inside is data revealing that in eight months time the Earth is going to be destroyed by not one, but two, planets; Bellus and Zyra. Zyra is expected to pass so close to the Earth that it will cause mass destruction, earthquakes and tidal waves that will wipe out every coastal city on the planet. 19 days later, Bellus is expected to finish the job by making a direct hit. Yep, the world's about to come to an end.
At a U.N. meeting, the findings are brushed off and Dr. Hendron is labeled a crackpot. Fortunately, he's able to persuade billionaire Sydney Stanton (John Hoyt) to lend the funds to design a Noah's Ark-style rocketship capable of transporting 44 people, some animals and livestock and other important things needed to start life anew. Plans are made for the ship to planet hop over to Zyra (which is said to have an atmosphere similar to the Earth) after it passes through. Top male and female students in engineering, science, medicine and argriculture are drafted in to help, with those being able to board the ship being chosen at random at the end of the project. Tensions arrise later thanks to a love triangle between David, Joyce and Dr. Tony Drake (Peter Hansen) - who was about to marry Joyce before David came into the picture, as well as between Dr. Hendron and the heartless Stanton and another between young lovers Julie (Rachel Ames) and Eddie (James Congdon) - one of whom is chosen to go, the other not.
Nicely photographed in Technicolor, this George Pal production is a very good "end of the world" opus, with an exciting and suspensful premise, good performances (particularly Herr and Keating), nicely drawn characters and great special effects for its time. While some of the matte paintings don't hold up too well (particularly the one showing the new world at the end), other effects (which won an Academy Award) utilize excellent miniature models which effectively depict fires, bridges and buildings collapsing, avalanches and flood waters pouring into a city. The effects with the spaceship are also well done. In retrospect, you could pick holes through this (there's not a single minority in the film and thus none get an opportunity for a second chance at life on the new planet, the random selection of who gets to go might limit the specialists, etc.), but the same can be said for most films from this era. Highly influential, this went on to inspire everything from the Irwin Allen disaster movies to that spate of sci-fi meteor/comet destruction movies (ARMAGEDDON, DEEP IMPACT, etc.) that came out with a bang in the late 1990s. It's also slated for a remake sometime in the next couple of years.
.
Not particularly horror in the traditional sense, but I'm including it here for its scary end of the world/apocalypse theme, mass destruction scenes and obvious influence on similar films in the sci-fi and horror genres. Paul Frees narrates and provides the voice of the U.S. President and small uncredited roles are played by Kirk Alyn (Superman) and Stuart Whitman. Based on the novel by Edwin Balmer and Philip Wylie (which was adapted by Sydney Boehm) and executive produced by Cecil B. DeMille.
★★★1/2
Posted by The Bloody Pit of Horror at 5:11 PM