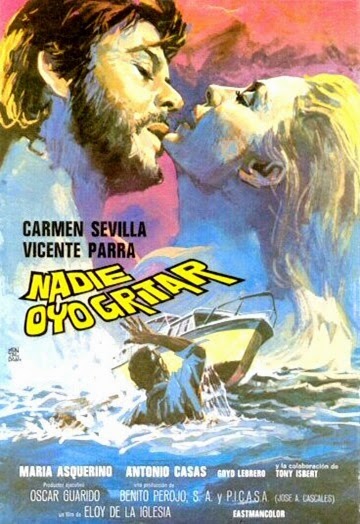 ...aka No One Heard the Scream

For starters, I have to say that the current 4.3 rating on IMDb is an absolute joke. This is a very good, drama/thriller with interesting characterizations, strong performances, suspense, good plot twists and a few well-time shocks. Middle-aged, still very attractive Elisa (Carmen Sevilla) has gotten by in life on her looks. We first meet her as she's bidding farewell with her wealthy older lover Óscar (Antonio Casas), who from all indications has been supporting her financially (apartment, car, money, plane tickets) in exchange for one weekend a month of her time. Elisa's growing tired of it, though, and decides to skip her flight to London so she can call off the arrangement. That night, her relief at being free and able to possibly start anew turns to horror as she exits her apartment and finds her next-door neighbor Miguel (Vicente Parra) dropping the freshly-killed body of his wife Nuria (María Asquerino) down an elevator shaft. Elisa runs back into her apartment and locks the door, but Miguel manages to get in through the window, brandishing a gun. Instead of killing her, Miguel decides to flip things around and turn her into an accomplice; making her accompany him across town so they can properly dispose of the corpse. As the two head toward their destination (a secluded beach house) there are a lot of suspenseful close calls with the police as well as a strange bond that starts growing between the two. After awhile, Elisa seem all too willing to cooperate with her abductor. After they sink the corpse in a lake, she even decides to carry on the relationship with Miguel when they return home to their respective apartments.

Director Eloy de la Iglesia is best known here in America for his 1972 shocker CANNIBAL MAN; which was good enough to encourage me to seek out more of his work. This is the first one I've been able to locate (his films are very hard to find here) and thankfully it's every bit as good as I was hoping it would be. Despite being listed as strictly horror on IMDb, this really defies genre and mixes drama, black comedy, suspense, road movie, character study, psychological thriller and horror, with a few jolts and bloody scenes. In that regard it reminded me a bit of Claude Chabrol's Le boucher; which is horror not in the traditional sense of jump scares, supernatural beings, gore, etc., but one more grounded in the everyday; in reality. It's the lows "normal" people can hit to fulfill themselves and find a sense of belonging in this world.

There are some very Hitchcockian scenes here, such as when Elisa and Miguel end up having to transport people injured in a car accident to a hospital and police ask him to put a suitcase in the trunk... where the body of his wife already is. However, the attention paid to the lead characters and how they were fleshed out is what made the movie stand out to me. We learn a bit more about each person as the film progresses and what makes both tick and what makes them eventually click with one another. Miguel is a man whose dreams of becoming a successful writer never came to fruition and who settled for marriage to a wealthy woman he didn't love instead. Elisa, though supported by a man (or possible several men), in turn has her own younger lover (Tony Isbert), who she supports. She seems to thrive on feeling needed, by someone, anyone, for any reason. At one point she even manages to turn the tables on her abductor and can easily kill him, but decides not to. Events like these may come off as silly in some hands, but they are completely plausible here because of strong dialogue, character detail and the performances. There's also a big twist at the end that I didn't see coming and an ending that is unexpected, ironic and tragic.

If you can find a copy of this anywhere, I highly recommend watching this. And if you need help finding a copy with English subtitles, feel free to PM me and I can point you in the right direction.