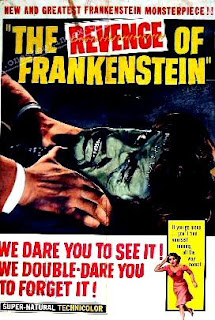 Picking up right where the original - THE CURSE OF FRANKENSTEIN (1957) - left off, Baron Victor Frankenstein (Peter Cushing) manages to escape execution by guillotine with help from hunchback Karl (Oscar Quitak). Three years later in the village of Carlsbruck, a Dr. Victor Stein (guess who?) has recently established himself with a lucrative medical practice and a hospital catering to the homeless. So popular is the new doctor that he's managed to win over many new patients, which doesn't set too well with the jealous doctor's counsel. In his spare time, Dr. Stein has been diligently working on a new pet project; the same one that failed in the first film because of a damaged brain. Having already constructed the body from spare parts gathered from dead patients over the years, Victor has found a willing brain donor in Karl, who is all-too-eager to escape his withered, half-paralyzed body. Victor has also found an assistant in ambitious young doctor Hans Kleve (Francis Matthews). At first, the brain transplant goes off without a hitch, but then Karl (now played by Michael Gwynn) decides to leave his hospital bed prematurely, gets into a scuffle with the janitor, damages his brain and becomes violent.
.
REVENGE is an entertaining - though less gruesome - sequel that's about on par with the highly regarded first effort. The original storyline (which was written by Jimmy Sangster) adds nicely to the Frankenstein canon of films and the production values are good across the board. It's well directed by the ever-reliable Terence Fisher, vividly photographed by Jack Asher and has convincing art direction and period detail. There's also an amusing twist ending. Mr. Cushing (excellent as usual) has been given slight alterations on his character this time out. Here he's a bit more savvy, collected, drolly humorous and seems to want to escape his past and live as normal a life as possible, while continuing to work on his experiments on the side. Though it's mainly Cushing's show, most of the supporting cast (especially Matthews and Gwynn) are just fine. And keep your eyes peeled for Lionel Jeffries and Hammer regular Michael Ripper as grave-robbers in one of the first scenes.
.
Followed six years later by THE EVIL OF FRANKENSTEIN (1964).
.
★★★
Posted by The Bloody Pit of Horror at 7:49 AM