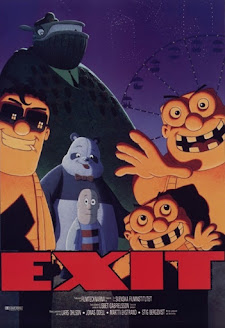 Directed by:
Stig Bergqvist
Martti Ekstrand
Jonas Odell
Lars Ohlson
Is there any such thing as too much fun? How about too much entertainment? Too much excitement? No? Well then, how about too much stimulation? Åke, two of his friends and one of their hyperactive young sons have saved up for an entire year to take a dream vacation to an amazing amusement park called "Get Happy." Whatever brings you joy, they've got it! After you enter through the inviting golden gates and exchange your cash for a sack of happy face tokens, you have access to roller coasters, bumper cars, old school carnival games, 3-D movies, circuses, casinos, disco dance clubs, chocolate fountains, video games, live music, endless delicious junk food and much, much more. For, shall we say, more adult tastes there are all manner of drugs, booze and male and female sex workers to indulge yourself in. A sadist with a craving for violence? Then try their gun-down-cute-woodland-animals shooting range!
Feeling overwhelmed by all of the "fun," Åke lets his friends (who are - unlike him - having a blast) go on their way and decides to sit down on a bench for a minute to take a breather. Unfortunately, a whale security guard shows up to push him into rejoining the festivities. The guard is so dead set on making everyone have a good time that he'll force you to smile and laugh... even if it takes pointing a gun to your head! Åke plays a carnival game and wins a giant stuffed panda bear that comes to insanely codependent life. All it wants is a hug. Make that many hugs. Endless hugs you could say. And if you're not hugging it, it will stalk you down until it can find you and hug you some more. There's no escape! 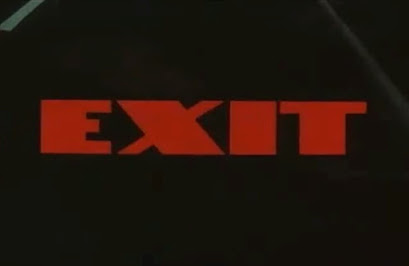 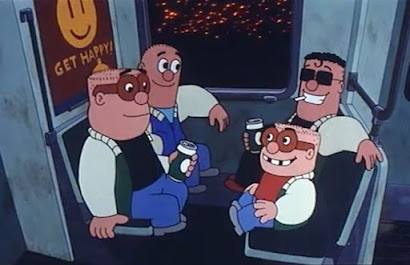 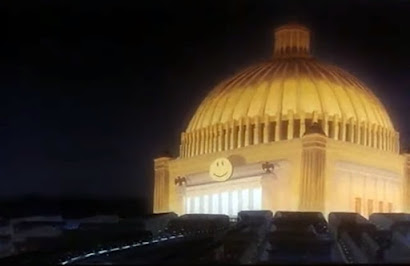 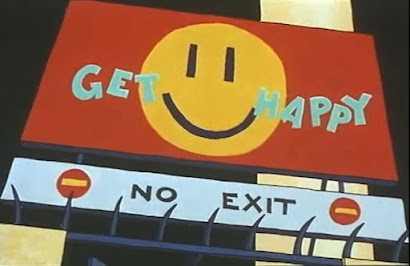 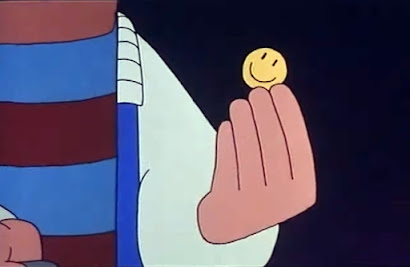 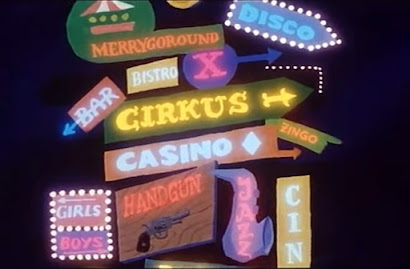 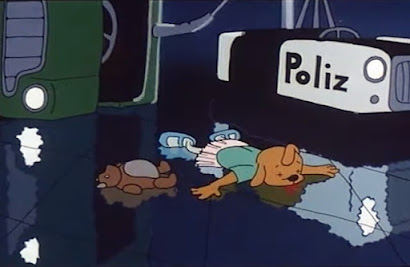 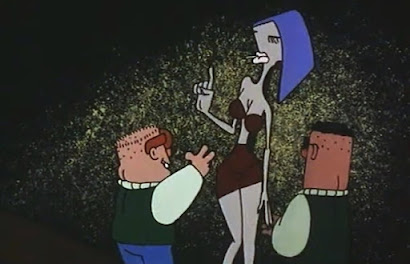 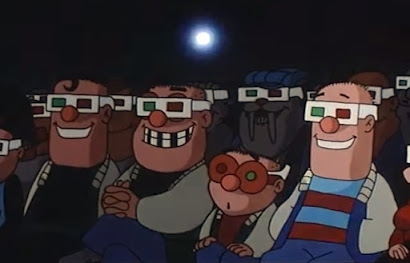 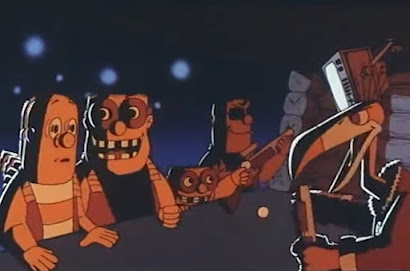 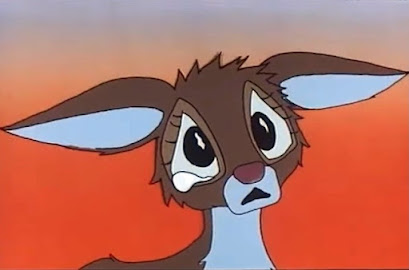 Åke tries to make a mad dash for the exit but has a hard time actually finding it. He's also neglected a park rule that states you can't leave until you use every one of your tokens. He's still got a bag full. Every time he tries to throw them away or give them away, the whale shows up to inform him that he's breaking the rules. And there's an especially strict rule about panhandling. Do it and you get executed. Åke rejoins his friends, has an encounter with a depressed old pig with a laundry list of diseases he's survived and a woman doing a live reading of Shakespeare in an abandoned theater that no one's interested in viewing before he decides to splurge on games, drink and sex. Anything to spend most of his tokens and get the hell outta there. He must however save one token back, which is needed to open the real exit door, but there's even a catch there! 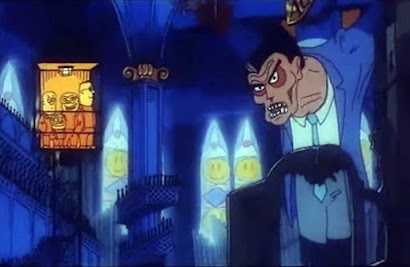 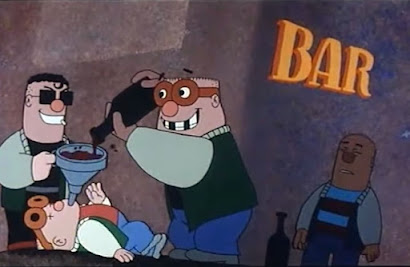 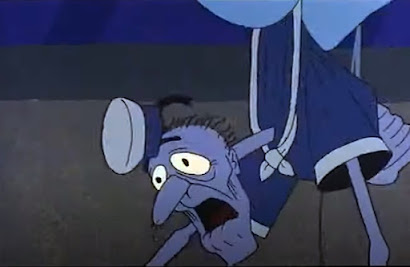 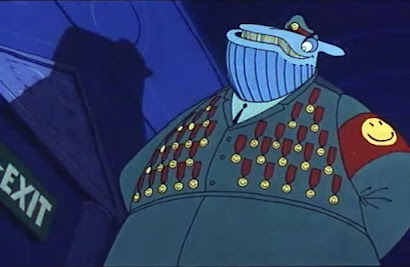 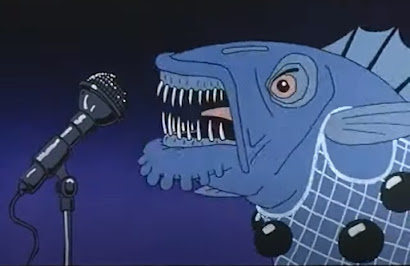 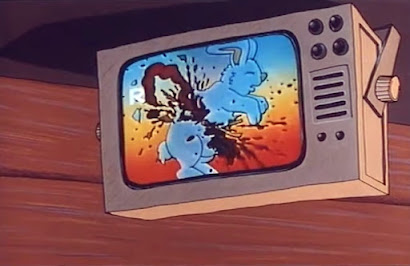 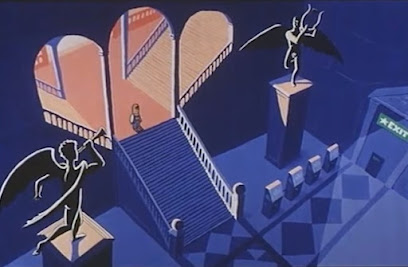 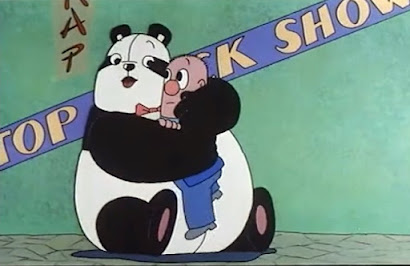 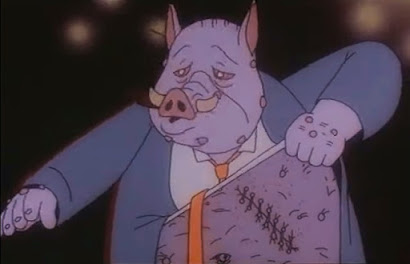 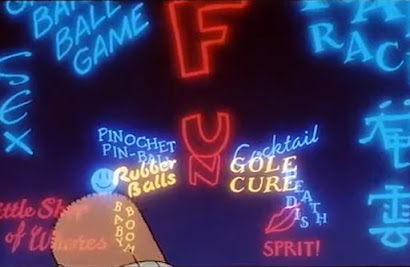 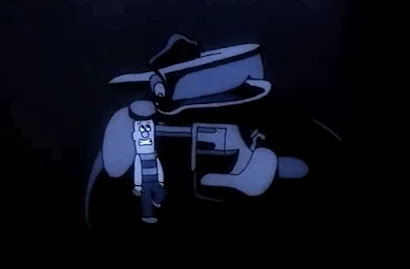 This great, highly imaginative and surrealistic 20 minute animated short from Sweden is amusing and nightmarish in equal measure, so packed with small, clever details that it requires more then one viewing to soak it all in and makes a lot of interesting observations about excess and need for instant gratification in our consumerist, capitalist culture. Åke is far more pensive, generous and empathetic than his friends and, interestingly, the one moment that seems to bring him true joy, giving to the poor and needy, is quickly extinguished by the guard, who's sometimes shown dressed up like a fascist dictator. Not surprisingly, most of the directors have successfully continued on in animation through the years. Especially prominent are Bergqvist, who later worked on the Duckman and Stressed Eric TV shows and made the feature Rugrats in Paris, and Odell, who ended up working on numerous shorts, commercials and music videos for the likes of Franz Ferdinand (which earned him a Grammy nomination), Goldfrapp, Madonna and U2.
Thirty years after its initial release, this is still regularly screened at film festivals around the world. It's available on DVD on several Swedish animation compilation releases, including Livet Från den Mörka Sidan: Animerade Filmer För orädda Vuxna ("Life from the Dark Side: Animated Movies for Fearless Adults") and Alla talar svenska! ("Everyone Speaks Swedish!") English subtitles are available.
★★★1/2
Posted by The Bloody Pit of Horror at 11:27 PM