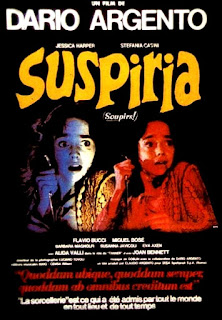 
I've always had a love / like relationship with this film. Had you asked me a decade ago to list my favorite horror films of all time, Suspiria would quite likely get a quick mention. But then I went through a period where some of the film's flaws just kept jumping out at me and it went down a little in my estimation. Now I never outright disliked this film. On the contrary, I've enjoyed watching it occasionally ever since I was a kid. It was one of the first films I owned on video, one of the first films I bought on DVD and the film that helped get me into Argento films at a young age. I was so fond of it and Creepers that I was lured onto ebay back in the dial-up days and shelling out a lot of money trying to get my hands on any film Argento I could. You know, back when finding something like the heavily-cut copy of Tenebre called Unsane was the best one could hope for. But then we get a bit older and our tastes tend to change...


Over time and many viewings, I just got to the point where I wondered if Suspiria was truly worthy of the acclaim and a high placement on nearly every critic's top horror film lists. I mean, there's absolutely no denying its visual merits, but is it really so stylish that it manages to overcome its many narrative shortcomings? And the poor dubbing / dialogue? And some numbskull character actions? And the hokey stuffed bat attack? And that painfully bad scene where our heroine goes to a psychiatry convention to find out about witches and Udo Kier, bizarrely shot from the ground up, appears to be reading his lines off of cue cards? Now having taken a long hiatus and armed with a copy of the 40th Anniversary Synapse 4K restoration Blu-ray, I'm interested in seeing how I feel about this one now. 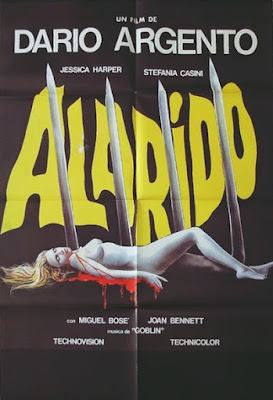 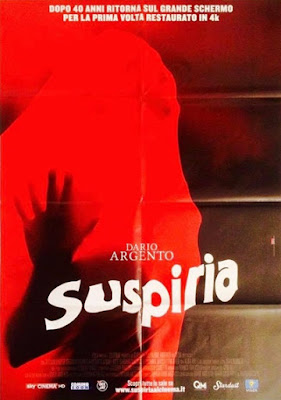 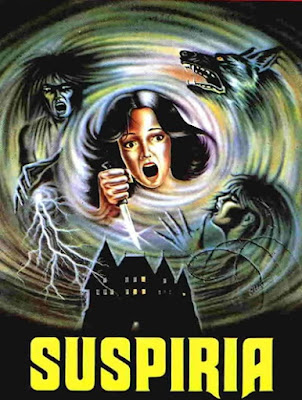 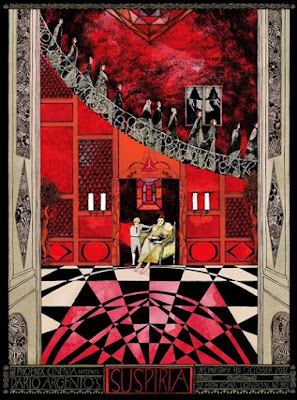 Upon receiving her acceptance letter, American ballerina Suzy Bannion (Jessica Harper) travels to Freiburg, Germany to start training at the esteemed and exclusive Tanz Akademie. It's late at night when she arrives and she's given a chilly reception right at the front door, with a frantic young woman muttering something inaudible before fleeing the building and another girl coming over the intercom telling her to "Go away!" And that she does, right to a hotel for the night. The fleeing girl - Pat (Eva Axén) - ends up at her friend Sonia's (Susanna Javicoli) apartment, but someone, or something, has followed her there. Whatever it is manages to float outside a third story window, busts its hand through the window and grabs her. Next thing we know she's being stabbed repeatedly. She's tied up, falls through a stained glass window and is hung by the rope, while Sonia gets impaled by the falling debris (glass and a metal pole).

The following day, Suzy returns to the academy to begin her training. She's introduced to vice directress Madame Blanc (Joan Bennett), once a very famous ballerina herself, and is shown around by the stern Miss Tanner (Alida Valli), who acts more like a prison warden than a teacher and constantly has a red face from screaming so much. Most of the dancers there prove to be immature, snobby and / or money-obsessed, though Suzy is befriended by fellow student Sarah (Stefania Casini), who doesn't quite fit in herself. And then Suzy begins picking up various signs that something sinister is afoot.


For starters, the staff can't seem to make up their mind about Suzy's accommodations. She's initially told that instead of boarding at the school, she's to live off campus in an apartment with third year student Olga (Barbara Magnolfi). But after she tells investigating detectives that she saw Pat on the night of her murder, they then try to coerce her into moving to the school... almost as if they want to keep a close eye on her. When she resists, she's briefly blinded by a crystal the cleaning lady shines at her and passes out. When she comes to, all of her belongings have been moved to the school; pretty much forcing her to stay there. A quack doctor puts her on a strange diet of bland food and thick red wine, even though Suzy's fainting spell seems to have been an isolated incident and she feels fine. But it does help her sleep well at night. Almost too well.

Suzy's first few days there, she's greeted by a maggot infestation (blamed on spoiled meat in the attic) and the death of blind pianist Daniel (Flavio Bucci), which occurs after his usually well-behaved seeing eye dog bites the cook's young son and, later, chews out his own throat. She learns a bit more about the strange occurrences at the academy from Sarah, who was Pat's friend and is in possession of some notes Pat was keeping that point in the direction that the school is run by a (gulp!) coven of actual witches. After relaying just a bit of information, Sarah promptly disappears and her room is completely cleaned out, with Miss Tanner claiming she must have run away in the night.

As for Tanner and the rest of the staff, they claim to live in town, but their footsteps late at night tell a different story; one where they're not even leaving the building at all. There's also the issue of the mysterious primary school director that no student has ever met and the staff keeps well hidden. She may be somehow linked to a Greek emigre named Helena Markos. Known as "The Black Queen," Markos had previously been expelled from several European countries for practicing witchcraft until she permanently found a home in Freiburg and established the Tanz Akademie. She supposedly died in a fire back in 1905. Supposedly.

Suspiria is quintessential "style over substance." While the screenplay (by Argento and his then-partner Daria Nicolodi) holds little of interest, the dialogue is often clunky and the post sync dub is sometimes distracting (though there's certainly a lot worse), the film is so visually captivating, imaginative, well-crafted and gorgeous to look at, that it frequently transcends the narrative altogether. Great care has gone into the look of virtually every shot. Giuseppe Bassan's production design, Luciano Tovoli's cinematography, the lighting and vibrant colors overlaid with a bombastic, chilling and unique score from prog rock group Goblin (with assist from Argento himself) all combine to create some of the most effective and mesmerizing sequences in horror film history. The opening ten minutes and Sarah's death scene are the standout set pieces here, but virtually every frame at least holds something of aesthetic interest. So, I'm happy to report that Suspiria has managed to cast its spell over me once again all these years later, perhaps most especially now that it's looking and sounding better than ever. 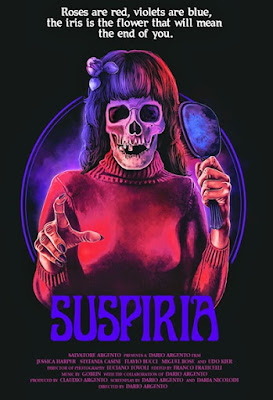 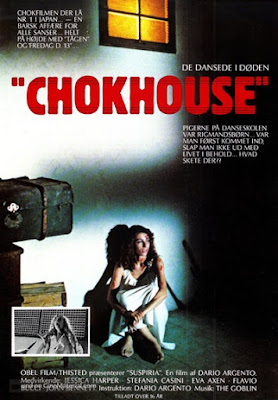 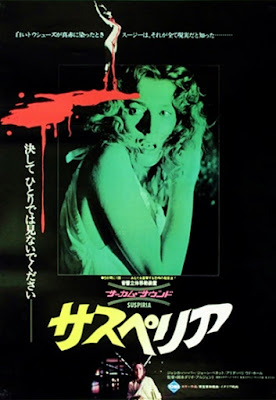 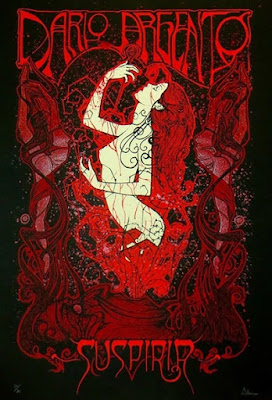 This is the first in the "Three Mothers" trilogy that also includes the New York City-set INFERNO (1980) and the Rome-set Mother of Tears (2007); all of which involve witches spreading evil from three distinct locations. Since the third entry took so long to make, Luigi Cozzi made his own unofficial pseudo sequel in the interim titled Il gatto nero / The Black Cat (1989). A remake, which uses the basic plot of the original but has a bunch of added subplots and a completely different visual style, was released in 2018. Directed by Luca Guadagnino, who'd previously made the popular (and Oscar nominated) gay coming of age film Call Me By Your Name (2017), the two-and-a-half hour film polarized both audiences and critics.

I agree. Like this and INFERNO because of Argento's direction. The story isn't much. Didn't care for the third one.

great read. finally caught up with OPERA (1987) in 2015. was like seeing an old friend you have nothing in common with anymore. really felt as if i'd moved on. got me wondering what i'd think of his other work now. enjoyed CRYSTAL PLUMAGE (especially as a fredric brown fan) and TENEBRE in the past. twenty years ago the long cut of DEEP RED would've been among my 10-15 favorite horrors.

SUSPIRIA didn't wow me like i expected it to, but i only saw it once, on VHS.

I think Argento waited too long to make Mother of Tears. It just doesn't feel a part of the Suspiria / Inferno universe at all and filming techniques changed too much in the 25 years between it and Inferno.

The one Argento film I actually thought was overrated for the longest time WAS Deep Red but I only saw a crappy cut version, which was also far too dark. After finally seeing the uncut / remastered version a year or so ago, I now consider it easily Top 3 Argento. But I think Phenomena may be my all-time favorite of his films. I love how wacky it is, the music, the camerawork and how it has both giallo and supernatural aspects.

i only saw PHENOMENA on tape (as CREEPERS). probably not the best format/presentation for movies like these. the anchor bay DEEP RED was one of the first DVDs i got (didn't have a player until late 2001) and it blew me away. i wanted to go back through all his classics again at some point, but the relatively fresh rejection of OPERA worries me. i picked up TENEBRE on blu a year ago and still haven't given it a look.

Believe it or not, I actually PREFER the cut version Creepers; at least how it's edited. It accidentally enhances the surreal qualities of the film and removes the worst scenes from the longer version. The only restored scene I liked was in the dorm room with Jennifer, which provides some added characterization. The rest, not so much. Most of what was cut were awkward bits or scenes that didn't have much to do with the plot. However, it's best seeing the uncut version anyway because the quality is, of course, much better.

I also prefer the cut version of Fulci's The Beyond that's titled 7 Doors of Death for about the same reasons as Creepers, except it also features a new synth score that I like more than the original music!

I've seen all of the older Argento movies numerous times but still need to do full reviews of most of them. Last time I checked I preferred Opera over Tenebre but I don't know how I'd feel about them now. I guess we'll see!

i'm not a fulci fan, so i'll probably never get around to the uncut BEYOND. originally scored by frizzi, right? i liked his main-title theme for ZOMBIE.

Yes, by Frizzi. And I generally love his music, most especially his score for Zombie. But I just didn't care for his The Beyond score as it applied to the film itself. The 7 Doors score sounds more serious and otherworldly.