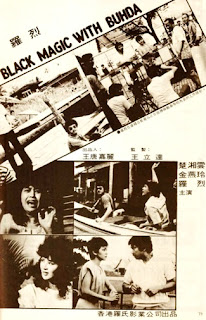 
Director Lo knows all about black magic, but we're getting a little ahead of ourselves here. Born in 1939 under the name Lida Wang in Pematangsiantar, Indonesia to Cantonese parents, Lo immigrated to Hong Kong as a teenager. While still in his early 20s, he started training in martial arts and soon became a member of Shaw Brothers' stable of talent. Several years before Bruce Lee became internationally famous, Lo became the studio's very first kung fu superstar in his breakthrough film The Invincible Fist (1969). Many more martial arts films would follow in the 60s and 70s, most famously the cult classic Five Fingers of Death (1972), but because of the actor's perpetually angry look and brutal fighting techniques, he found himself being typecast almost exclusively as villains. The same intense persona and screen presence would later land him a lead role in Shaw's BLACK MAGIC (1975), where he played the obsessive admirer of a rich woman who attempts to use black magic to get both the beauty and her money. The film was so popular it resulted in a sequel, BLACK MAGIC, PART II (1976), the following year with Lo playing a powerful 80-year-old sorcerer who retains his youthful looks by drinking breast milk (!) and spends much of his time casting spells on the unsuspecting cast in order to get sex and line his bank account. Those two roles certainly prepared Lo for this one; his first and only foray into the genre as director. He also plays a sorcerer here (though a good one this time) but doesn't even appear until the second half of the film. 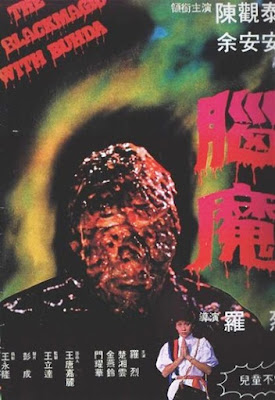 Indebted to a man who saved his life but has since passed, Master Abdulla repays him by taking his son Ben Chin (“Chau Koon” / Kuan Tai Chen) deep in the Indonesian jungles to a cave where its rumored a powerful sorcerer is buried. After they locate the tomb, Abdulla performs a ritual and instructs Ben to stab the mummified sorcerer through the heart with the dagger. The head cracks right open and the brain is put into a box. According to Abdulla, Ben should use it just one time to grant any wish he wants but after that he's to destroy the brain with holy water. If he doesn't and decides to get greedy, well, there's no telling what horrible consequences may befall him and those he loves. After the two men leave, the cave shakes, catches fire and blows up. 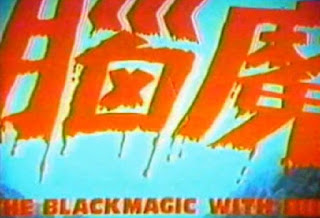 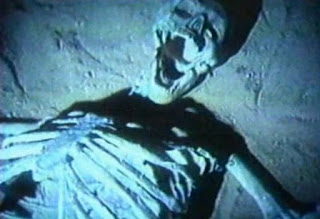 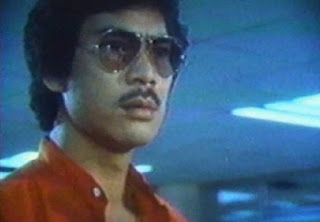 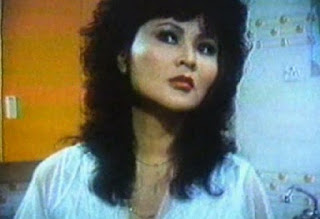 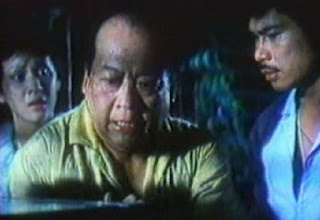 Ben flies home to Hong Kong and is easily able to get through security because the brain can appear and disappear whenever it wants. He meets up with his girlfriend Annie (Candice Yu) and her sister-in-law Mary (Sinjai Hongthai) and accompanies the two to the hospital to visit their ailing father. Though pops gives his blessing of marriage, Annie's controlling brother Kit steps in and forbids it; demanding he get his shit together and start making more money first. Ben then consults the magical pulsating brain. He gives it an offering of animal brain that it eagerly slurps up and then prays to it to give him a million dollars so he can marry Annie. Not long after, Ben's stingy sister (Elaine Jin) is murdered by some kind of heavy-breathing supernatural force that knocks her off the roof and then throws her through a window. Ben inherits the million dollars from her death, which is enough... for the time being. However, he makes the big mistake of not destroying the brain, which comes back to haunt him in a big way. 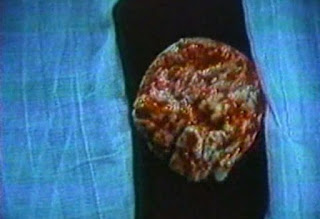 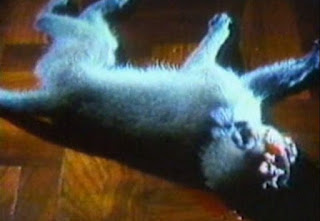 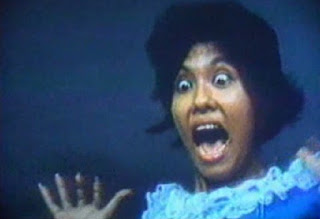 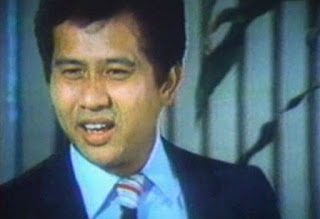 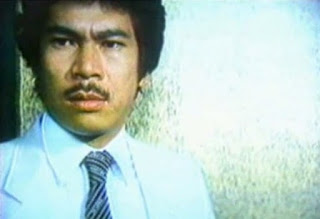 After getting married, Ben and Annie's happy home quickly becomes a house of horrors. He gets caught up in a blood shower. She spots something shiny and slimy slithering up the walls. A dead monkey with its brains eaten is found on the floor, followed by a dead brainless dog outside. Ben wants to start a gold reserve investment company and goes to his father-in-law for a loan, but Kit sticks his nose in once again and insinuates that the only reason he married into the family was for money. Ben goes home and prays to the evil brain once more, which ends with the brother-in-law getting attacked and killed in his bathtub by a bunch of bloodsucking brains! After Annie's weak-hearted father and the now-widowed Mary move in with them, Ben continues using the brain and soon finds his father-in-law offering to sign over everything he owns to him. He also discovers he now has little control over the brain, especially after Annie accidentally destroys the vial of holy water needed to destroy it. Attempts to bury it, burn it, beat it to a pulp with a shovel and even squashing it under a huge rock don't work. 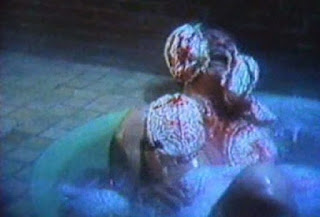 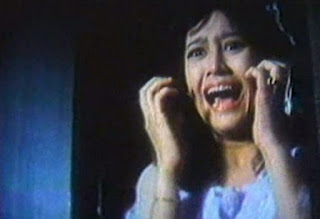 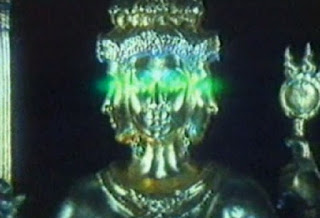 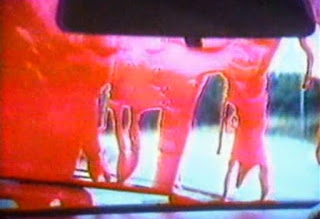 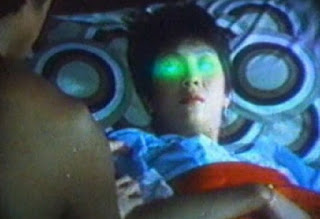 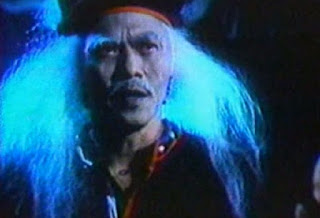 While Ben continues to be haunted by the brain, Annie has a religious conversion after visiting a shrine and seeing the eyes on a statue of “The God of 4 Faces” glow. She suddenly becomes “at peace” (completely complacent), throws out all of her make-up, becomes a vegetarian and refuses to have sex with her husband. Thinking she's under a spell, Ben goes to visit a white-haired old sorcerer (the director), who performs an exorcism that has Ben puking up brain matter. Things get even crazier once a reanimated 8-armed statue, a serene Buddha spirit (with a red Swastika painting on its chest!) and the sorcerer all combine forces in an effort to stop the Brain Devil, which eventually takes over Ben's body and turns him into a bloody, gloopy monster. 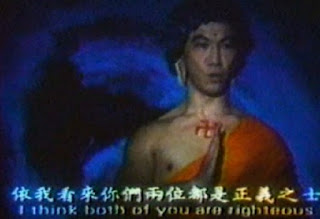 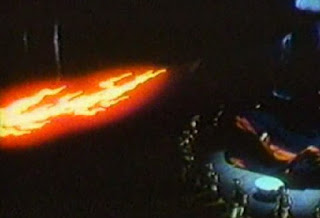 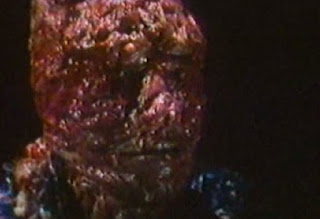 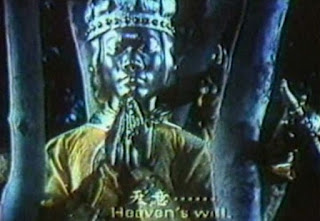 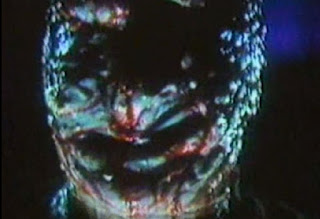 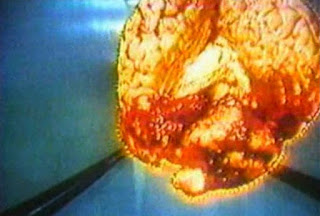 This was released independently through the director's own fledgling company Lo's Films and appears to be their only release. You may be reminded of such later films as The Brain and Brain Damage while watching it, but it gets sillier and messier the longer it goes on. The disco song “Don't Let Go” (the same one Ed Harris dances to in Creepshow) is heard during a bar scene. It was never released in the U.S. and has only received VHS and VCD releases in Asia. The Thai release (the one I watched whose title translates to "Monster Brains") has burnt in English subtitles.