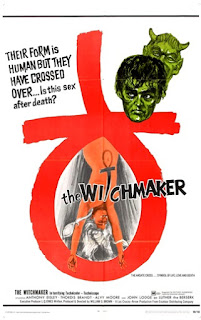 
After taking a dip in a pond, a woman is attacked by a hulking, pale-faced man as she's getting dressed. He knocks her out, rips off her bra, draws a symbol on her stomach, hangs her from a tree by her feet, slits her throat and then collects her blood in a bucket. She's not the first young lady to die in a similar fashion (“...hanging there like a cut hog”) in the same Louisiana swamp and is actually the eighth victim in the past two years. Police have come there numerous times to investigate matters but have come up empty-handed in their investigations. A local thinks there's a “prevert” on the loose, but a small research team believe something supernatural may be afoot and show up to look into things. Posing as a movie scout there to check out locations, Dr. Ralph Hayes (Alvy Moore, also the associate producer) is actually a professor there to do  “psychic research.” To help him, he's brought along psychic “sensitive” Tasha (Thordis Brandt), skeptical reporter Vic Gordon (Anthony Eisley), his secretary Maggie (Shelby Grant) and young students Owen (Tony Benson) and Sharon (Robyn Millan).

During the boat trip to a secluded cabin they'll be renting for a week, old timer Mr. LeBlanc (Burt Mustin) tells them all about the local witch legends and says that once he drops them off, there's no way back to civilization until he comes out there to get them. Far as he knows, no one's made it through the gator, snake and quicksand infested swamps by foot and lived to tell about it. As everyone's getting settled in, the man who's been periodically killing local girls spies on them from the brush. He's eventually revealed to be a powerful Satanist by the name of Luther the Berserk (John Lodge). Luther immediately falls in love with the beautiful Tasha and learns her grandmother was also a witch, which makes her suitable for membership into his coven. Luther calls forth an old, ugly hag witch named Jessie (Helene Winston) and strikes up a bargains with her: He'll help to restore her youth and beauty in exchange for her helping him get his hands on Tasha. First, they need to blood of a young virgin...

Using her magic, Jessie possesses Tasha's body and uses her to lure innocent Sharon into the woods, where she's promptly pummeled and then drained dry by Luther. Once the blood ritual is complete (which involves Tasha getting her lower back branded with a hot iron and then professing her eternal love to a Satan bust), Jessie transforms into a newer and hotter model (played by Warrene Ott). Luther and Jessie then decide it would be best to use Maggie as their next blood donor and knock off all the male researchers so there'll be no one left to get in their way. Our heroes, meanwhile, try to devise their own plan to stay alive. Since their boat won't be arriving for days, they plan on using Maggie as bait to lure Luther out of hiding so they can kill him. Wild garlic, which supposedly makes humans invisible to witches, and fresh pig's blood, which is said to be fatal if ingested by those in line with Satan, are two of the things in their bag of witch-fighting tricks.

Witchmaker has both bad points (which we'll get to first) and good points. The movie is overly-talky and the dialogue is frequently leaden, which may not have been a huge issue if they had decent actors to pull it all off. Alas, the acting in this one is incredibly wooden by nearly the entire principal cast, with the two biggest names on the payroll (Green Acres star Moore and TV and exploitation flick regular Eisley) being perhaps the biggest offenders. The two exceptions to the bad acting rule are Lodge, whose fun and animated performance puts most of the others to shame, and Winston, who's effective in her small witch role (she also dubs the younger version of her character). The biggest issue with this one though is that things really drag after the first 10 or so minutes. The initial set-up is adequate, but then minor plot points start getting dragged out in a dull, lifeless manner, resulting in a mid-section that's both plodding and tedious.

Thankfully, the last 15 to 20 minutes are pretty good payoff for slogging through the rest. These final scenes show us what goes down at a Witch's Sabbath when Luther calls forth ten other members of the Satanic elite for a shindig that includes food, dance, sex, lashing (of one of the gossipy female members) and (they hope) a climactic initiation of their thirteenth member. With its more academic and pseudo-scientific approach to the paranormal, this also feels a bit ahead of its time and elements of many later witch / Satanism / ghost movies can be seen all over this one. In other words, this may have been a more influential film than usually given credit for. One of the other places this excels is in the atmosphere department and the filmmakers do as wonderful a job utilizing the desolate Louisiana bayou locations as cinematographer John Arthur Morrill does filming them. While all of the above helps, it's not quite enough to overcome the other major problems at hand. 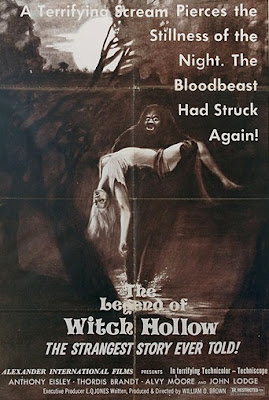 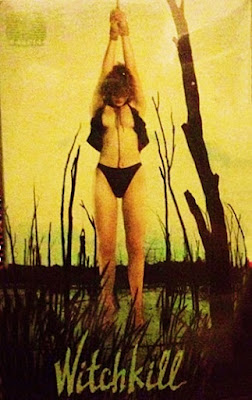 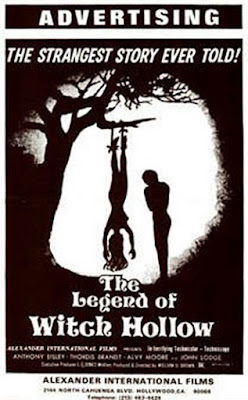 If you happen to like seeing Playboy centerfolds on the silver screen, you've lucked out here as this features not one, not two, but four different Playmates in small roles as coven members. The first of these is Diane Webber, who was a rare two-time Playmate (May 1955 and February 1956) and one of the most famous nude models of her day. Webber would also become a spokeswoman for the nudist colony lifestyle and a belly dancing instructor. Her skills at the latter are even briefly showcased in this film. Playmate #2 is Sue Bernard (December 1966), who'd previously appeared in the cult classic Faster Pussycat! Kill! Kill! (1965) and went on to play small roles in Necromancy (1971) and THE KILLING KIND (1973) before marrying actor Jason Miller. Nancy Crawford (April 1959) and Gwen Lipscomb (April 1967, as “Gwen Wong”) are the other two. In addition, Patricia Wymer, who also did some nude modeling work and received top-billing for a pair of Crown International releases around the same time, has a small role. One would think that with this female cast the nudity would be through the roof, but there's no actual nudity in the film itself. All naughty bits are amusingly covered with strategically-placed hands, plants, cups, etc.


Some viewers may also recognize the oldest of the male coven members, who's played by former Los Angeles-based TV horror host Seymour (aka Larry Vincent), who hosted numerous late night horror shows and also made appearances in The Incredible 2-Headed Transplant (1971) and Doctor Death: Seeker of Souls (1973) before his death in 1975. 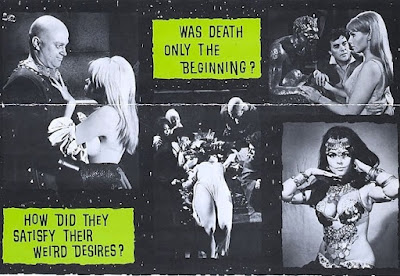 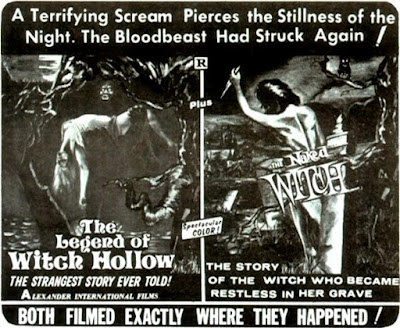 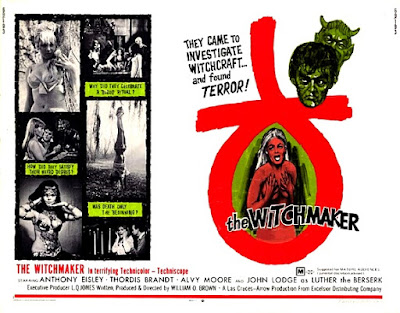 Made in response to the popularity of Ira Levin's best-selling novel Rosemary's Baby the same year Polanski's classic screen adaptation became a hit, this was conceived to show specifically at drive ins. According to executive producer L.Q. Jones (in an interview on the Code Red DVD), cars were lined up for miles to see it and the film set records on the drive in circuit. It played on a double bill with Larry Buchanan's THE NAKED WITCH (1961) is some venues and with THE HOUSE THAT SCREAMED aka La residencia (1969) in others, often using the title The Legend of Witch Hollow. Jones also claims he had a hand in writing, selling and shooting it sans credit and that it was endorsed by Anton LaVey (“a fun man to talk with”) and his Church of Satan! The film's success led Jones and Moore to produce another witchcraft film: THE BROTHERHOOD OF SATAN (1971), which turned out much better than this one.

Nice write-up. I've always really enjoyed this, although as you say the follow up Brotherhood of Satan does a much a better job. Never realized about all the Playmates though ! There's also a few Dragnet connections lurking about also. Thanks, enjoyed the write-up (and your blog is pretty cool too).

Thanks. I never caught any Dragnet connections myself.

This used to play on late night TV all the time in the seventies. Now I have a chance to see it un-cut. Didn't know about all those Playmates either. Nice review.