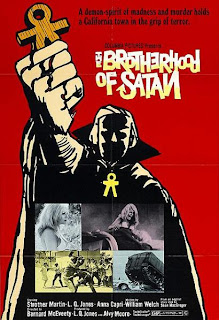 I was expecting another mediocre 70s Satanism movie (thanks to the middling reviews this often receives) and instead got a invigorating, thoroughly entertaining, visually beautiful and sometimes even surreal take on the subgenre that's full of small and unexpected surprises. While it may crib ideas from such varied sources as VILLAGE OF THE DAMNED (1960) and ROSEMARY'S BABY (1968), this manages to differentiate itself - in both story and presenation - and finds its own unique tone in the process. It's also expertly paced, has some very interesting art direction and vivid lighting and boasts a smart, nicely-layered script that immediately starts building intrigue through ambiguity before revealing too much of the actual plot. Things begin with a perplexing sequence of a toy tank, followed by a real tank rolling over a car and crushing an entire family. Well, aside from a little boy, who miraculously manages to walk away from the wreckage completely unscathed to join some other blank-faced children.

Vacationing engineer Ben (Charles Bateman), a widower from California, along with his young daughter K.T. (Geri Reischl) and girlfriend Nicky (Ahna Capri) are driving through the desert when they pick up strange static over the radio. They stumble upon the crushed car and the bloody remains of the people inside, and then drive off for help. Upon arriving in the small town called Hillsboro, the family encounters an uncooperative cop who doesn't seem the least bit interested in the accident and are immediately chased away by a mob of armed, crazed townspeople. They get in the car, take off and end up swerving and crashing to avoid hitting a little girl who seems to materialize out of thin air in the middle of the road. Now they have no choice but to head back to Hillsboro to find a mechanic. Before they do, we bear witness to a strange scene of a possessed doll using supernatural powers to kill a couple. Afterward, the couple's children wander off the join the same children who appeared at the accident site.

Ben, Nicky and K.T. finally end up getting some information about the strange events that have been unfolding in Hillsboro. Prior to their arrival, twenty-six people had been slaughtered in just 72 hours, and nearly every child between the ages of 6 and 9 have disappeared. Even stranger, some kind of malevolent supernatural force has kept anyone from entering or leaving the town for three whole days. Well, with the sole exception of Ben and company. As we later learn, there's a shortage of little girls of the appropriate age in the area... and eventually K.T. is among the missing children. Ben and Nicky set out to discover just what in the hell (pun intended) is going on. They're joined by the genial town physician Doc Duncan (Strother Martin), the frustrated Sheriff Pete (L.Q. Jones) and his deputy Tobey (Alvy Moore), as well as a priest (Charles Knox Robinson), who is doubted by everyone at the beginning and then ends up going a little crazy after witnessing a decapitation. I'm not going to reveal much more about the plot aside from mentioning it involves soul transference and a "circle of thirteen" devil cult.

If this had been made in any country other than the United States, it would be praised for its highly stylized and colorful lighting and amazing art direction. In fact, I strongly suspected that Dario Argento saw this movie before he made his critically-acclaimed SUSPIRIA (1977). The two not only share basic plot similarities but also feature a surprisingly similar color pallette and very abstract production design. Brotherhood also boasts one of the strangest children's parties I've seen (complete with a hooded Satanist delivering some black-and-red cake), plus has a long, artsy and truly bizarre nightmare sequence and other memorable moments. The ending is also unexpected and excellent.

It was produced by co-stars Jones and Moore. The DVD (a handsome print) is available through Columbia TriStar.