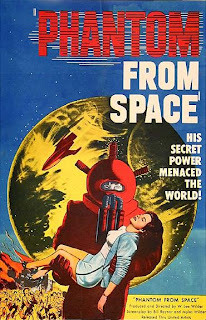 
What happens when you want to make a science fiction movie about an alien invader but don't have the money to create an alien? Why, you make it an invisible alien, of course! Over a montage of mostly stock military clips, a monotone narrator gives us a blow-by-blow of a comet hurtling toward Earth, passing through Alaska and Canada before disappearing somewhere over the skies of California. Soon after, people are flocking to the authorities claiming to have been attacked by someone or something dressed in a "flying suit" with a "horned helmet" (i.e. a diving helmet) around Santa Monica. Others claim it's "headless." Your usual assortment of cops ("This guy's walking around in a monkey suit... Killing people!"), scientists and reporters are on the case. They manage to locate it at an oil refinery, it pushes a guy down, runs off and baricades itself in a building. Right before the cops bust in, the alien takes off its suit to reveal its invisible and is then able to sneak off. Analysis of the suit proves it's made from a material... NoT oF tHiS wOrLd... They determine the alien is slowly dying because of our atmosphere and needs his helmet back, but even then things look grim. The alien manages to sneak into the lab, desperately tries to tap out messages and its high-pitched cries can only be heard by a dog named Venus.

This very talky low-budget film takes forever to get going, introducing dull stock character types played by OK but pretty nondescript actors along the way. But if you can make it to around the midway point (no easy feat), it becomes a bit more interesting. The invisibility effects (such as the alien carrying a woman, removing its spacesuit, a gravitating helmet and lifting up a pair of scissors) are passable, but this seems to save its better effects for the very last scene when the alien finally materializes. The cast includes Ted Cooper (who had a bit in THE THING FROM ANOTHER WORLD), Michael Mark (Corman's THE WASP WOMAN), Rudolph Anders (FRANKENSTEIN - 1970), former "Taster's Choice" coffee spokesman Harry Landers and James Seay, who starred in KILLERS FROM SPACE (1954) for the same director.

Polish-born Wilder is the older brother the much more famous Billy Wilder, writer/ director of such classics as DOUBLE INDEMNITY (1944), THE LOST WEEKEND (1945), SUNSET BLVD. (1950) and THE APARMTENT (1960). While Billy was racking up critical acclaim and award nominations (including 14 Oscar nods from 1940 to 1967), W. Lee (or Wilhelm) was off making stuff like this, which was co-written by his son Byron Wilder (who'd go on to become a prolific TV writer himself). W. Lee also made THE SNOW CREATURE (1955), FRIGHT (1956), THE MAN WITHOUT A BODY (1957), BLUEBEARD'S TEN HONEYMOONS (1960) and THE OMEGANS (1968), his final film (he passed away in 2002). Apparently the two filmmaker siblings had nothing to do with one another in real-life; Billy was even quoted as calling W. Lee "a dull son of a bitch."

This was a funny movie! Strange about The Wilder Bros. Yet they both made entertaining movies in their own way!