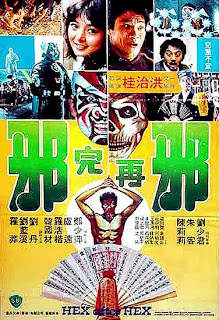 
Director Chih-Hung Kuei's Hex trilogy concludes with this third and final installment for Shaw Brothers. It has absolutely nothing to do with the serious Diabolique variant HEX (1980) and is instead a direct follow-up to the first comic sequel, HEX VERSUS WITCHCRAFT (also 1980). In HvsW, a desperate, down-on-his-luck man with a gambling problems gets more than he bargained for marrying a ghost for money. This sequel initially follows a similar premise but then shoots off in its own crazy direction. Checking out a knock on the door late one night, muscular movie stuntman Ma Su (Meng Lo) - neighbor of the guy from the previous film - finds a parcel full of gold and valuables laying on his doorstep. He thinks he's lucked out until old Mr. Liu (Chi Hing Yeung) shows up to inform him that he can only keep the money (plus he'll get a house) if he agrees to marry his daughter, Ah Tsui. The daughter happens to love muscular, fit men so it appears to be a good match-up. Well, except for one tiny detail: Ah Tsui is dead. Ma Su refuses to marry a ghost, but when the old man returns home, the daughter's angry spirit leaves the altar. The ghost causes a car accident that kills Ma Su's pretty neighbor Suk Yi (Nancy Lau Nam-Kai) so she's able to inhabit her body and make a play for Ma Su herself. 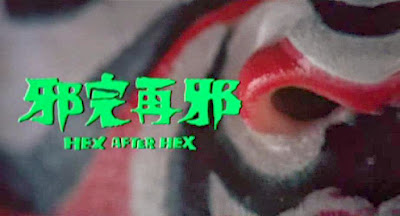 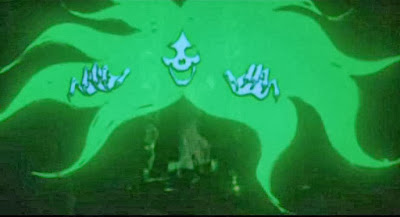 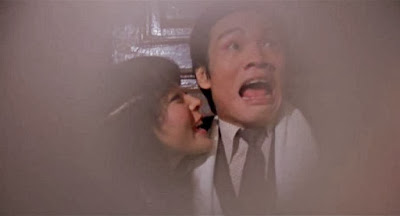 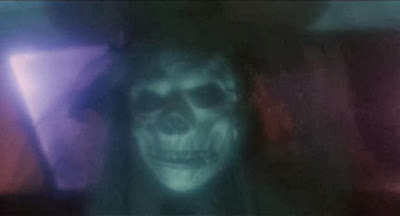 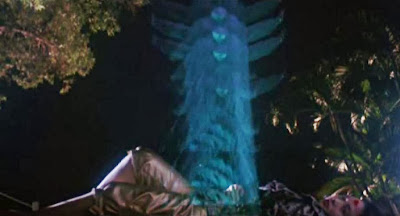 Suk Yi / Ah Tsui shows up at Ma Su's apartment and insists he call her Red Pok Pok. She seduces him and gets him to marry her. Many problems ensue for the young couple, none of which really has anything to do with her being a ghost. For starters, they and the other tenants in their apartment building face eviction from a development company. To scare them off on demolition day, Ah Tsui pretends to be Yoda from Star Wars (!) and then transforms into Darth Vader and strips the construction crew's clothes off with a light saber (!!) After being fired from Shaw Brother Studios for refusing to do a dangerous stunt, Ma Su ends up getting a job as a driver for Johnny Tien (Dan Lau), the greedy and comically awful manager of the Puck Hik Real Estate Company. Because of his ineptitude and gambling issues, Johnny has run the company into the ground and takes it all out on his employees by being the boss from hell. He doesn't give his employees benefits, watches everyone on video monitors and fires people for the most ridiculous reasons imaginable, even leading one tired, overworked old man to hang himself in the bathroom. 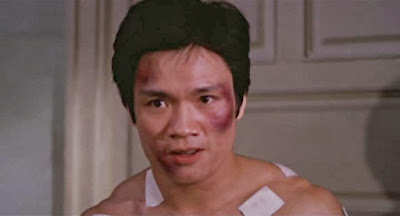 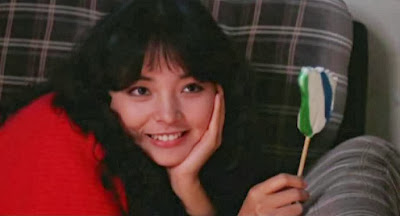 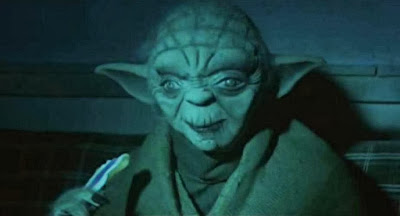 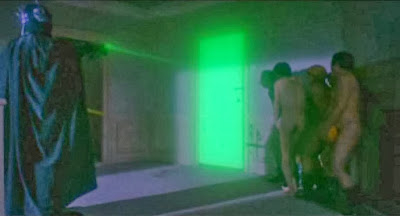 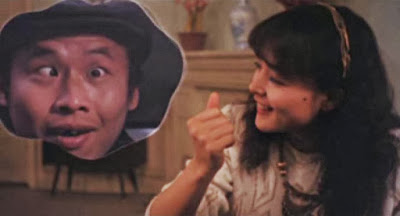 Johnny's having a hard time getting the locals to leave their homes so he can tear them down and begin construction on some high-priced hotels, so he hires a bumbling, cross-eyed arsonist (Yue Tau-Wan) to cause problems. Once Ah Tsing discovers what he's doing, she decides to use her supernatural powers for revenge. During one silly scene, she zaps the arsonist's clothes off, so he slips on a pair of pantyhose, is chased around by angry villagers, gets his ass burned with fire, slides down a hill in a bucket, gets piss accidentally thrown in his face and then has the Shaw Brothers logo branded onto his ass. Ah Tsing has it in for the evil Johnny even more, especially after he fires her hubby. She gets his secretary Lily (Lily Chen) fired, takes her place and then sets out to destroy the shady businessman. She can't type, but Johnny tells her that all she needs is a "nice buxom body" to be his secretary. Ah Tsing feigns interest in him and the two start going on dates. All the while she's actually setting him up to lose all his money during an auction. It all drives him crazy and he's sent away to a nuthouse. Despite receiving plenty of help from his new wife, Ma Su eventually realizes she's a ghost. His friend Big Beard takes him to see Master Lau Gia Lin; a sorcerer who teaches Ma Su about "Sun-Da;" a practice for invoking Gods to drive pesky spirits away. He calls up the spirit and manages to banish her, but begins to have second thoughts about doing so. 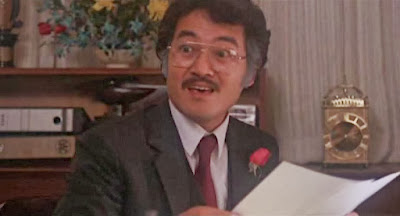 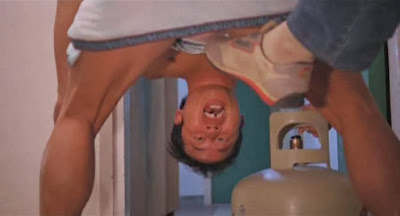 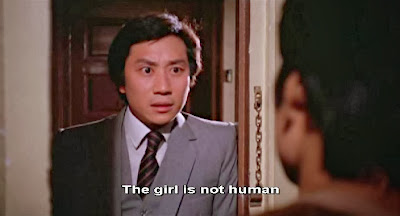 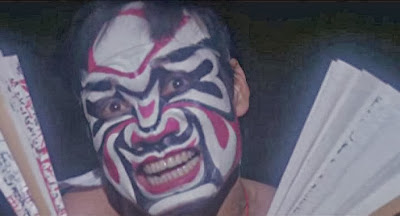 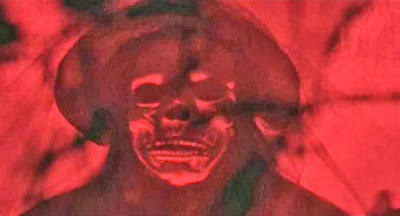 This mile-a-minute ghost comedy moves along at an insane pace, with little regard for pacing and continuity. There are many extremely irritating and over-the-top characters and gags miss the mark as often as not, but it's so freaking weird you can't keep your eyes away from the screen. Not just a crude comedy, Hex After Hex also seems to be trying to make a serious point about the infiltration of American culture into Chinese culture. Characters wear clothes with American labels, the English language seeps into the country's dialect and an American named "The Godfather" lives behind a gated home and burns petitions from the locals without even reading them. The finale is one of the absolute strangest you'll ever see in any film as a statue of Thomas Jefferson in the city square is brought to life by a rival sorcerer to do battle. It flips off the hero and then its jacket opens to reveal a slot machine and pieces of gold spew from its mouth. Wow. 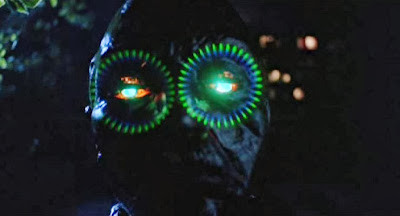 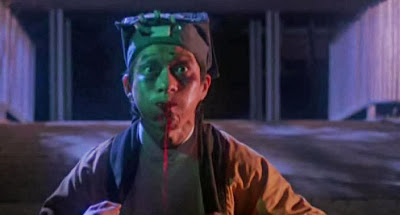 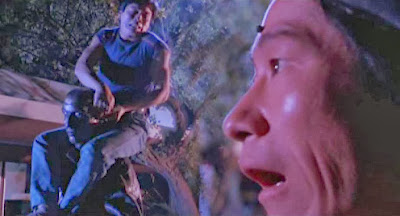 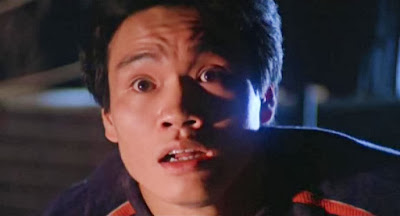 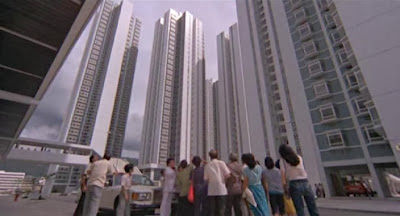