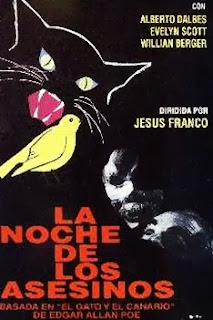 
On a dark and stormy night, wealthy Lord Archibald Percival Marion (Ángel Menéndez) is attacked by someone wearing a skull mask, who knocks him over the head, handcuffs his hands behind his back and then takes him into the backyard and buries him alive. His body is promptly discovered when the much-younger lady of the house, Cecilia (Maribel Hidalgo), returns home later that evening. Police Inspector Victor Bore (Vicente Roca) is called in to investigate. So who has a motive for murder? Well, Cecilia's been unfaithful to her husband, so there's always her. Then there's poor Rita Derian (Lina Romay), Archibald's grown illegitimate daughter, who bears the scars of years of abuse at the hands of her father and stepmother. Because she was conceived with a servant, her father never even allowed her to use the family surname, and naturally Cecilia detests her. Something's definitely off about the sinister, snoopy housekeeper Deborah Potts (Yelena Samarina), as well as her extremely neurotic and mentally imbalanced husband Rufus (Luis Barboo), who's also a servant in the home. And then there's the Lord's respectable, well-to-do cousin Simon Tobias (William Berger) and his wife Marta (Evelyne Scott). All of the above (including the inspector; a friend of the deceased) are named in the will and thus could be the murderer for that fact alone.

Major Oliver Brooks (top-billed Alberto Dalbés) from Scotland Yard is called in to aid Inspector Bore. The will is finally opened and it's revealed to actually be two wills: one if the Lord dies of natural causes and the other just in case he's been murdered. The one not being used is to be automatically destroyed, and we know which one that is. The will that's read leaves everything to Rita; justified by Lord Archibald that it's the least he could do for how poorly he's treated her over the years. Naturally, this doesn't go over too well with everyone else. Cecilia loses it and sneaks into Rita's bedroom later that night and whips her with a belt. Immediately afterward, the evil stepmom becomes Victim #2 when the killer knocks her out, takes her down to the ocean, ties her to some rocks and lets the "force of the wind" do her in. As if matters weren't already complicated enough, a third will surfaces that includes Archibald's cousin Albert Pagan (Daniel van Husen), his wife Mariu (Susan Swan) and a second illegitimate offspring; this time a son named Alfred (Antonio Mayans). Oh brother.

Because of the murders, none of those included in either of the wills are permitted to leave until the crimes are solved. More people are murdered and most seem to be in accordance to a book the Lord was fond of called "The Book of the Apocalypse." In it, a passage stating "Earth to bury us. Wind to scourge us. Water to drown us. Fire to burn us" dictates a few of the deaths. Someone's covered in gasoline and set ablaze and another is drown in a bathtub. Despite the presence of multiple officers staying in the house, the killer is able to come and go pretty much as he / she / they please. By the time all is said and done, there are a dozen suspects, eight murders committed by three different people and two different Lords of the estate (one's a "phony" Lord)! Some of the plot revelations are poorly delivered and cause confusion.

If this didn't have his name signed to it (and many of his usual stable of actors), one would be hard pressed guessing this was a Jess Franco movie. For starters, it's shot, scored and scripted in a very conventional manner. This is the rare Franco film that seems to have been made under strict producer supervision; one that relies on a narrative plot and one that has very few of the director's indulgences. It's also one of the only films of his from this entire decade that isn't soaked in sex and nude scenes. There are only a couple of flashes of nudity and they're all very brief. The violence is also minimal in this near-bloodless mystery. It's going to be unsatisfying to most of the director's diehard fans, as well as most exploitation fans.

Both the poster and the credits claim it was based on the novel 'The Cat and the Canary' by Edgar Allan Poe. 'Cat' was actually a play written by John Willard, and the film itself has next to nothing to do with either 'Cat' or anything Poe had written. In actuality, it's very much in tune with the writings of Edgar Wallace. From the ridiculously endless roster of suspects to the masked assailant to the quirky police inspector who almost leaves his sombrero behind everywhere he goes, this is very similar in both style and story structure to many of the German "krimi" produced in West Germany throughout the previous decade... Only it's not quite as good. 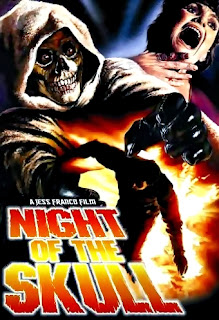 Franco (who also appears in a small comic role) filmed it back to back with Le manoir du Pendu ("The Hanged Man's Mansion"), which featured the same cast but was never completed. Skull didn't merit a VHS release in America, but later was distributed on DVD by Image. Though competent, it's bland and ultimately forgettable.