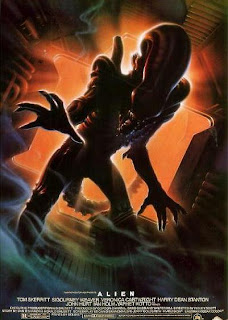 
Other than being one of the most influential and important horror / science fiction movies ever produced, Alien was also a box office smash hit (the sixth highest grosser of its year) that the stuffy Academy Awards couldn't even ignore (it was nominated for two Oscars and took home one for the impressive visual effects). A string of sequels (each progressively worse than the previous entry as it goes) and endless copycats haven't diminished its impact much either. Alien stills holds up incredibly well all these years later. Much like Carpenter's gory, effects-heavy take on THE THING (1982), this continues to impress younger viewers weaned on blockbuster sci-fi and fantasy extravaganzas and manages to pick up legions of new fans each and every year. A big reason for its staying power is the care and intricate detail that went into the art direction and production design. Time, place and the feeling of complete desolation are extremely well established. The future is coldly clinical in its steely and metallic, grey and blue, visage. Blending in all-too-well with the surroundings is another chief component to the film's enduring popularity; its titular menace: a tall, fanged, somewhat lanky - though sneaky and stealthy - acid-blooded fiend designed by H.R. Giger and brought to life by Nick Allder, Dennis Ayling, Brian Johnson and Carlo Rambaldi (all of whom won Oscars). Like the production design, this unique and threatening presentation of alien life helped to elevate the sub-genre and instantly set the film apart.

While traveling through space, the seven-member crew of the freight ship Nostromo receive a faint S.O.S. call from a nearby planet. There they find a crashed spaceship and, inside of it, some unusual and rather large pods. When one of the pods erupts, Kane (John Hurt) is the unlucky recipient of a parasitic lizard-like creature that attaches to his face and won't loosen its grip around his neck. He's brought back aboard for further investigation and the ship takes off. Eventually, the creature lets go and Kane emerges from the ordeal seemingly unharmed. That is until everyone's eating dinner and he suddenly starts having some major indigestion issues. The parasite wasn't just there for a free ride, it had actually implanted an alien embryo into a host body. After Kane's chest erupts, a tiny alien creature pops out and manages to run off. This creature won't be little for much longer however: it grows at a rapid and alarming rate into a large, ruthless creature whose only clear objective is to kill. Now trapped on the ship with nowhere else to run, the survivors are thrust into a kill-or-be-killed scenario with the unwanted stowaway.

Though executed with far more skill on a much higher budget, Alien still owes a certain debt of gratitude to Edward L. Cahn's set-bound low-budget 'B' picture IT! THE TERROR FROM BEYOND SPACE (1958). It! not only featured an almost-unstoppable alien creature aboard a traveling spaceship, but also had a subplot involving an alien "bacteria" that causes stomach cramps and had a tense scene of an astronaut crawling through the ventilation shafts and suddenly encountering the creature (repeated - and one of the key jump-outta-your-seat moments - in Alien). Both films also make use of an air lock system during the finale. There are enough obvious similarities between the two films to draw the conclusion that script-writer Dan O'Bannon (who'd later direct the excellent horror-comedy THE RETURN OF THE LIVING DEAD) was indeed influenced by Jerome Bixby's It! script.

Top-billed Tom Skerritt plays Dallas, the ship's captain, Ian Holm is Ash, a science officer who has a major secret of his own, and grown-up former child actress Veronica Cartwright (from Hitchcock's THE BIRDS) and veteran character actors Yaphet Kotto and Harry Dean Stanton help to round out the crew. It was, however, relative newcomer Sigourney Weaver (as warrant officer Ripley) who'd emerge as the film's breakout star; not to mention sole survivor. Well, unless you count Jonesy the cat. Some found it novel that Weaver was not only smart, resilient and strong, but also not required to be in any kind of romantic scenes with her male co-stars.

Alien has never been out of circulation since its initial release. It's always been easy to find, easy to see and is one of the best-distributed and most popular titles on this blog. There have been numerous cuts and re-issues of the film over the years, including ones featuring footage cut from the original theatrical release version. Ridley Scott was less commercially successful with his next venture into sci-fi territory; 1982's Blade Runner didn't fare too well with critics or audiences upon release. Since then it's picked up a huge following; numerous critics who initially trashed it ate their words and many have issued new (and glowingly positive) reviews for the film since.

The string of sequels began strongly with ALIENS (1986), the hit follow-up from James Cameron. Though it concentrated more on loud action set-pieces than the chilly, claustrophobic, scary mood established in the original film, it improved upon its predecessor in other ways; namely by effectively elaborating on the Ripley persona; turning her into a more three-dimensional heroine audiences enjoyed cheering on. Weaver was even recognized with an extremely rare (for a genre film) Best Actress Oscar nomination for it. Weaver was back again in Alien 3 (1992), David Fincher's grim, dreary third chapter, and again in even less interesting Alien: Resurrection (1997). Weaver bowed out after and diminishing returns on the saga meant they'd have to do something slightly different; mix two franchises into one. AVP: Alien vs. Predator (2004) and AVPR: Aliens vs. Predator: Requiem (2007) were the resulting films and few were pleased with the results. Scott himself returned to try to breathe new life into the series with a (sort of) prequel: Prometheus (2012).