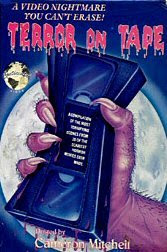 Directed by:
Robert A. Worms III
Cameron Mitchell (with a gray afro, dark eye shadow and pale face paint) is Shoppe, the owner of a video store specializing in shock. His first customer is a nerd suffering from hypertension who's wanting to rent a fine family film, but is shown clips from a series of horrors instead. By the way, all of the films covered in this compilation tape were once distributed by the company Continental Video. Footage from RETURN OF THE ALIENS: DEADLY SPAWN (1983), VAMPIRE HOOKERS (1979), BLOOD TIDE (1980), CATHY'S CURSE (1977), MADHOUSE MANSION (1974), FROZEN SCREAM (1980), TO THE DEVIL A DAUGHTER (1976) and EERIE MIDNIGHT HORROR SHOW (1974) end up turning the nerd's hair gray and send him away in anger. His second customer is a construction worker wanting zombies. Instead, he's shown clips from KIDNAPPING OF THE PRESIDENT (!), the slasher NIGHTMARE (1981) and, finally a zombie film (sorta); CITY OF THE WALKING DEAD (1980). When the guy wants a movie with hot ladies, Mitchell jokes about something called "Attack of the 50 Foot Mammaries" and then shows some topless scenes from a couple of movies already covered. This leads into THE SLAYER (1982), ALIEN PREY (1977) and the H.G. Lewis classics TWO-THOUSAND MANIACS (1964) and COLOR ME BLOOD RED (1964).
.
Shoppe talks to a skull he claims is his mother and a rubber Spider named Herman before trying to shut down for the night. The clock strikes midnight and in wanders a sexy woman (played by Scream Queen Michelle Bauer; really camping it up here) through the fog. She claims she's never been scared in her life and wants extreme horror that will put her over the edge. A barrage of gory clips from the films we've already seen (plus BLOOD FEAST) do the trick. And that's about all she wrote folks! It's usually listed with a 1985 production date (which is what it says on the end credits), but this may have actually been filmed as early as 1983.
★★
Posted by The Bloody Pit of Horror at 11:38 PM