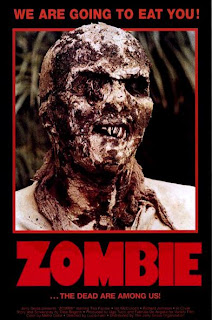 In 1978, George A. Romero revolutionized horror cinema with his trend-setting classic DAWN OF THE DEAD. Filmed on a modest budget independently in Pennsylvania, the movie combined solid direction, sophisticated storytelling and until-then unseen levels of gore to become a huge international hit, despite the fact it played theaters with a self-applied X-rating. It also pulled off the impossible by getting positive [and most certainly deserved] critical notices across the board, even from the majority of critics reputed to have a strong distaste for the genre. So it's not surprising that many other filmmakers across the globe tried to cash-in, particularly in Europe. This Italian effort by Lucio Fulci was one of the first to do so and went on to become one of the most famous of all the copycats, possibly because it was released overseas as an actual sequel to Romero's film; Dawn was titled Zombi, Zombie was titled Zombi 2. Though the films share the slow, shambling, flesh-eating resurrected dead and high levels of gore (plus snippets of the same score), the similarities pretty much end there. Absent are Romero's sharp satire and humor, his relatable and enjoyable characterizations, the sweeping, increasingly hopeless apocalyptic tone and the deftly-directed action and horror sequences. Fulci's film is a dirtier, grittier, more primitive affair, which drops anything substantive and gets right down to basics. 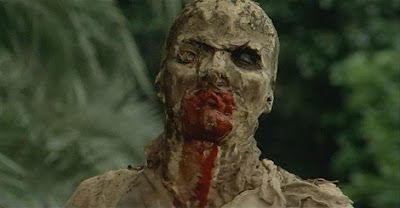 The film opens as a seemingly unoccupied little boat washes into New York Harbor. When a couple of police officers go to investigate, they're promptly attacked by a zombie, who rips one of their throats open before being shot and falling into the water. Anne (Tisa Farrow) becomes concerned because the boat came from the same desolate tropical island her scientist father (whom she's lost contact with) is doing research. She, along with reporter Peter (Ian McCulloch) decide to head to the island to investigate. They charter a boat from Brian (Al Cliver) and his girlfriend Susan (Auretta Gay) and before the four even arrive at their destination, they're already being attacked by zombies. During one of the film's most memorable scenes, while Susan's deep underwater scuba diving, she comes face to face with a flesh-eater. Thankfully, the attack is thwarted by a shark that rips the zombie's arm off! Our heroes finally arrive at the island and act like complete dunderheads while the living dead start popping up all over the place. We're also introduced to some more thinly-defined fodder along the way, including Richard Johnson as the mad doctor type responsible for creating the zombie plague, Olga Karlatos (who'd star in Fulci's MURDEROCK a few years later) as his hysterical wife, Stefania D'Amario (NIGHTMARE CITY) as a nurse and Dakar (ZOMBIE HOLOCAUST) as an island native.

Though no match for the Romero zombie film responsible for its very existence, this isn't without its own redeeming qualities. For starters, some of the zombie designs are really good, including the maggot-faced chap who winded up on the poster. The film is also filled with gore, including a now-famous bit where Karlatos gets her eyeball skewered in close-up by a jagged piece of wood. Flesh chewed out of necks, arms and legs spray blood all over the place, and there are heads being shot, a dismemberment, guts and more. The island is a nice setting for one of these things, the low-budget look of the film is also something of an accidental plus that contributes to the film's grimy atmosphere and there's an excellent score from Goblin. On the down side, the script is pretty awful; there's next to no plot, the dialogue is terrible and there are no characters to root for or care about. In fact, they all pretty much behave like morons the entire time, including standing around for minutes at a time watching zombie accumulate around them.

The film was co-written by the prolific Dardano Sacchetti, who had his name removed from the credits after his father passed away (he found it a little distasteful to have his name attached to a living dead flick at the time). 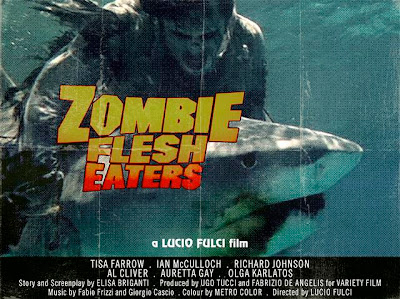 Because of Zombie's success in theaters, Fulci would continue mining the zombie well for the rest of his career (sometimes adding supernatural slants to the stories) with such releases as THE GATES OF HELL (1980), THE BEYOND (1981) and THE HOUSE BY THE CEMETERY (1981). Just as Zombie had been re-tited Zombi 2 in Europe, other unrelated films were re-titled for home video to create a bogus "zombie" series. The title ZOMBIE 3 was used for a troubled production partially directed by Fulci in 1987 (Review RIGHT HERE), the sleazy BURIAL GROUND (1980) and at least three (!) other films. There are at least three different movies which have used the title ZOMBIE 4 (including THIS ONE). Jess Franco's REVENGE IN THE HOUSE OF USHER (1979 aka Nervosus) was released as ZOMBIE 5 (but so was a 1987 film originally called THE KILLING BIRDS) and Joe D'Amato's MONSTER HUNTER (a follow up to his ANTHROPOPHAGOUS aka THE GRIM REAPER) was issued on VHS as ZOMBIE 6 at one point. It's just as confusing as the "Demons" series.

hey thanks for the visits and comments. I gotta read this later, I am about to go to bed finally.

You have a cool site and look. Maybe would cooler with some "flashy" layout but you can get that stuff later, main thing is good content and that is what you've got going now. Fluff it up later if you feel like it.

I'll check up here when I see an update in my sidebar... good luck.