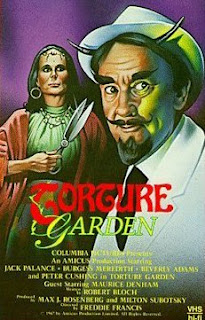 Amicus' second of eight horror anthology features, following the box office success of DR. TERROR'S HOUSE OF HORRORS (1965), is the weakest of the bunch. And that's rather unfortunate since this one boasts portmanteau specialist Freddie Francis at the helm, Robert (PSYCHO) Bloch in charge of adapting his own short stories and such big names as Burgess Meredith, Jack Palance and Peter Cushing rounding out the cast. At a carnival, feisty Dr. Diablo (Meredith) shows off his "Torture Garden" horror exhibit to paying customers and as a special treat allows five patrons to come into a back room to have their futures predicted by a statue of the goddess Atropos (Clytie Jessup - seemingly having a difficult time staying still!), who holds "the shears of fate." We then get four terror tales, two that are decent (though really nothing spectacular) and two that are rather weak.
In "Enoch," greedy Colin Williams (Michael Bryant) discovers he's the sole heir of his terminally ill Uncle Roger's (Maurice Denham) estate. Before Colin can discover where his estranged relative's never-ending surplus of gold coins is coming from, his uncle passes on. Colin then searches the mansion, finds a secret hatch under a bed leading to an underground crypt and digs up a coffin. Inside are a skeleton and still-living cat. The cat turns out to be an evil witch's familiar who can provide wealth in exchange for being fed human flesh! Next up in "Terror Over Hollywood," unscrupulous, fame-hungry starlet Carla Hayes (Beverly Adams) will do anything to make it in the movies. She ends up getting her big break (or so she thinks) after being cast in a lead role opposite timeless superstar Bruce Benton (Robert Hutton) but then discovers top Hollywood players are being replaced by synthetic doubles. I suppose that explains this segment's robotic acting. Tale #3 (the silliest of the bunch) is called "Mr. Steinway" and finds Dorothy Endicott (Barbara Ewing) falling in love with pianist Leo (John Standing), only to discover his prized piano is haunted by the spirit of his domineering late mother.
The final segment - "The Man Who Collected Poe" - will probably provide the most interest to horror fans. It stars Palance as abrasive and obsessive Edgar Allan Poe enthusiast Ronald Wyatt, who meets his match when he comes across wealthy Poe collector Lancelot Canning (Cushing). Canning reluctantly allows Wyatt to accompany him back to his home to show him part of his extensive collection of Poe memorabilia, including some unpublished manuscripts. Wyatt gets a little pushy and violent; eventually finding out that one particular piece of the collection sets it part from any other. This tale, along with the first one, make this uneven anthology worth a look. The wraparound segments (also featuring Michael Ripper as a customer who doesn't seem to want his future foretold) and production values are adequate.
★★
Posted by The Bloody Pit of Horror at 11:59 PM