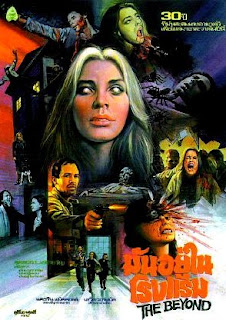 ...aka: Aldilà, L'
...aka: And You Will Live in Terror
...aka: Beyond, The
...aka: Seven Doors of Death
Directed by:
Lucio Fulci
An artist (Antoine Saint-John) is attacked by a mob, who brutally chain whip, crucify and melt away his face with acid, in the monochrome pre-credit period sequence. Many years later, Liza (Catriona MacColl, who also starred in THE GATES OF HELL and THE HOUSE BY THE CEMETERY from the same director) inherits the same cursed Louisiana mansion/hotel and moves in there with renovation crew in tow. A rash of unexplained, supernatural events and mysterious, gory murders soon follow, and anyone who investigates the strange goings-on at the home face an appropriately gruesome demise. The home turns out to be housing one of the seven ancient gateways to hell, which is located somewhere in the flooded basement. A scary-looking ghoul keeps popping up all over the place, a plumber (Giovani De Nava) gets his eyeball squashed out by a zombie and the maid (Veronica Lazar) gets her head impaled on a spike. In a morgue, acid melts away a face and more zombies show up. A man is attacked by tarantulas in a library, who bite at his eyeball, nose and lips in close-up. There's also a mysterious blind-woman ("Sarah Keller"/Cinzia Monreale) with white eyes who keeps showing up warning of doom. Italian horror regular David Warbeck co-stars as a doctor who helps Liza try to figure out what's going on, and Al Cliver has a smaller role as another doctor.

Anyone familiar with the films of Fulci pretty much know what to expect here. There's little plot, a decent amount of atmosphere and grisly gore fx showcased in lengthy, graphic murder set-pieces. The pacing never seems quite right, though, and the film seems to drag in between the outbursts of gore. However, the storyline holds a little interest, the movie is surprisingly surreal at times and the ending is enjoyably ambiguous, so it's easy to see why this is one of the director's most acclaimed works.

Quentin Tarantino is a big fan of the film and, in association with his Rolling Thunder Pictures, prompted a limited theatrical re-release about ten years back, then a video reissue of the uncut version with an additional 10 minutes of (mostly) gore restored came. The cast and crew credits for the original Aquarius video release (as SEVEN DOORS OF DEATH) are mostly incorrect. To be perfectly honest, though, in some ways I prefer the shorted SDOD cut of the film to the longer cut. Sure that version was hacked to death and is missing some of the gore but it also moved along quicker and trimmed out some of the boring talky sequences that are basically redundant and do nothing for the film aside from bringing it to a screeching halt. And for some reason, I much prefer Seven Door's score to the one by Fabio Frizzi that's used in the original version.
★★1/2
Posted by The Bloody Pit of Horror at 7:42 AM

Great review! I remember seeing this in the '80's and it was kind of a mess. The restored dvd is great!