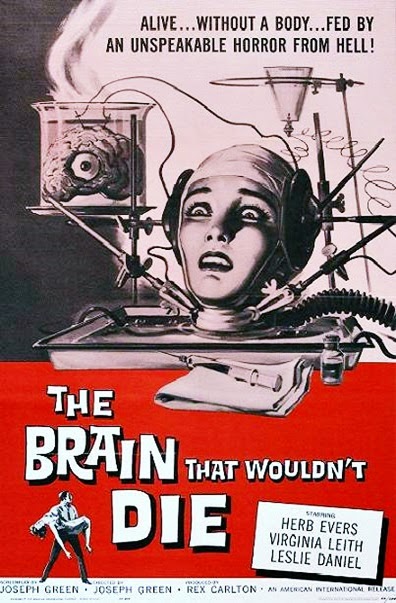 
Filmed in Tarrytown, New York, this trash classic from the swingin' 60s (well, it was actually filmed in 1959, but not released until 1962) is sure to amuse and delight any fan of Z-cinema. Jason ‘Herb’ Evers stars as mad doctor Bill Cortner, who’s been stealing limbs from amputee victims at a hospital to further his experiments. On the way to Bill’s country home and lab, his bad driving leads to a crash that decapitates his lovely fiancé Jan (Virginia Leith). He scoops up the head and continues to the lab where he manages to rejuvenate Jan’s brain using some special serum that he usually uses to fuse together body parts. The result is a cackling, severed noggin that sits in a lab tray hooked up to a couple of tubes, giggles insanely, whines, broods, cries and develops some kind of weird psychic link to a hideous cone head monster (7'8" former wrestler Eddie Carmel) the doctor keeps locked up in a broom closet. Dr. Bill’s tortured, harried assistant Kurt (Leslie Daniel) has a withered arm, continually paces around the lab and ends up having to deal with most of these problems. One of the funniest parts is when he puts tape over the head’s mouth to shut it up!

Meanwhile, Evers plots to find the appropriate new body for Jan and gets an eye-full (his lascivious lip-chewing look-overs are comic gold) when he attends a strip club (where a cat-fight breaks out backstage), a “Miss Body Beautiful” contest and an artist’s modeling session. He finally decides on Doris (Adele Lamont), a man-hating, facially-scarred figure model. He lures her back to his home, but the monster suddenly busts out of closet and attacks! I won’t spoil the ending, but the beast ends up ripping off an arm, biting a chuck out someone and spitting it out on the floor and basically making a complete bloody mess out of the lab. Great stuff! Don't miss it!

Avoid any version released by Warner Brothers because they are missing most of the violence (and run only 70 minutes). Other prints, such as the ones released by Chiller and Rhino, are the uncut, 82-minute version you want to see. Some sources claim a 92-minute cut is around too, but I doubt that. 1959 Playboy Playmate Marilyn Hanold (who had a better role in FRANKENSTEIN MEETS THE SPACE MONSTER a few years later) and an uncredited Sammy Petrillo (BELA LUGOSI MEETS A BROOKLYN GORILLA) also appear.