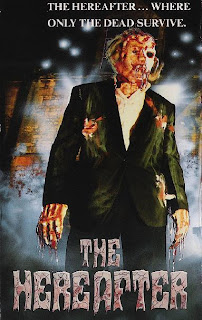 ...aka: Qualen
Directed by:
Michael J. Murphy
Here's another film so rare that IMDb doesn't even bother listing it. As a matter of fact, of director Michael J. Murphy's 25 films (many of which are horror and have been released), only two (1982's INVITATION TO HELL and 1983's THE LAST NIGHT) are currently in their database. Murphy claims (in this interview) that the producer could only sell this particular title in Spain, where it was released under the title QUALEN (whatever that means) and dubbed into Spanish. I guess neither he nor his interviewer were aware of it at the time, but this movie was also released here in the U.S. in 1987 under the title THE HEREAFTER. The company who distributed it on VHS, Mogul Communications (who specialized mostly in obscure foreign films - see list below), even put it in a very nice, eye-catching box that has attracted attention from genre fans, particularly zombie movie fans. Well, don't get your hopes up too high, buckos. I couldn't imagine too many people (let alone those looking for some living dead action) being impressed with they'll see here.
.
Neville (Steven Longhurst) is saddled with a drunken old crank of a crippled father. Dad (who is rich) also doesn't seem to think much of his son's new girlfriend Vicky (Catherine Rowlands), who he refers to as "that hairdresser slut." During an argument, Neville leaves his dad sitting atop a rocky embankment. He forgets to put the emergency brake on the wheelchair, which promptly rolls down a hill and throws pops out into a lake, where he drowns. Soon after, Neville and Vicky get married and settle into the mansion. He relates a flashback to the home's troubled history. Many years earlier, Neville's great great uncle fell in love with a poor village girl with a bad reputation. The young man's father frowned upon the union to the point where he arranged for the girl to get gang raped and murdered. His son then killed himself by leaping from his bedroom window.
.
The film then settles into a tired 'let's drive the rich person crazy to get their money' storyline, with a slight touch of the supernatural. A skull-faced zombie (the thing pictured on the box) turns up long enough to knock Neville out of a window. He ends up surviving the fall, is stuck in a wheelchair and soon discovers his new wife has been plotting against him with her lover, hunky gardener Patrick (David Slater), to get their hand on a million pounds Neville inherited. Vicky and Patrick even go so far as to getting it on in the house while Neville tries to recooperate from his injuries. They also begin to get suspicious about the female writer named Dorothy (Wendy Young) who lives next door, so Vicky sinks a pick axe into her face while she's trying to ride away on her bicycle! Eventually ghosts (whose, I'm not so sure) turn up to help settle the score.
.
Is the fact an already unknown director decided to use a pseudonym ("Michael Melsack") a bad sign? In this case, yep. The acting, lighting, sound, editing and camerawork (note the shot where the camera pans down then has to abruptly jerk over to capture a woman on the phone) are all pretty amateurish. The zombie on the box is only featured briefly and it turns out to be a hoax. The "haunting" portion is limited to a rocking horse moving and lights flickering. There are a couple of laughably choreographed fight scenes, a tiny bit of blood (the aforementioned bicycle murder and an arm smashed in a bear trap) and a couple of timid sex scenes where the nudity is concealed (or has been cut). Mostly though, this is just talk, with very stiff actors reciting very bland dialogue in service of a slow-moving, cliche-ridden, predictable plot. Not really worth the search.
.
The other releases from the Mogul VHS catalogue include FEAST OF SATAN (1971), AUTOPSY (1973), HAVE A NICE WEEKEND (1975), SCHOOL OF DEATH (1975), RAPE (1976), WEREWOLF WOMAN (1976), THE BEAST IN HEAT (1977; as SS Experiment Camp 2), SATAN'S BLOOD (1978; as Don't Panic), FROZEN TERROR (1980; as Macabro), THE ICEBOX MURDERS (1981), THE CURSE OF THE SCREAMING DEAD (1982), DON'T LOOK IN THE ATTIC (1982), HORROR SAFARI (1982; as Invaders of the Lost Gold), SATAN'S BLADE (1984), DEMON QUEEN (1986) and GREEN INFERNO (1988). While some of those have been picked up for DVD distribution by other companies, others (including this one) have sunk into obscurity over the years.
.
★1/2
Posted by The Bloody Pit of Horror at 9:03 PM

Wow! This a rare find even if it sucks! I've heard of a lot of those titles released by Mogul and actually I have seen a couple of them!

This was a great "investigative" review!

Thanks! I'll be on the lookout for some of this guy's other films but they're pretty hard to come by.

there is a page on imdb of the hereafter.it was put up sometime last year by somebody

Ah, OK. Apparently the director has made a lot more than what's currently listed for him on there. I 'm aware of at least two more that are still not on IMDb: Death Run and Bloodstream. Guess most of his were just barely released.