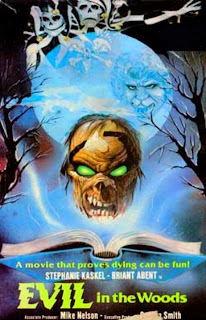 A little boy (Brian Abent) goes to the library and snatches a copy of an ancient-looking book titled "Evil in the Woods." He returns home, hops in bed and starts reading the "fractured fable" found inside, which is then visualized for us. It's narrated by someone with a cheesy and highly annoying country fried goofball accent and for some reason redundant title cards have been inserted every once in awhile, probably less to keep viewers informed of what's going on than to help with the consistently poor continuity. Somewhere near Mildew, Georgia in 1956 a man is attacked by something from the sky. The film then hops to present day Atlanta and we're on the set of "Bigfoot vs. the Space Monsters." The cast and production crew promptly travel to Mildew, where a big foot-like creature is roaming the woods and a tinfoil spaceship with a couple of alien midgets lands. All that turns out to be just a movie.

Meanwhile, a camping family from the big city lose their little son Billy (played by the same kid reading the book), who ends up getting dismembered (off screen) by an old backwoods witch named Ida Pierson (Stephanie Kaskel). Ida has about half-a dozen retarded fully-grown children (bi-products of incest, naturally) who roam around in the woods, kidnap the crew members, take them back to their home, torture and dismember them and then eat them. Ida makes herself young and beautiful with a magic potion and eventually turns her clan into mutant monsters with the help of voodoo dolls. The missing little boy's parents go to the sheriff for help, little knowing he's actually romantically involved with the witch. The cast and crew of the movie hang out, bicker, drink and do drugs before getting killed.

I've heard both good and bad things about this rare low-budgeter, but I'm mostly siding with the bad camp. The (over)acting, dialogue, editing and production values are all pretty dire, attempts at humor are labored and unfunny, the narration is extremely irritating and never seems to end and the whole mess is sloppy, juvenile, slapdash and lacks focus. On the plus side, some of the music is actually pretty good (except for a song that attempts to rhyme "tequila" with "squeeze-a"), there's some OK aerial photography and the last half hour is much better than what precedes it (which is pretty much unwatchable). Most of the cheap gore is also saved for the end. We get an exploding head, guts ripped out, brains removed, etc. Too little, too late. It ends with a shot of an Iron Maiden poster and a page of the book that says "Please watch for other fractured fables by Fantasy Factory." Guess that never happened.