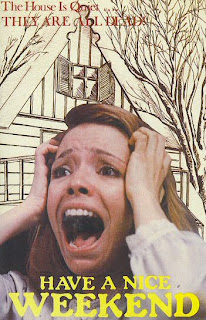 I've got some good news and some bad news. The good news is that your son has returned safely from Vietnam. The bad news? He's psycho and wants to kill everyone! Young Chris Gilbert was an army lieutenant who's been released from active duty, suffers from 'Nam flashbacks (shown via still photos), burns his fatigues as soon as he arrives at the airport and gets in touch with each of his well-to-do family members and tells everyone he wants to get together for a reunion. Instead of meeting at home, he decides to arrange for everyone to meet at the family's island summer home, which can only be accessed by boat. The patriarch of the clan, wealthy NYC businessman Paul (Michael B. Miller), is a perfectionist who may have pushed his kids a little too hard to be successful when they were younger and likes to lovingly stroke kitchen utensils and reflect about his favorite childhood knife, the "buck." Mom Laura (Nikki Counselman) seems to have little on her mind other than the arrangement of her rose bushes. And daughter Muffy (Patricia Joyce) is just your standard teen college student who has the hots for Frank (Arthur Roberts), an older part time pee wee football coach who also works part time as a gardener on the island. They, along with Muffy's snobby college friend Ellen Sherman (Colette Bablon) and a bickering couple; Joan (Valerie Shepherd) and Donald (Peter Dompe) Kraft, who also live on the island, are then picked off one by one. Well, at least a couple of them are... After Frank is slashed to death with a kitchen knife, Chris starts hilariously barking out military orders to everyone and forces them all to split up and comb the island for signs of the killer.
.
But then... (red herring alert! red herring alert!) the rug's pulled out from under us as someone sneaks up behind poor troubled Chris and whacks him over the head a few times with a hoe. So Chris isn't actually the killer. You know, cause he's dead. And now we go into a ridiculous series of mini-flashbacks trying to establish the remaining characters as possible suspects. Dad has a thing for sharp knives and was seeing a shrink at one point. Mom was having a secret affair with the gardener. The daughter viciously clawed her friend's face when she found out she went on a date with a guy she liked. The neighbor lady is a gossipy flirt whose actions make her hubby insanely jealous. And the roommate's brother apparently was a nutjob himself, so maybe nuttiness runs in their family. Then there's always the possibility that it's just an anonymous psycho who has crashed their party. Oh brother.
.
On the plus side, the cinematography isn't bad. It's set in the Fall, with autumnal colors on the trees and nice soft-focus shots of wind blowing the leaves and of the lake. On the down side is, well, basically everything else! The classical music score loop will grate on your last nerve. The cast ranges from average to awful, but it's hard to blame anyone for giving a bad performance since the film has some of the worst-written and most awkward-sounding dialogue you'll ever hear. Nothing even remotely scary happens, there's zero suspense, no cheap thrills and the murder scenes themselves are extremely weak and badly edited. For what is essentially a "proto slasher" flick, all of those elements being poorly pulled off render the film virtually pointless. There is also a silly "epilogue" with a doctor explaining the killer's motive to one of the survivors that was obviously just tacked-on just to push the run-time up to measly 75 minutes.
.
The VHS release was from All-American Video, and since it wasn't that well-distributed in the first place, the film has sunk into a much-deserved obscurity over the years. Slasher fans are the only ones I could see actively seeking out this title, and I can almost guarantee, even by their low standards, that the majority will be disappointed by what they see here. The version I saw had no end credits.
.
★
Posted by The Bloody Pit of Horror at 12:53 AM