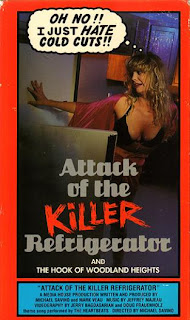 It was made by media students at Worcester State College in Massachusetts. It was shot-on-video in 1984 with a budget of just 25 dollars. It miraculously managed to get a VHS release in 1990 from Donna Michelle Productions. One might refer to it as amateur hour... except it only runs 15 minutes. So what can you expect here? Nonexistent production values, bad acting, bad effects, bad picture quality, bad editing and a bad music score with a cute premise, a little no budget charm and an attention-getting title. Things begin with a bunch of people having a party. One guy goes into flashback mode and we learn how the poor refrigerator's freezer section got some unwanted ice beat off with a hammer. So now it's pissed off. Steaming mad, you could say. The party clears out, leaving just two guys and their girlfriends. One by one they're killed off. The first victim has her hand chopped off when the door slams on it. A guy gets bashed against a wall. Another is stabbed with a door handle and the final chick gets smashed with the door. It also eats a cat. A girl comes over and cries over a dead body. The end.
.
Strangely, the on-screen title calls our killer appliance a "refridgerator." I'm not sure if that was intentional or not. Even stranger, this isn't even the only killer fridge movie. Just one year after this made its way to videoland (where it was paired with the same filmmakers' THE HOOK OF WOODLAND HEIGHTS), the feature length film horror-comedy THE REFRIGERATOR (1991) was released. If interested, you can purchase Refrigerator, Woodland Heights and another short called DAYS BEFORE CHRISTMAS from the same folks (director/writer/producer Savino and writer/producer Mark Veau) from their website Media House Films.
★1/2
Posted by The Bloody Pit of Horror at 2:44 AM