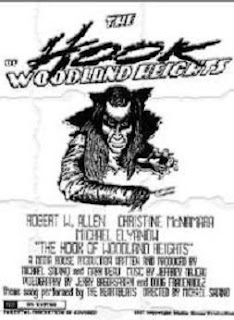 The guys behind the 15-minute short ATTACK OF THE KILLER REFRI(D)GERATOR (1984) are back with this 40-minute, shot-on-video slasher, which was first released in 1990 on VHS by Donna Michelle Productions (who put Refrigerator on the same tape for a double feature that's actually shorter than most standard features). Hook is a silly, over-the-top play on the 'hook-handed killer haunting lover's lane' urban legend, but it's better-made, better acted and better photographed than their first effort. We're first introduced to teenager Tommy (Michael Elyanow), who picks up his date Katie (Christine McNamara) and hopes to score with her out in the sticks. The film then cuts to a mental hospital where a bunch of cliched nutters roam the halls except for a maniacal, one-handed serial killer named Mason Crane (Robert W. Allen) who is kept locked away in solitary. Mason manages to kill two orderlies in charge of moving him (one is smashed in the door and the other is killed when a clipboard is thrown at his head!) and then escapes.

Mason immediately heads into the woods, kills a dog and then finds a two-pronged barbeque / grill fork lying on the ground and jams it into his arm stump. He then kills a young boy playing hide-and-seek in a graveyard, another guy and finally makes his way to Tommy and Katie, who are too busy making out to pay much attention to the radio news broadcasts warning of the psychos escape. There's some POV camerawork trailing through the woods, a couple of good songs (the theme is called "Hooked on You") and even a crotch stabbing. On the down side, the make-up job on the killer (overdone white face and black eye grease paint) is pretty awful. Most of the acting is mediocre or bad, but Allen is memorably over-the-top as the psycho. He laughs maniacally, breathes heavy, grunts and acts like a mix between a gorilla, a rabid dog and, well, a hyperactive, raving loony.

So nothing great, but mildly entertaining. The short run-time keeps it from wearing out its welcome with unneeded filler and it's a slight step up from their previous effort. Slasher fans will probably want to see it because it's one of the rarest titles in the subgenre, though if you have 25 extra bucks to throw away, you can order it from the director's website.