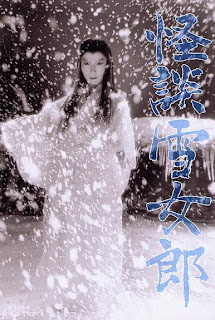 Yuki-onna is a female spirit in Japanese folklore, often described as a tall, pale-skinned woman with long black hair who appears only during snow storms, dresses in a long white gown, has uncommon beauty and possesses the ability to freeze anyone who threatens to either harm her or expose her once she takes on human form. Not only a common presence in Japanese literature, anime and manga, Yuki-onna also had an entire opera based on her (that was around as early as 1911) and appeared in that famous Snow Woman segment in the Oscar-nominated ghost anthology KWAIDAN (1964). Here's another chance to see the same character in action in a more bloated form (well, just 75 minutes) and, quite frankly, I'd take the KWAIDAN version any day over this one. Not that this is a bad movie. It's actually a pretty good one when it comes to cinematography, art direction, performance and direction. Unfortunately, the middle portion has a tendency to drag, and where it drags to will be predictable to even those who know nothing of the Yuki-onna legend.
An elder sculptor and his young apprentice Yosaku (Akira Ishihama) locate a sacred tree in the snowy forest with plans on cutting it down, returning it to their village and making a statue of the Goddess Cannon out of it. Stranded by a blizzard, they decide to take refuge in an abandoned shack and wait out the storm. While sleeping, a ghostly, floating woman (Shiho Fujimura) arrives in a flurry of snow. She puts out their fire, freezes the sculptor to death and then promises to spare Yosaku under the condition that he never utter a single word about the night to anyone as long as he lives. He agrees and she goes on her way. Yosaku returns to his village and the home he shares with the sculptor's frail wife and is given permission to create the statue himself. A mysterious woman named Yuki (Fujimura again), who claims to be the daughter of doctors, shows up during a rainstorm, Almost as quickly as they meet, and because of a deathbed wish from the sculptor's wife, Yuki and Yosaku marry. Five years later (which is also how long the wood takes to petrify so the statue can be made) the couple even have their own son.
As is typical of films from this era and from this country, there's high-level corruption in the village as a brutish and sadistic bailiff (who has no issue beating elderly women and children) lusts for the beautiful Yuki and will stop at nothing - including exploiting his social standing - to get her. There's blackmail, attempted rape and eventually revenge enacted by Yuki as her - ahem - icy side comes forward. There's some spooky stuff at the very beginning and a little spooky stuff at the very end, but the entire middle portion plays out as romantic tragedy and the complications faced by our ill-fated love birds aren't really all that interesting.
Some of the shots are lovely to look at, the effects are very well-done for the time and the two leads are excellent. So while it's admittedly a 'well-made film' it's also a 'well-made film that has already been done better elsewhere with less filler.' Which begs the question: What exactly is the point?
★★1/2
Posted by The Bloody Pit of Horror at 10:26 PM