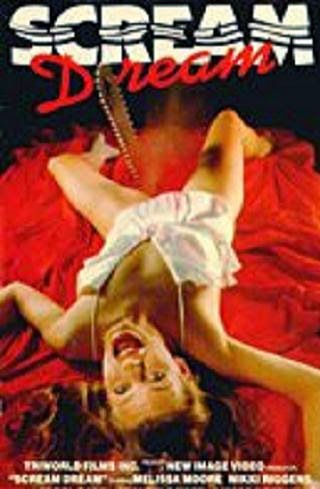 Like most of Farmer's output, this is very cheap, very badly made, full of continuity errors, padded out with whatever will stretch the running time to about an hour and has terrible amateurish acting. However, it's slightly better than his two previous efforts (the seemingly-unfinished DEMON QUEEN and the enticingly-titled though nearly insufferable CANNIBAL HOOKERS) thanks primarily to second tier 'B' queen Melissa Moore, from Versailles, Kentucky. Though Moore (a blonde, six-foot-tall model) never quite reached the height of fame as some of her Scream Queen sisters, she was one of the most beautiful in her category, a decent actress and had a pretty good ten year run lasting from the late eighties until about the mid-90s, racking up credits in numerous low-budget horror films such as Jim Wynorski's Sorority House Massacre II and HARD TO DIE (both 1990), Vampire Cop (1990; Farmer again), the horror spoof REPOSSESSED (1990) and Mad at the Moon (1992; an arty horror western for director Martin Donovan), among others. Scream Dream is the actresses' first leading role, and all things considered, she acquits herself fairly well here... especially in comparison to the rest of the atrocious cast! 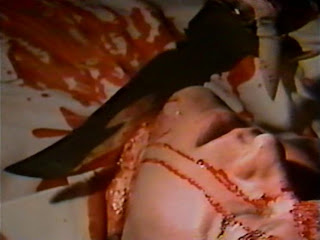 No lame jokes about how cut-throat the music business is, I promise!
.
Things begin when a topless chick lying in bed gets chainsawed between her legs in a 'shocking' music video for bitchy heavy metal queen Michelle Shock (Carol Carr). Michelle is rumored to be a devil-worshipper and once word gets to the press that people have been mysteriously disappearing from her concerts and that her music contains subliminal Satanic messages, she's fired from her band. Michelle turns out to be a blood-drinking demoness who's been murdering her fans. In one scene, she goes down on a guy and bites off his dick. She also has some kind of rubbery little mutant hand puppet cat familiar that kills people. Derrick (Nikki Riggins), a bandmate and former lover of Michelle's (who's now dating a jealous girl named Linnea, played by Michelle Uber), stumbles upon her secret and ends up having to kill her with a medieval axe. Strangely, her dismembered hand takes on a life of its own and must also be stabbed. So band manager Lou (Gene Amonette) decides to replace Michelle with up-and-comer Jamie Summers (Moore). Jamie becomes possessed by the scorned Michelle and, in between overlong musical numbers, morphs into a murderous demon-creature with horns and claws. 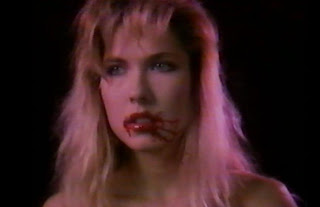 Definitely nothing to write home about. There's cheap gore, lots of charmingly dated hair metal from a group called Rikk-O-Shay, a couple of topless scenes and an unexciting, anti-climactic ending. Make-up artist Rick Gonzales (an assistant to Tom Savini on Day of the Dead) contributes a decent demon costume to the works for what it's worth. So what became of Melissa, you ask? She now trains American saddle-bred show horses, has 50 World Championships to her credit, is the owner and manager of Sunrise Stables and was a 2007 Wilhelmina 40+ Model Search finalist. I guess she's no longer acting, but she still looks great and I'd like to see her in film again. 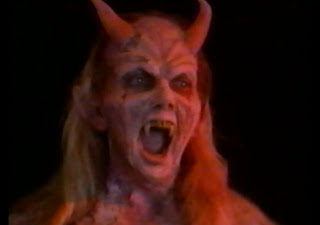 Hide your junk, girlie men!
Tough-to-track down these days, Scream Dream was released to VHS on the American Video label and hasn't been picked up for distribution since. It's so rare that I can't even find a box scan anywhere online. Someone out there hook a brother up!

I think the only movie by Farmer I've seen is CANNIBAL HOOKERS. Nothing like starting at the bottom and wrking up!

Ha! I'd like to thank that guy for not crediting me. I notice he also "borrowed" my review for Cannibal Hookers and who knows what else. I'm sure it happens all the time and I doubt there is anything one can do about it.