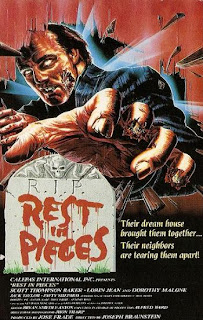 It doesn't happen too often when one gets both a genuine startle and an unintentional laugh right in the opening scene, but that's exactly what happens here when a corpse lying on a slab suddenly sits up. Yeah, I'll admit it. I jumped. They got me. The fact I hadn't really adjusted my volume beforehand probably didn't help matters, but it's an effective little jump scare. Unfortunately, immediately afterward I found myself laughing when a mortician steps in, dryly states "Chemical reflex... often happens" and then pushes the body back down, complete with a creaky, rusty-door-hinge sound effect. So is this supposed to be a comedy? I mean, the title sure makes it sound like a campy zombie comedy, doesn't it? As far as I could tell, no. There are a couple of black comic moments but for the most part this thing is meant to be taken seriously. And it doesn't work very well thanks to a muddled screenplay and an awful performance from the lead actress.
The corpse belongs to a woman named Catherine Boyle, who is played by screen vet Dorothy Malone. Best known for her Oscar-winning performance in Douglas Sirk's torrid melodrama WRITTEN ON THE WIND (1965) and recurring role on the TV series Peyton Place, Malone doesn't have much to do here. As the film opens she's already dead and about to be cremated. Niece Helen (Lorin Jean Vail) and Helen's tennis pro hubby Bob (Scott Thompson Baker) show up to accept their inheritance. Aunt Catherine videotaped her will (and strychnine-in-the-milk suicide) and leaves everything to Helen despite the fact that she hated her mother. The young couple then move to Catherine's estate "Eight Manors;" which consists of eight large homes, six of which are occupied by auntie's refined older friends. None of them pay any rent and all of them behave rather strangely.
.
Soon after moving in, Helen realizes the home is haunted. Cars in the garage take on a life of their own, clothes in a closet move, lights flicker, a piano plays itself and she's tormented by visions of her laughing aunt. After getting some heavy breathing phone calls and almost being drowned in the bathtub by a reanimated shower curtain, Helen finally wants to leave but her husband insists they stay because there's a rumored eight million dollars in cash hidden somewhere on the grounds. The film then seems to completely drop the haunting aspect and focuses instead on the sinister neighbors, who are harboring a secret that involves mass suicide, a mental asylum and reincarnation. It's all confusing, half-assed and doesn't really make much sense. But hey, the bad guys and gals do get to sing "Glory, Glory Hallelujah" and slaughter a string quartet in slow motion, dismember their corpses and dispose of the parts in an oven.
.
Leading lady Vail, a dark-eyebrowed blonde, has a very grating and whiny voice but goes topless on at least five different occasions. This movie certainly would have been a little better with a more capable actress playing the part. Otherwise the film is surprisingly well cast. The actors playing the neighbors are all quite good in their roles and the film is at its best when focusing on them. Amongst the actors are the prolific Jack Taylor (an American expatriate character actor who found success in Mexico and Spain) as a blind former musician who carries around a cane with a retractible blade, Jeffrey Segal as a doctor, Patty Shepard (another American who appeared in quite a few Spanish horror productions), Fernando Bilbao, Daniel Katz, Tony Isbert as a grumpy Nazi gardener and Carole James as slutty maid. Still, what in the hell are these people? Ghosts? Zombies? Reincarnated humans? Hell if I could figure it all out.
★1/2
Posted by The Bloody Pit of Horror at 4:16 PM